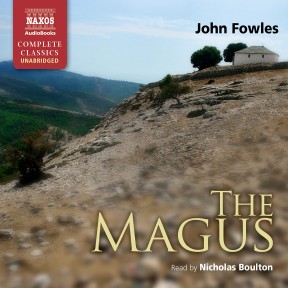 Nicholas Urfe accepts a teaching post on a beautiful, remote Greek island, in order to escape an unsatisfactory love affair. He meets the enigmatic Maurice Conchis, who introduces him to the exquisitely lovely Lily, his ideal of the perfect woman. But is she flesh or fantasy? As the past bleeds into the present, he finds it increasingly difficult to distinguish reality from imagination. Under the spell of this magic isle and its presiding spirit, he struggles to understand the rules of the mysterious game into which he is drawn.

In this remarkable book, John Fowles presents us with a magus, a magician or enchanter, who has the power to manipulate the lives of others. But the real magician is Fowles himself. The Magus is a kind of literary kaleidoscope which the author constantly revolves, showing the reader a new reality with each turn. We become the willing victims of the author’s enchantment, fellow pilgrims with Nicholas the narrator, on the stony, tortuous path of his enforced journey towards self-knowledge.

On its publication the book was a resounding success, which, according to the author, considerably surprised him. In the light of its continuing fascination for succeeding generations, it is interesting to consider the reason for its remarkable popularity.

Although Fowles said that the book contains no message, and describes it as like ‘a Rorschach blot’ in which the reader is free to find his own meaning, the problems it explores, of human love and sexual fulfilment; courage and cowardice; freedom and responsibility; faithfulness and betrayal, are those with which every thinking person struggles in order to find a personal balance for him or her self.

Fowles refuses
to follow a
progression
towards a pat,
banal ending

That struggle is normally at its most intense in youth, and the book is, in a sense, a metaphor for coming of age, which may explain its popularity with a young audience. Nicholas, the narrator, whose story this is, is twenty-four, but maturity is reached at different times by different people, and for some, growing up can take a lifetime. Perhaps some of us never manage it.

The Magus is very much a child of its time: it was written in an era when tension between east and west threatened to unleash an atomic holocaust; when a younger generation was discovering psychoanalysis and eastern religions; when the recent availability of the birth control pill had created a new sexual freedom. The release from the restraints on physical love and from traditional religious dogma created a new freedom which brought with it new responsibilities. The shackles had been removed, and the individual had to find his own way through the moral maze. The book of rules had been jettisoned; new rules had to be written and there was no one to write them but oneself.

Fowles’s stated intention was to create a mysterious, magic world and he writes that he had been influenced by works which included Henry James’s The Turning of the Screw, Alain Fournier’s Le Grand Meaulnes, and Shakespeare’s The Tempest (although I detect echoes of another Shakespeare play, The Winter’s Tale, as well). Bourani is a world where nothing is as it seems; the past bleeds into the present, one person becomes another, cruelty becomes kindness, and
kindness cruelty.

And we, the readers and listeners, are as confused as the protagonist, no sooner accepting one reality than finding it replaced by another. Fowles is a master storyteller, and he reveals his plot with the skill of a conjuror, each new development appearing like yet another Russian doll within the one before.

The Magus is a detective story, but unlike the usual crime novel where the clues all lead towards a neat conclusion, Fowles refuses to follow a progression towards a pat, banal ending. Even the final stage of the story is left for the reader to complete. Conchis is quoted as saying, ‘an answer is always a form of death… I think questions are a  form of life’. Life is complicated and multi-layered, and the author wants his writing to reflect that richness and complexity.

In The Magus, the author is Scheherazade, and like the Sultan, we are agog to hear the next story, to follow each new twist of the plot. But at the same time we have a sense that the book is more than just a captivating tale. It throws us back on ourselves, and we are forced to wonder what we would do in the circumstances we are shown, how we would behave, and whether our behaviour would be in accordance with whatever principles we hold. Like all art which endures, it touches us at a deeper level, and creates echoes within us of our own most profound thoughts and emotions.

When asked to explain the meaning of the book in a letter from a puzzled but intrigued young reader, Fowles refused. But what he wrote in his reply is probably the nearest we are likely to get to an answer:

…the one valid reality or principle for us lies in ‘eleutheria’ – freedom. Accept that man has the possibility of a limited freedom and that if this is so he must be responsible for his actions. To be free (which means rejecting all the gods and political creeds and the rest) leaves one no choice but to act according to reason: that is humanely, to all humans.

The story of The Magus is complicated and difficult to understand. Just like life.