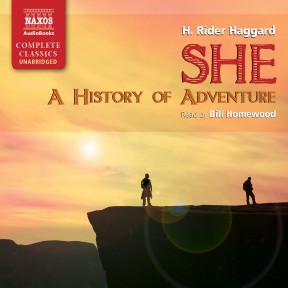 She – A History of Adventure

Somewhere in Africa, a tiny, primitive tribe, the Amahaggers, live secretly amongst the debris of a lost Egyptian civilization, ruled by the beautiful semi-goddess Ayesha, or She-who-must-be-obeyed. Ludwig Horace Holly, a Cambridge academic, is reluctantly drawn into plans for a voyage in search of this legendary queen. With his adopted son, Leo, he sets out on a brave journey, following a trail of clues. Shipwrecked and captured by cannibals, their voyage soon turns into a nightmare. This masterpiece of suspense and adventure, by the author of King Solomon’s Mines, contains some of the most sensual, gently erotic passages in 19th-century literature.

This imaginative classic from the late 1800s is expertly read by Bill Homewood. The story is a first-person narrative that follows the journey of Horace Holly, a Cambridge University professor, and his ward, Leo Vincey, to a lost kingdom in central Africa. After a shipwreck, they encounter a primitive people called the Amahagger in the lost kingdom of Kor and a mysterious white sorceress who reigns as the all-powerful ‘She-who-must-be-obeyed.’ Homewood exquisitely captures the wonders and horrors encountered by these Victorian gentlemen on their adventures. His calm, well-paced reading adds a dimension of reality to a tale of natives, murder, and rage. Modulations of tone and inflection add to a performance that keeps listeners entranced.

Haggard’s years with the Governor of Natal in the 1970s inspired the kernel of this very Victorian fantasy. Cambridge don Holly and his adopted son Vincey are searching for the legendary Queen Ayesha, known as ’She’ by the primitive tribe which the adventurers discover in Africa. This is no boys’ adventure like King Solomon’s Mines – a seductive element of eroticism is woven into the fantastic tale of mysterious clues, reincarnation, cannibalism, suspense and women’s thraldom over men.

Those who have read or listened to Sir Henry Rider Haggard’s King Solomon’s Mines will have felt the emptiness one always feels at the end of a good book – not simply at the sudden loss of a good read, something to while away the time, but rather a kind of bereavement, having spent so many hours in the company of compelling characters. Our narrator, the hunter Alan Quartermain, has become a close friend by the end of the story, having shared with us his heart, as well as his deeds. At the end, of course, we are also suddenly deprived of Africa – Rider Haggard’s Africa – an Africa of magic, mystery and adventure, of wild animals and lost tribes, of Nature at her most red in tooth and claw.

In She we are invited once again to escape into this world, and within five pages are willingly packing our bags to travel with the indomitable Mr Holly, to follow a trail of clues and half-legends, to be shipwrecked, to travel on foot through some of the most forbidding terrain on the planet, to witness cruel torture and death, to be attacked and captured, and, probably breathless with terror, to meet the beautiful semi-goddess Ayesha, the She of the title, richly portrayed as a sort of cross between The Queen of Sheba and Medusa. She presents herself exotically:

‘…Arabian am I by birth, even “al Arab al Ariba” (an Arab of the Arabs), and of the race of our father Yarab, the son of Kahtan, for in that fair and ancient city Ozal was I born, in the province of Yaman the Happy…’

His novels take us
to exotic places,
like those of Kipling
and Stevenson;
but he shares a
love of mystery, of
‘other-worldliness’,
with Wells

Sir Henry Rider Haggard draws liberally on ancient history and legend for the background. His narrator, Ludwig Horace Holly, is an academic and putative Fellow of a Cambridge University college, who presents the tale as a memoir for publication. The story itself is thrilling and rolls along at high speed, often going from triumph to catastrophe in a page. Where the tale steps into areas of superstition or flirts with the paranormal, Holly mitigates any improbability with the insertion of scholarly asides. E.g. the following footnote: ‘The Kallikrates here referred to by my friend was a Spartan, spoken of by Herodotus (Herod. Ix. 72) as being remarkable for his beauty. He fell at the glorious battle of Plataea (September 22, B.C. 479), when the Lacedaemonians and Athenians under Pausanius routed the Persians, putting nearly 300,000 of them to the sword…’ Holly has been drawn into the African adventure when he finds himself the guardian of the son of a friend, who, it transpires, bears a striking resemblance to this Kallikrates.

In his The Da Vinci Code, and in subsequent books, author Dan Brown makes extensive use of cryptic visual and literary clues to lure the reader in as detective. In She, written over a century earlier, the chase is doubly exciting because we are allowed to interpret these and yet be suspicious of them, as Holly himself is. He remains firmly unconvinced that humanity may have as-yet-untapped powers of longevity, until events lead him to question this:

a veiled form was always hovering, which, from time to time, seemed to draw the coverings from its body, revealing now the shape of a lovely blooming woman, and now again the white bones of a grinning skeleton, and which, as it veiled and unveiled, uttered the mysterious and apparently meaningless sentence: ‘…in the Circle of the Spirit life is naught and death is naught. Yea, all things live for ever, though at times they sleep and are forgotten.’

The style is always elegant, and often poetic:

the moon went down in chastened loveliness, she departed like some sweet bride into her chamber, and long veil-like shadows crept up the sky through which the stars peeped shyly out. Soon, however, they too began to pale before a splendour in the east, and then the quivering footsteps of the dawn came rushing across the newborn blue, and shook the planets from their places…

Sometimes the style is elegiac and philosophical:

The sun that rose today for us had set last night for eighteen of our fellow-voyagers!… But one day a sunrise will come when we shall be among those who are lost, and then others will watch those glorious rays, and grow sad in the midst of beauty, and dream of Death in the full glow of arising Life! For this is the lot of man.

As in King Solomon’s Mines, Haggard is perfunctory in his descriptions of animal deaths. However, when it comes to humans, Haggard spares us very little detail, though Holly’s self-deprecation at times rescues us from the horror:

Lying on my back there, so that their bodies might protect me from spear thrusts from above, I slowly crushed the life out of them, and as I did so, strange as it may seem, I thought of what the amiable Head of my College at Cambridge (who is a member of the Peace Society) and my brother Fellows would say if by clairvoyance they could see me, of all men, playing such a bloody game.

The comical, anachronistic references to home may make us laugh, but they add to the tension. On encountering his first cannibal, Holly is outraged:

‘In our country we entertain a stranger, and give him food to eat. Here, ye eat him, and are entertained.’ ‘It is a custom,’ he answered, with a shrug, ‘…but then… I do not like the taste of strangers, especially after they have wandered through the swamps and lived on wild-fowl.’

ankles more perfect than ever sculptor dreamed of …I might talk of the great changing eyes of deepest, softest black, of the tinted face, of the broad and noble brow… a godlike stamp of softened power, which shone upon that radiant countenance like a living halo…

It would not be a fruitless exercise to analyse this in the light of the sexual politics of Victorian, and even early 20th-century, England. In the character of Holly we have a man who, by his own admission, is ‘branded by Nature with the stamp of abnormal ugliness…’ This man never hopes to experience reciprocal love, and yet is allowed intimate time with the goddess. The episode is moving because – such is Haggard’s skill – we admire Ludwig Horace Holly for his courage, his candour and his humility, and he deserves to be loved. By the end of the book, Ludwig Horace Holly, now a Fellow of his Cambridge college, seems to us a great man, and our friend.

Henry Rider Haggard was born in 1856. His mother was an amateur novelist and his father a barrister and country gentleman. Henry was sent to Ipswich Grammar School, before taking a post in South Africa as secretary to Sir Henry Bulwer, Governor of Natal. At the age of 22 he was appointed Registrar of the Natal High Court, at which time he fell in love with an African woman, and became fascinated by Zulu culture and traditions. It is interesting that both King Solomon’s Mines and She feature a loving, brave, black African woman. He returned briefly to England and married a Norfolk heiress, Mariana Louisa Margitson, taking her back to South Africa where they ran an ostrich farm. Eventually, with the intention of pursuing a career in the law, he moved back to Norfolk with Mariana, and was called to the bar at the age of 28.

Perhaps there was more of his mother in him than his father, for it was not long before he gave up his practice in order to write novels of adventure and discovery. He was excited by R.L. Stevenson’s Treasure Island, published in 1883, and wrote King Solomon’s Mines in less than a week. She, with its cryptic clues, facsimiles, hieroglyphics, Latin and Greek sections, took six weeks. He dedicated the book to his friend, the mythologist and writer Andrew Lang. Haggard became an expert agriculturalist and, among the 40 books which he wrote in a long career were several on farming. For his services to the British Empire, both diplomatic and agricultural, he was knighted in 1912 and awarded the KCBE in 1919. He died in London in 1925.