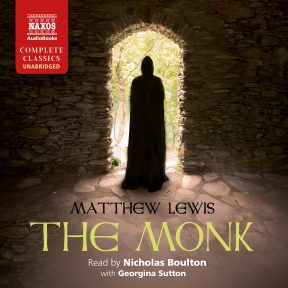 A masterpiece of gothic  fiction, The Monk is a cautionary tale of madness, horror, lust and despair. Father Ambrosio, the most pious and venerated monk in all of Madrid, is held as a paragon of virtue. But after thirty years of study and prayer, evil thoughts begin to permeate his mind. As two plots cleverly converge, torture, murder, incest, rape, poison and magic prevail, sustained by an elegance in the writing of the nineteen-year-old Matthew Lewis. The book was banned upon its initial publication in 1796 but later caught the attention of Lord Byron and Samuel Taylor Coleridge, with Coleridge naming it ‘the offspring of no common genius’.

This classic gothic novel is filled with mystery, romance, and horror. Narrators Nicholas Boulton and Georgina Sutton tell Matthew Lewis’s sordid tale of a monk who was left at the steps of an abbey as a baby and the strange cast of characters he is surrounded by as an adult. Boulton and Sutton share the storytelling, each bringing his or her best to the performance. This tale of lust and madness is shocking by 18th-century standards and still spine-tingling today. The listener will quickly be drawn in by Boulton and Sutton’s expert delivery. Originally banned, The Monk still ranks as a premier gothic thriller filled with the love triangles and dark secrets of priests, nuns, and politicians.