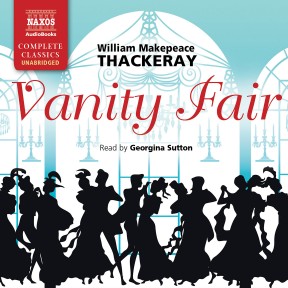 Vanity Fair, with its rich cast of characters, takes place on the snakes-and-ladders board of life. Amelia Sedley, daughter of a wealthy merchant, has a loving mother to supervise her courtship. Becky Sharp, an orphan, has to use her wit, charm, and resourcefulness to escape from her destiny as a governess. This she does ruthlessly, musing: ‘I think I could become a good woman, if I had £5,000 a year.’ Thackeray’s story is set at the time of the battle of Waterloo, in which the Sedley fortunes are lost – and Amelia is back to square one – while Becky rises with contemptuous ease.

Parentless heroines were typical of the age. Georgina Sutton’s sparklingly fresh narration of Vanity Fair is a marvellous way to follow the fortunes of the orphaned Becky Sharp, surely the most ingenious, resourceful and wicked woman in all literature. The book, set in 1812 and written in 1847-48, is a Regency-born Victorian’s critique of exactly the social whirl that Thomas Day abhorred; it also gives a fine account of the British Army’s setbacks before their ultimate triumph at Waterloo. Don’t be daunted by its price and length. Get a monthly subscription to a download library such as Naxos or Audible, or borrow it from your local library, many of which now offer free download services, and listen on your computer, iPod or phone. As to its length, think of it as a soap opera, to be taken in daily doses like The Archers: keep it for your daily commute, jog or dog walk, and enjoy deus ex machina Thackeray’s clever and character-driven twists and turns to the full.

The characters in this complex 19th-century novel (scheming, amoral Becky Sharp; faithful William Dobbins, etc.) were once so well known that they were used as shorthand personality descriptors by other authors. Becky Sharp is willing to do almost anything for position or money, while family funding supports her best friend Amelia’s, gentle, unrealistic soul. Becky marries well and then loses money. Amelia marries well and loses both husband and money. As time passes, their fortunes flip, turn, and intertwine until the two friends are old women. Georgina Sutton’s wonderfully flexible voice keeps the reader engaged and the characters well differentiated through all 25 CDs of a very complicated storyline – quite a feat. Especially recommended for listeners just starting to explore classic British fiction.

I can’t tell you how much fun it is to embark on the good ship Vanity Fair, up and down, round about, weaving in and about these characters in and out of 1825 England. It drifts into a drama of dozens of people who come to be friends of ours or, at the least, comic relief.

We get a few side trips into the countryside, and then over to Belgium (Waterloo), and Germany (Pumpernickle). Travelling with an excellent plotter, plotting to lead you through the triple drama of Becky Sharp and her many men, along with Amelia Sedley, George Osborne, William Dobbin.

What is it here that 150 years later captures us so. Innocence and greed? Infidelity? Using others? Being at times noble, at times beasts of property and rank? (One of the characters says of Becky, ‘I thought her a mere social climber, but now I see she’s a mountaineer.’)

I read Vanity Fair in college, and a lot went over my head, especially the darker edges of cynicism. Thackeray is a lovely old cynic, but it does take the time to plow through it. As it is being read to me – Georgina, you’re a dream – I am thinking that Thackeray was one of those people who could put together a story and some people and a chain of events that doesn’t want to let us go. I was a goner the moment I popped in disk #1 (there are twenty-five in all). When I was out of radio contact, I picked up the book, and laughed and cheered on my favourite characters, stolid Dobbin, fat, drunken Jos, and, as always, sly Becky. Thackeray certainly didn’t love her, but I do.

Richard Saturday, The Review of Arts, Literature, Philosophy and the Humanities

Although all the characters in Thackeray’s famous ‘novel without a hero’ ultimately disappoint in terms of heroic attributes, they provide a telling view of Victorian high society. Georgina Sutton’s colourful narration provides an enjoyable medium for listeners to experience this literary classic. She masters the irony of the author’s narrative voice with careful attention to his intonation. Her vocal characterisations are skilful. She creates the kindly lisping voice of Dobbin with as much ease as the sinister cadence of Lord Steyne. The character of Becky Sharp is as dynamic in Sutton’s reading as she is in upper society. Witty, cutting, and ingratiating in tone, Sutton’s portrayal ably captures this society darling. While addressing the nuances of Thackeray’s prose, Sutton produces an entertaining trip through a metaphorical ‘vanity fair’.

Vanity Fair, Thackeray’s greatest work, was published serially from 1847–48, a searing satire set earlier in the century during the Napoleonic Wars. Imagine a Fair set in 1804 with all the human foibles on display seen to advantage from a giant Ferris wheel. Some characters are up, then their fortunes change and they are brought low. Others begin at the bottom but claw their way to the top only to be thrown down again. The two main characters are Amelia Sedley, naïve but cloyingly good-natured daughter of a wealthy merchant and Amelia’s old school chum Becky Sharp, a poor orphan who is amoral and cunning. Others are Rawdon Crawley, Becky’s husband by whom she bears a son and his older brother Sir Pitt. Captain George Osborne is Amelia’s fiancé and finally beloved husband. She bears him a son after he dies at Waterloo and she worships his memory. Amelia’s brother Joseph is a clumsy and boastful civil servant whom Becky initially hopes to marry. Becky will marry any man with money. Major William Dobbin is Amelia’s faithful admirer who hopes she will eventually forget Osborne. Amelia’s father goes bankrupt and she lives in genteel poverty with her parents, giving up her spoiled son to a wealthy relative to bring up. Becky abandons her son to relatives because she doesn’t care about anyone but herself. The lives of these characters intertwine for years as Thackeray exposes the greed and hypocrisy of the era. The novel is enacted by British narrator Georgina Sutton, who trained at the Webber Douglas Academy of Dramatic Arts. She has toured extensively to repertory theatres around the UK. Since the story meanders around Europe, Sutton gives the novel a full-voiced reading including many accents (German, French, Spanish, Irish, etc.). Her children are a joy and Lord Steyn has a wonderfully nasal sneering voice. So if you crave 19 chapters with selfish, detestable, malicious and vain characters, this novel is required reading and a classic which is highly recommended.

In its clear-eyed detachment, Vanity Fair seems to belong more to Henry Fielding’s eighteenth century, than to the era of Dickens. Yet William Makepeace Thackeray (1811–1863) had more in common with his great contemporary than the differences in their work might suggest. Born within a year of each other – Thackeray in Calcutta, Dickens in Portsmouth – they both had cause to feel rejected by their mothers. Thackeray’s father – a rich ‘collector’ – died before he was six: the widow promptly sent her boy to England to be educated and she soon remarried. Dickens’s mother saw no injustice in sending her talented boy to work in a factory when her husband was jailed for bankruptcy.

After Charterhouse and Trinity College, Cambridge, Thackeray studied art in Paris, where he gambled away his inheritance. He then toyed with law, but was driven to journalism to support his family. Under a series of pseudonyms he wrote verse, burlesques and parodies for a variety of periodicals.

Most of his
novels are
little read,
and details
about his
life remain
scanty

He married at 25, but after four years his adored wife became incurably insane; she spent the rest of her life in a mental home, leaving him with three little daughters to maintain. After his unhappy married life, Dickens separated from the wife he had found dull company. Both he and Thackeray had mistresses, both lectured in America, and both died suddenly, leaving unfinished novels.

But here the similarities end: whereas Dickens was a true Victorian, Thackeray felt he had been born too late. All his novels, apart from Vanity Fair, are set in his beloved eighteenth century and are underpinned by uncannily accurate historical realism.

Vanity Fair – the first novel he published under his own name – appeared in monthly installments in 1847–8. It is set in the Regency period, during and after the battle of Waterloo. As a child, when his ship called at St Helena en route for England, Thackeray had seen Napoleon walking in the gardens of Longwood: this memory surfaces in the novel.

Thackeray claimed he simply woke up one day with the title Vanity Fair in his head. In the preface – The Curtain Rises – he invites his audience to ‘step in for half an hour and look at the performances’. He ends his novel with the words ‘Come children, let us shut up the box and the puppets, for our play is played out’. He may have been detached from mankind but never his marionettes. There is little sentimentality in his approach; any inconsistencies and awkward time shifts must be partly due to his having written the novel in serial form.

If the central character in Thackeray’s Barry Lyndon is a Fieldingesque anti-hero, Becky Sharp is no less an anti-heroine. Full of guile and treachery, outwitting her opponents as she climbs the social ladder, she clearly fascinated her creator as much as she delights and amuses the reader. This Circe breaks necks in her ruthless ascent, but she captivates in the process.

Thackeray’s Book of Snobs was a hilarious exposé of the hypocrisy of early Victorian society: a similar satirical view permeates Vanity Fair. Amelia Sedley is introduced as ‘a dear little creature’ but the author’s attitude to her is deeply ambivalent: he first praises her tenderness and devotion, then adds that ‘Vanity fair is yawning over it’. Incapable of appreciating the altruistic love of Captain Dobbin, she finally becomes ‘our little simpleton’.

Before his death, Thackeray instructed his executors not to publish any biography. Most of his novels – he wrote six – are little read, and details about his life remain scanty. But in recent decades his reputation has begun to rise, thanks in part to Stanley Kubrick’s superb film of Barry Lyndon. In life, Thackeray never achieved either the fame or the fortune of Dickens. Perhaps, in these disillusioned times, his hour has finally come.