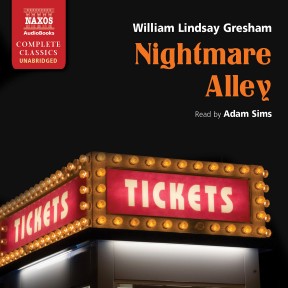 Stanton Carlisle is smart, good-looking and ambitious. Among the outcasts, freaks and geeks of the Ten-in-One sideshow, he learns that the public is there to be gulled, and he learns how to do it. Amoral and brilliant, he aims for the brighter lights of vaudeville before a much bigger coup faking spiritualism for the rich. But his own dark fears haunt him, and he is not the only one taking advantage of terror and desire. Published in 1946, Nightmare Alley is a noir classic – at once a vivid insight into the sub-culture of the carny, and a bleak and gripping fable.

Almost anyone can be a publisher if they are wiling to read widely, exercise good taste, and take a few risks. Naxos AudioBooks, which has pioneered great versions of Finnegans Wake, and the works of Jane Austen, is branching out this month with a 10-hour recording of William Lindsay Gresham’s Nightmare Alley. William Lindsay who? I’d never heard of this forgotten Americancorrect crime writer, briefly married to Joy Davidman (who, later, was the doomed wife of C.S. Lewis). In its day, Lindsay’s highly original portrait of the dark side of the American dream, seen through the desperate world of carnival sideshows, was a hit. Read by Adam Sims, it makes for an enthralling listen for a long car journey. Hats off to Naxos for the discovery.

This extraordinary and mesmerising 1946 cult novel was born of the author’s lifelong fascination with the sophisticated tricks behind American carnival and the sideshows of Coney Island. Its clever and ambitious protagonist, Stan Carlisle, learns how to dupe the gullible public, and sets out to make huge bucks from faked spiritualism. He treats others as ruthlessly as he was treated as a child, but is plagued by his own demons which are as destructive as those he conjures. Matched by a spectacular narration.

Gresham’s little-remembered noir masterpiece deserves a whole new generation of readers, and Adam Sim’s dark performance is a marvellous way to reach them. The story begins in a carnival, which provides a narrator’s dream assortment of characters. Though some are unmistakably comic, Gresham’s vision is anything but lighthearted. His protagonist, Stanley Carlisle, is a mind reader cum spiritualist who preys on the lonely and despairing without recognising the blackness at his own centre. Sims is alive to the tragedy of Carlisle but never seeks to soften him. He coldly follows Carlisle on his unmerciful path – right to the devastating but inevitable end.

Gresham’s little-remembered noir masterpiece deserves a whole new generation of readers, and Adam Sims’s dark performance is a marvellous way to reach them. The story begins in a carnival, which provides a narrator’s dream assortment of characters. Though some are unmistakably comic, Gresham’s vision is anything but lighthearted. His protagonist, Stanley Carlisle, is a mind reader-cum-spiritualist who preys on the lonely and despairing without recognising the blackness at his own centre. Sims is alive to the tragedy of Carlisle but never seeks to soften him. He coldly follows Carlisle on his unmerciful path – right to the devastating but inevitable end.

William Lindsay Gresham’s Nightmare Alley is noir at its finest. Originally published in 1946, this reissued audiobook is a pinnacle of the genre.

Stanton Carlisle wants what most everyone does, fame and fortune. The American dream. He will stop at nothing to achieve it. Working his way up from an amateur sleight-of-hand artist in the traveling Ten-in-one shows, to a successful fake mind-reading act in vaudeville, the more he gets, the more he wants. Together, he and his wife Molly start a ministry where they attract wealthy ’marks’ for séances to contact loved ones in the afterlife. All Stanton and Molly need is one big score, and they’ll be set for life. But greed is a dangerous thing, and sometimes, if you’re not careful, the tables can turn on you.

With stark detail, Gresham shows the life of a traveling carnival. Every detail of the ups and downs is chronicled, along with characters so real to life that they could jump off the page. Including some of the best dialogue in fiction. You could tell he really knew the subject well, and that shows through in spades. His insight into human psychology, and the vernacular of the times, really make this novel powerful.

I listened to this audio version and found the narration by Adam Sims extremely satisfying. He had a different voice for each character’s dialogue, and I found that it enriched the story nicely.

I truly believe this to be one of the best noir novels I’ve ever read (or listened to). It’s a shame the author didn’t write but two novels, but there is also something fitting about that as well. It seems to make this book all the sweeter. Highly recommended.

Nightmare Alley is written with such conviction, feels so completely expe-rienced, that it is almost a disappointment to discover that its author wasn’t a sideshow huckster. But then Nightmare Alley has more to it than merely desperate showmen on the underside of the American dream; and it can be easy to overlook, especially in a work regarded as pulp even when it was a success, that the author plotted, planned and prepared it, crafted its set pieces and laced its themes throughout the story, using a series of narrative tricks (some quite daring in a populist work) to involve and engage the reader. He was, after all, a writer. And there is still plenty in Gresham’s life – especially after the book was published – which allows Nightmare Alley to serve as a resonant metaphor if not autobiography.

Early in his life, when the family moved to New York, Gresham encountered the sideshows and cheap thrills of the carnivals at Coney Island. He became fascinated by the culture, mesmerised by the oddities of humanity that could make a living out of being abnormal. One well-dressed man had a small, headless vestigial body, also well-dressed, hanging from his stomach. This seemed to Gresham like a much better way to make money than his father’s factory job, although – lacking a freakish body to display for cash – he found that his calling was to take some years yet.

The fascination remained, though, and he became familiar with the tricks and customs, argot and way of life that typified the carny world. He took on a series of jobs (including some associated with the carny) – a stint working for a newspaper, even singing in folk groups round the bohemian edge of New York. He was married briefly; and then married again to a wealthy socialite in a match that lasted nine years, despite the apparent disparity. But he was still searching for something – or running from it, perhaps. His parents had divorced and he lacked self-confidence. He must have begun to sense those personal uncertainties that would spark his years of analysis, chasing the alchemical formula that led him to Marxism, alcoholism, Christianity, the Tarot, Buddhism, Ouspensky, Dianetics – anything that might soothe or explain his unnamed terrors.

He joined the Communist party in 1936 and went to help fight in the Spanish Civil War. While waiting to return, he fell into conversation with a man called Halliday (or a doctor called Faraday – accounts differ) who told him one of the darkest secrets of the carny: the geek, a man so ruined by alcohol addiction that he will put up with being displayed as an almost inhuman wild man, eating live chickens and snakes, just to be sure of his next bottle of hooch. The story stayed with him, stirring an imaginative revisioning of a deeper story – of man’s constant terror, of his endless flight towards sanctuary. This was at the heart of Nightmare Alley; indeed, it is the alley – the chasing steps of the nightmare as you run towards a patch of light that will forever recede.

Gresham had TB when he returned from the war, and his second marriage failed as his neuroses took over. He attempted suicide, but the hooks on the closet holding his noose gave way. And then he met and married Joy Davidman, a poet and Communist, with whom he had two children. Gresham was beginning to establish himself as a writer of sorts, editing a true-crime magazine, but his childhood fascinations and that story from his comrade in the war gave him the material he wanted for a much broader piece of fiction. Davidman’s guidance and assistance must also have been instrumental in helping him create the final work. She said of her later marriage to C.S. Lewis that she was no writer compared to him, but was able to make him write more like himself; something similar seems to have worked with Gresham, and he dedicated the book to her.

Nightmare Alley was a hit, and was sold to Hollywood with Tyrone Power fighting for the chance to play the lead. But the producer thought, even in its slightly Bowdlerised form, it would tarnish Power’s image (which it probably would have) and released it as a B-movie, limiting its impact considerably. Within a short while, both film and book were largely forgotten. The money did not last either: tax problems and overspending meant the family was largely without funds. Gresham wrote one other novel, based around his time in a TB ward, but it failed. Two of his other works are rather better thought of, but no more popular – Monster Midway, a non-fiction account of the world of the carny, and Houdini – the Man Who Walked Through Walls, a revisionist biography of the great magician and illusionist. And before these came out, his personal life was in painful turmoil.

Unwell, drinking heavily, unfaithful, losing belief in Marxism and no doubt himself, he found his marriage to Davidman collapsing. Its demise was not helped by his affair with Davidman’s cousin, whom Davidsman had asked to help Gresham while she herself went to England; she was suffering her own crisis of faith, and converted to Christianity (her later marriage to C.S. Lewis was the subject of the play and film, Shadowlands). Gresham married the cousin, Renée, and this final marriage seems to have been a success. Although he never wrote anything to match Nightmare Alley, he managed to keep afloat as a freelance, sometimes editing, sometimes contributing, writing short stories and radio pieces; he maintained contact with Davidman until her death, and with their sons until his own death. There is a suggestion that whatever woke his demons was for a while silenced. But it wasn’t for long. In 1962 he was diagnosed with cancer: he went to the Dixie, a rundown old showfolks’ hotel in New York, where, having checked in under an assumed name (that of an uncle), he took an overdose of sleeping pills and died.

Nightmare Alley is not an autobiography, and it is not a moral health-warning. It is a work of fiction that uses all a writer’s craft to tell its story and draws its core from a broad experience of life. That is why it feels so personal but has a universal appeal. For Gresham, we are all running down the same alley, with the same fears and much the same chance of finding Nirvana at the end of it.