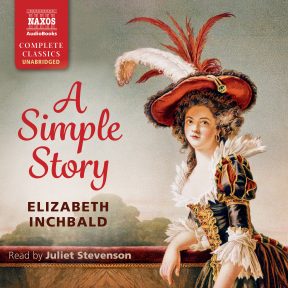 Published in 1791, A Simple Story concerns Miss Milner, who announces her passion for her guardian, a Catholic priest, thereby breaking through the barriers of his religious vocation and society’s standards for proper female behaviour.

Central themes of the novel include the importance of proper education for women. Elizabeth Inchbald was a dramatist and actress and this can be detected in her narrative, particularly her lively dialogue. The novel was well received on its publication, with one reviewer writing that ‘Mrs Inchbald has discovered the true path which she ought to pursue’.

In several respects A Simple Story anticipates the writing of Jane Austen, especially in Inchbald’s concise and ironic style. Here it is given a delightful reading by the acclaimed actress Juliet Stevenson.

The politically radical actress Elizabeth Inchbald (1753–1821) was most famous as a writer of melodrama (in Jane Austen’s Mansfield Park, prim little Fanny thought her racy Lovers’ Vows a most unsuitable choice for her cousins’ amateur dramatics). Melodrama also marks the lively dialogue of her 1791 novel A Simple Story and Juliet Stevenson has huge fun with its characters: the dry-as-dust Catholic priest Dorriforth, his flirtatious and giddy ward Miss Milner and the valiant young Harry Rushbrook. Respectively barking and bleating advice from the sidelines are the Jesuit Mr Sanford and Miss Milner’s companion Miss Woodley.

Expect the unexpected: Dorriforth recommends his ward emulate a certain Miss Fenton, ‘young, of exquisite beauty, elegant manners, gentle disposition, and discreet conduct’; naturally, she loathes her on sight and continues to go her own rebellious way. When he inherits the Catholic Elmwood earldom and fortune and his vows are remitted by Rome, he proposes to Miss Fenton, but ends up married to someone quite different.

Inchbald, however, is not Georgette Heyer – the story doesn’t end on a note of frothy romance. After several years of marital misery, Elmwood becomes a curmudgeonly widower and we have a new heroine, their benighted daughter, Matilda, whose father’s neglect leaves her prey to London’s most notorious rake.

Published in 1791 and popular in its day, Inchbald’s novel centers the lives of a mother and daughter, each with a story told years apart. Both tales are heavily plotted with melodramatic flair, but essentially are stories of women: the choices they have, and have not, the way they are educated, their passions, and their constraints. The first half of the novel focuses on a Miss Milner, who eventually becomes the wife of her guardian, a former Catholic priest and a member of the British aristocracy. The second follows her daughter, estranged from her father until a terrifying event makes him realize the consequences of his pride. Inchbald, a self-made and successful actress, playwright, and author, gives narrator Juliet Stevenson plenty to work with, especially well-crafted dialogue. The talented Stevenson shines, helping listeners sink into the story; her narration showcases her skill with pitch, tone, and nuance and infuses emotion into each perfectly timed sentence.