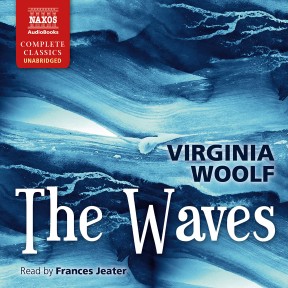 The Waves traces the lives of six friends from childhood to old age. It was written when Virginia Woolf was at the height of her experimental literary powers, and she allows the characters to tell their own stories, through powerful, poetic monologues. By listening to these voices struggling to impose order and meaning on their lives we are drawn into a literary journey which stunningly reproduces the complex, confusing and contradictory nature of human experience. 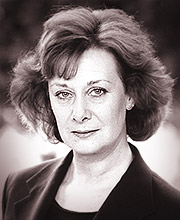 Frances Jeater ’s theatre work has included Gertrude in Hamlet; an American tour of Much Ado About Nothing; Middle and Far East tours of Harvey; and Prisoner of Second Avenue, Haymarket Theatre, London. Favourite TV: Gift of the Nile, filmed in Egypt. Frances has always enjoyed working for BBC Radio Drama and recording audiobooks. She read Chaucer’s The Wife of Bath’s Tale in The Canterbury Tales II, the part of Mrs Eynsford Hill in Pygmalion and also part of Great Explorers of the World for Naxos AudioBooks.

Virginia Woolf was born in 1882, the daughter of editor and critic Leslie Stephen. The early part of her life was dogged by bereavement. Her mother died in 1895, her stepsister two years later in 1897, her father in 1904 and in 1907 her favourite brother Thoby died of typhoid. These losses left her traumatised and prone to bouts of depression which continued throughout her life.

After teaching for a time at a college for working women in south London, Virginia began to write reviews for The Times Literary Supplement and with her sister, the painter Vanessa Bell, she became part of a group of radical writers and artists that included Lytton Strachey and Roger Fry, who were later to be known as the Bloomsbury Group. One of this group was Leonard Woolf whom she married in 1912 and together they founded the Hogarth Press, whose list included such influential literary figures as T.S. Eliot and Katherine Mansfield.

Overcome by fear
of another attack
of depression,
Virginia Woolf
drowned herself

Her first two novels, The Voyage Out (1915) and Night and Day (1919), did not indicate emphatically any new departure from the traditional form of the novel, but in 1919, in her essay The Modern Novel, she expressed her dissatisfaction with the form:

Examine for a moment an ordinary mind on an ordinary day. The mind receives a myriad of impressions – trivial, fantastic, evanescent, or engraved with the sharpness of steel. From all sides they come, an incessant shower of innumerable atoms, and as they fall, as they shape themselves into the life of Monday or Tuesday, the accent falls differently from of old… so that if the writer were a free man and not a slave, if he could write what he chose, not what he must, if he could base his work upon his own feeling and not upon convention, there would be no plot, no comedy, no tragedy, and no love interest or catastrophe in the accepted style…

From the publication of Jacob’s Room (1922), Virginia Woolf began to perfect her distinctive style which attempted to convey the true nature of experience: life as ‘a luminous halo, a semi-transparent envelope surrounding us from the beginning of consciousness to the end’. She continued to experiment with style in Mrs Dalloway (1925) and To the Lighthouse (1927) but it was in The Waves, published in 1931, that she succeeded in achieving the goals she had set herself in 1919. The soliloquies of the six characters are set in the context of nine poetic passages describing the sun’s progress over the sea from first light to night and the changing seasons of the year, thus giving a framework to the whole. We are presented with a set of characters, three men and three women, taken up at selected points in their lives beginning with childhood and ending with old age and the death of Bernard.

Louis is an Australian. As an outsider who is ashamed of his accent, he is keen to make deep and lasting connections to England; he feels his ‘roots going down into the earth’. He is aloof and formal, and acutely aware of the cruelty of life. But he is also voracious ‘like some vast sucker… some insatiable mouth’. He becomes a successful businessman and has an affair with Rhoda. In contrast to Louis, Rhoda ‘has no body as the others have’. She clings to material objects such as the end of the bed to stop herself from disintegrating. She feels she has no face and suffers from pathological shyness. When she commits suicide she achieves the ultimate act of self-effacement. Susan, however, is fully present. She feels part of the natural world of trees and fields. Chary of abstract concepts, she understands ‘cries of love, hate, rage and pain’. She marries a farmer and becomes a mother. Jinny, however, uses her physicality in a different way. She lives a wild and promiscuous life in London, moving rapidly from one lover to the next. Unlike Rhoda, she seeks out her reflection, until in later life, when her looks have gone, she is forced to face the fear and loneliness of old age. For Neville the world is a disordered place which needs to be brought under his control. He is a bookish homosexual in love (as are the others) with the heroic Percival. He is constantly haunted by the fear of loss and lives a guarded, contained life with his lover. Bernard, like Louis, becomes a prosperous businessman. He marries and has a family and uses his experiences to weave stories. He suffers from frustration, when somehow ‘dabbling in warm soluble words’ does not allow him to express himself with the precision he craves. He is rendered silent at the end of the book when he finally loses his battle against death.

There is a rendering, vivid almost to the point of hallucinatory, of the bustle of everyday experiences refracted through the consciousness and obsessions of each character. In this way the novel explores the relationship between past and present, the aspirations, insecurities, neuroses and contradictions of the characters, and how we all struggle to find meaning in the complex swirl of human experience while constantly hearing the waves crashing on the shore reminding us of our mortality.

In 1941, after completing two more novels, The Years (1937) and Between the Acts (1941), overcome by fear of another attack of depression, Virginia Woolf drowned herself.