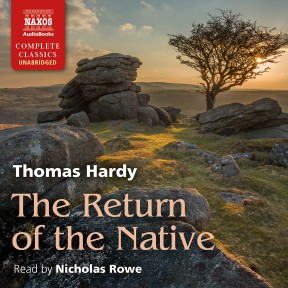 The Return of the Native

In the remote wildness of Egdon Heath, the crossed love affairs and marriages of a small group of people are played out against the background of nature’s beauty and indifference to mankind. Through a series of vivid incidents and encounters, The Return of the Native moves in a relentless drive towards tragedy, as the plans and dreams of the lovers miscarry, defeated by chance, or destiny or self-deception. In their unhappy stories, Hardy gives us a powerful dramatisation of his bleak philosophy, his belief in man’s helplessness before the malevolence of the universe.

Clym Yeobright is the returning native, but the story’s real protagonist is Egdon Heath, against which mere mortals live out their lives, blighted by desires and disappointments: Thomas in loving duplicitous Wildeve; sensual Eustacia marrying intellectual Clym, imagining him to be her passport to Paris. All is observed by Venn who, along with the red-ochre pigment he peddles, is part of enduring nature. The narration captures Hardy’s melancholy whilst creating a good pace as the drama unfolds.

A story of isolation, passion, and misplaced lovers, Hardy’s classic novel is moving and enigmatic. The almost druidic nature of the fictional Egdon Heath sets an ominous atmosphere that permeates the novel. Nicholas Rowe’s narration is both subtle and resonant. He has a soft, melodic way of speaking that resonates with Hardy’s vivid descriptive style. Rowe’s steady pace throughout the reading allows the listener to take in the complex images that Hardy creates through meticulous diction. Rowe also captures the characters expertly. The passionate Eustacia speaks hurriedly and emphatically while the removed Wildeve embodies disinterest and brevity in his speech. Through Rowe’s compelling performance, this production is a masterful portrayal of Hardy’s haunting novel.

It was at present a place perfectly accordant with man’s nature – neither ghastly, hateful nor ugly: neither commonplace, unmeaning, nor tame; but, like man, slighted and enduring; and withal singularly colossal and mysterious in its swarthy monotony. As with some persons who have long lived apart, solitude seemed to look out of its countenance. It had a lonely face, suggesting tragic possibilities.

These words offer us an image of mankind as resembling a bleak tract of moorland, and they could only have been written by one English novelist: at the same time powerful and obscure, poetic and awkward, they exemplify Thomas Hardy’s idiosyncratic use of language, and more importantly they take us close to the uneasy heart of his philosophy. They are taken from the well-known opening chapter of The Return of the Native, and the place they describe is Egdon Heath. This stretch of wild heathland in Dorset is half-fact, half-fiction, a sparsely inhabited place, possessing a strange, bleak beauty, which forms the setting of the novel. The heath symbolises the harsh grandeur and impersonality of nature, the background against which the human stories in the book are played out.

The other great Victorian novelists – Thackeray, Dickens, Eliot and Trollope – presented rich panoramas of the society through which their characters moved, but Hardy had a more elemental concern: to look beneath the surface of life to the patterns which time and fate weave, and against which the individual struggles helplessly. In Hardy’s fiction, men and women are at the mercy of their own irrational impulses, and of blind chance. The result is a picture of a malevolent universe, which first plays with, then crushes its human inhabitants, whose pathetic attempts to find happiness are swept away in misfortune, or tragedy. Written over a period of twenty-five years, Hardy’s dozen novels grow increasingly pessimistic, his universe ever more irrational and godless. His novels entertained, then puzzled, then shocked many readers of his time, who asked what they might mean, both philosophically and in terms of the author’s own life. The critic Edmund Gosse famously questioned, ‘What has Providence done to Mr Hardy that he should rise up in the arable land of Wessex, and shake his fist at his creator?’ Hardy himself never answered the question, and no real answer emerges from the story of his life.

The parallel
with Lear is
far-fetched,
but the novel
is one of
Hardy’s finest

Hardy was born in the village of Higher Brockhampton near Dorchester in 1840, the son of a stonemason. After leaving school at fifteen, he was apprenticed to a local architect, where he worked for some years before moving to London to continue his career. In his youth he possessed a strong religious faith, and even dreamed of ordination and a life as a country clergyman. These ideas faded rapidly and he became a convinced atheist. His early novels, written around the age of thirty, were sufficiently successful to enable him to become a full-time writer. He returned to Dorset and soon married Emma Gifford. This proved a childless marriage, which later descended into estrangement and mutual bitterness. Rumours of earlier, unhappy love affairs have never been substantiated but offer a possible explanation for his habitual depiction of love as both transient and tormenting. Hardy abandoned novel writing in the mid-1890s, after the adverse criticism that greeted Tess of the d’Urbervilles and Jude the Obscure, which were accused of being irreligious and immoral, and devoted himself to poetry. His poetry was distinctive and original: much of it embodied the same bleak philosophy as his novels, but it is redeemed by its great metrical skill and variety of verse forms, and by an intimate sense of nature and rural life. Emma Hardy died in 1912, and two years later he married Florence Dugdale, a much younger woman who had been acting as his secretary. After Hardy’s death in 1928, she published a rather unrevealing biography of him, which most experts believe was written by Hardy himself.

In most of his novels, the themes of unhappy love and tragic circumstances are counterbalanced by poetic evocations of rural scenes, and by affectionate portraits of rustic characters, which comment on the action, like a homely version of the Greek chorus. These rustics seem able to avoid suffering and life’s disillusionment by avoiding love, passion, ambition and striving, their lives following a patient, timeless pattern. The leading characters in the novels are always a step or two higher in the social scale, and their lives are more complex and therefore more vulnerable to misfortune or tragedy. Hardy’s Wessex setting was something genuinely original in English fiction, its local colour was immensely appealing, and his use of it to promote his atheistic and pessimistic view of the universe was intriguing and provocative. However he also wrote a number of very different, lighter books, novels of society (A Pair of Blue Eyes, The Hand of Ethelberta, A Laodicean, etc.), which now seem artificial and dated. He seems in fact to have written them as a respite between his more serious and tragic works. Hardy was always widely-read, admired, discussed and criticised, always seen as a major figure: he was loaded with honours in his final years and accorded the ultimate tribute of burial in Westminster Abbey. By 1928, the year of his death, almost forty years and a shattering war had intervened since Tess, and the beliefs and prejudices of the 1890s were fading from memory.

The Return of the Native was published in 1878, as Hardy’s fifth novel and the first of what he himself termed tragedies of character and environment. It is the story of the crossed love affairs and ill-fated marriages among a group of people who imagine, as we all do, that they are in control of their lives. They have intelligence, passion and culture, but all their dreams and plans miscarry, defeated by the opposition of others, by their own self-deception, or by blind accident and chance. Behind all these forces lies the presence of Egdon Heath, embodying the harsh and supreme indifference of Nature to human ambition and suffering, and the message that the book hammers home is ‘the crookedness of things’. The fatal climax comes during a great storm, and, in a note to the book, Hardy himself claims that Egdon was the very heath where the tragedy of King Lear was enacted. This statement is without the slightest foundation in fact, but it is intriguing for the high claims that it makes for the novel: it suggests that the moral and spiritual world is being turned upside down, and that the storm, the violence of nature, reflects both the disorder of men’s minds, and the malevolence of the cosmos. The parallel with Lear is far-fetched, but the novel is one of Hardy’s finest, full of character, local colour and poetry. Hardy would indeed take one incident from it – the signal sent by Wildeve to Eustacia – and turn it into the memorable poem, The Moth-Signal on Egdon Heath. Clym Yeobright is one of Hardy’s most intellectual characters, but through the blinding power of brief, transient love, he loses everything. The figure of Eustacia Vye is romantic, melodramatic and brimming with sex appeal, although Hardy of course does not say this openly. The episode of the Mummers’ Christmas Play is among the most lively and picturesque of Hardy’s rural set pieces, while Diggory Venn, the fiendish-looking reddleman, is a living reminder of the rural past that seemed so exotic to readers of the time. Through all these vivid elements and many more, the novel moves in a single relentless drive through multiple stages of love, conflict and misery towards tragedy. Where that drive comes from, and how we can ever learn to live under its power, is for Hardy the great question, linking the cosmos and the single individual in search of freedom.