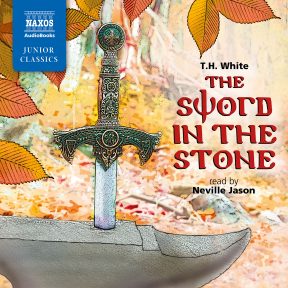 The Sword in the Stone

This abridgement of the first novel in The Once and Future King, the tale of King Arthur and the rise and fall of Camelot, is specifically aimed at 7–12 year olds. It concentrates on the early years of Arthur, leading to his proclamation as king. White elaborated imaginatively on the legend giving strong personalities to the main characters – as well as animals! Neville Jason (who read the unabridged War and Peace for Naxos AudioBooks) gives another strong reading. 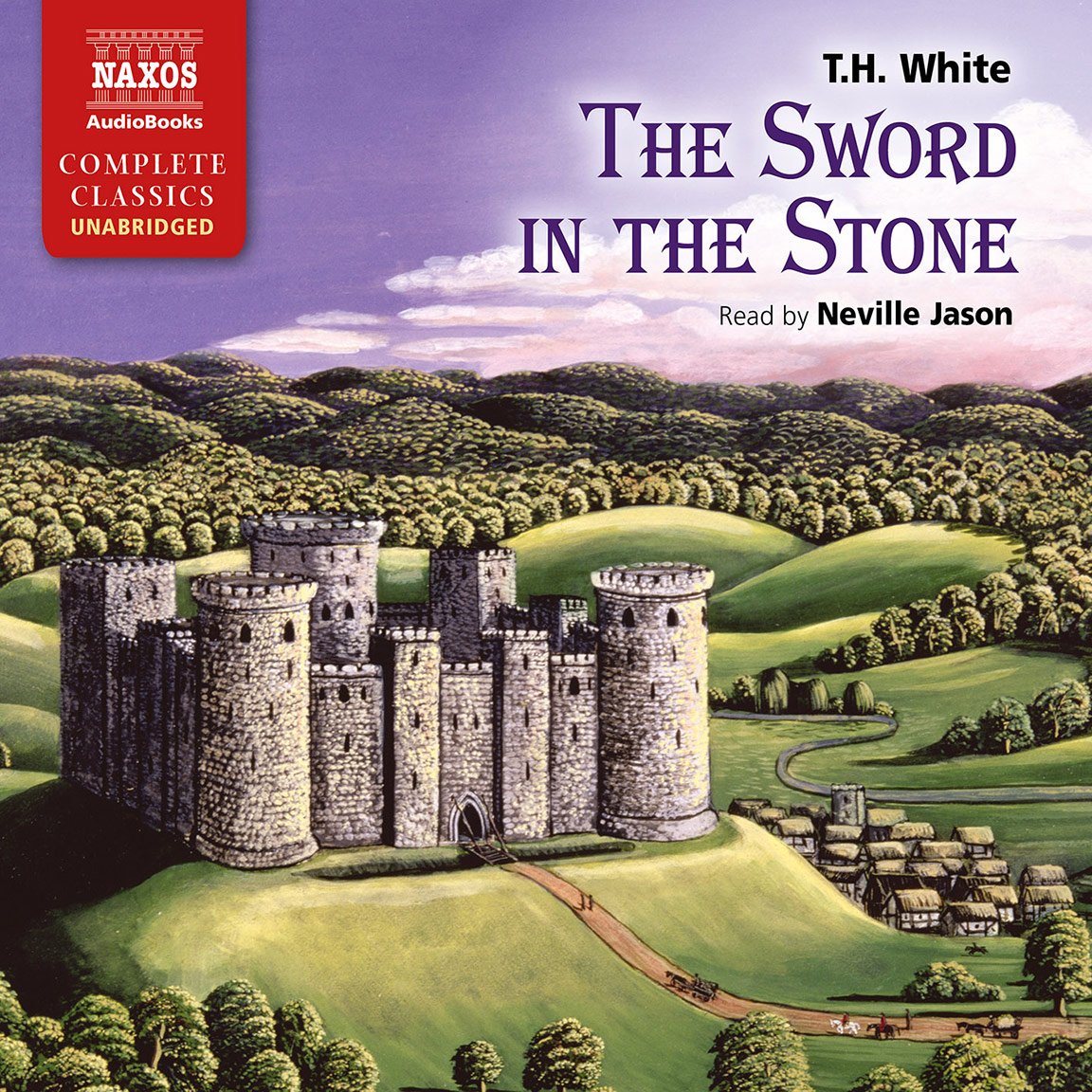 The Sword in the Stone Podcast

Neville Jason discusses his recording of The Sword in the Stone – the first part of T.H. White’s The Once and Future King.

In my audio library I keep a stock of books for anxious friends about to embark on holiday in cars full of children with low boredom thresholds. This lively retelling of the Arthurian legend allegedly saved the day for a family close to hysteria in a traffic jam en route to Cornwall, home of the legendary kingdom of Camelot. Book one of T. H. White’s junior classic The Once and Future King was published in 1939. With its slapstick humour and wizardry – forget Harry Potter, Merlin is the one – it’s probably the most accessible to modern children. White was a pacifist, and in the later books his Knights of the Round Table tend to bang on a bit about good and evil. Here, though, it’s the excitement of battles, tournaments and jousts that counts, not the morality. Of course it’s dated. Jokes about Sir Hector, young Arthur’s guardian, mumbling ‘hic, haec, hoc’ as he gets steadily tipsy will be lost on kids who’ve never done Latin. But Merlin – long white hair and beard matted with bird droppings that he occasionally wipes off with a worn-out pair of pyjama bottoms (his pet owl, Archimedes, isn’t housetrained) – is a timeless comic character. If you like this taster, Naxos does all five books.

The Arthurian Legends are England’s great epic, as full and embedded a part of the cultural heritage as the Greek myths, with the same imaginative hold as Biblical tales or Shakespeare’s plays. The stories were originally collected and written by Sir Thomas Malory, and published in 21 books in 1485. These tales of chivalrous knights undertaking brave challenges, of a noble king bringing egalitarianism, honour and decency to a land governed by brutishness and violence, have served as political and personal metaphors ever since, giving rise to countless books, poems, songs, pictures, films, musicals, television programmes, documentaries and archaeological searches. The search for Arthur’s final resting place, the possibility of his reappearance and his historical authenticity are argued with exactly the same passionate dedication by his followers as those of other faiths. Thomas Hanbury White (1906–1964) was by no means the first person to take the tales and turn them into something else; but few have had such a broad and thriving appeal. The Sword in the Stone in particular became a template for a new telling of the iconic tale, where the young Arthur finds himself king by innocently pulling Excalibur from its lodging. Walt Disney turned it into a hugely successful animated film in 1963.

Talking animals, endearing magicians, broad slapstick, jousts, feasts and splendour are all certainly in place; but it is not just fantastical children’s fiction. The Sword in the Stone is ostensibly about how Arthur became King, but most of it sees him being brought up in a rural world that owes much to White’s notions of an ideal childhood. Here, the young Arthur learns the ways of animals and the ways of nature; how to be honest and brave; and he gets the opportunity to talk to animals as one of them, thanks to the interventions of his tutor, the magician Merlyn. Merlyn is a captivating man living his life backwards, who realises he has a duty to teach his two pupils (Arthur and his foster-brother Kay) well – and one of them in particular.

Through a series of adventures that involve being turned into animals and a meeting with the real Robin Hood, Merlyn instructs his young charges in the ways of the world, and with lessons of a broader wisdom, too. But his teachings seem aimed principally at the Wart (the young Arthur), something Kay begins to resent – after all, Kay is to become a full and proper knight, and the Wart can only hope to be his squire. But there is good reason for Merlyn concentrating his efforts on the Wart, as they discover when, hearing of the King’s death, they all go to London to a grand tournament. The King had no heir, and a rightful one must be found by testing the mettle of those knights who wish to take on the role. To prove themselves, they must pull a sword from an anvil resting on a stone…

White was born in 1906 in India, and completed his education at Queen’s College, Cambridge. He had started writing while still at university, becoming a full-time author and naturalist from 1936, and much of The Sword in the Stone (which was published in 1939) reflects his several passions – the medieval period, the natural world – and his profound concerns about the approach of war. The later books in the series contemplated pacifist social theories that did away with wars altogether, seeing the ideal of Arthur’s reign as something to be aspired to. The Sword in the Stone is different, in that it concentrates on how White imagined life in a thirteenth- century castle. It is filled with descriptions of feasting, jousting, archery, hawking and hunting, and shows throughout a deep understanding of the events it describes and a sympathy for the relationship between man and animals. There is comedy – with Sir Ector’s friends King Pellinore and Sir Grummore Grummursum chasing the Questing Beast or challenging each other despite their own incompetence – and there is also genuine adventure and danger for the heroes.

But White was not just offering a reworking of the Arthurian legend. He clearly had his own deeply personal, as well as broadly social and political, issues to place in the context of a lost world of grace and humanity. What gives the book such depth, however, is not just the plot or the underlying implications of the storylines (strong as they all are); nor is it their place in epic, fantasy or Arthurian legend. It is partly the characters honest, steadfast Arthur; the outstanding Merlyn, absent-minded, humane and fallible, but always invaluably putting things into perspective; the petulant Kay; noble and generous Sir Ector; the endearingly clumsy King Pellinore; and the animals, too, who are credited with as much individual character as the people. It is partly, of course, the imaginative strength of the author, bringing such worlds as medieval tournaments, falconry, boar hunts or battlefields alive with vivid detail. It is partly, too, the unashamed brio with which White describes the food of the time, or the intimate features of the feathers of a particular bird, or the slightest aspect of hunting, heraldry or armour; or his unapologetic use of terms that were obscure when he wrote them, and have all but disappeared now. These all combine to show that White was not condescending to a childish audience, but taking every reader with him into Arthur’s more-than-mythical kingdom to see what it stood for, yearn for what it was, and for what we can still learn from it.

A Note on the Text
When T. H. White revised The Sword in the Stone, he removed certain passages and replaced them with ones from a later book called The Book of Merlyn. This Naxos version has used most of his original story, but Arthur’s first meeting with Morgan le Fay (which White introduced to replace a sequence about meeting cannibals) has been kept. This maintains some of the most memorable and endearing characters from the original book but at the same time allows a major character to make her appearance, and thus prefigure her role in the later books of the series.