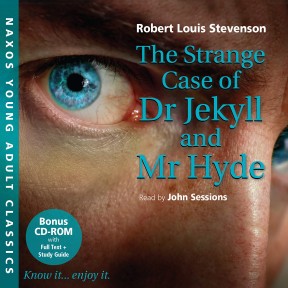 Scientist Dr Jekyll discovers a way of changing his personality and becoming the violent and aggressive Mr Hyde. At the start, moving from one to the other is easy. But not for long. Both a psychological investigation and a thrilling story, the double nature of the hero has made him an iconic figure in literature. The tempestuous nature of the tale makes it an ideal title for the Young Adult Classics series. This is part of the ‘Young Adult Classics’ series launched by Naxos AudioBooks in 2009: each title contains a CD-ROM with extensive ‘teacher notes’ and the full text of the audiobook. 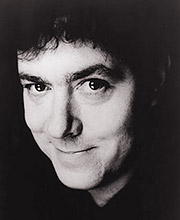 John Sessions, the highly versatile actor and comedian, is well known for his comic work in films such as My Night With Reg, In the Bleak Midwinter and The Pope Must Die, and the TV shows Whose Line Is It Anyway?, The New Statesman and Spitting Image. He also reads The Strange Case of Dr Jekyll and Mr Hyde and Pinocchio for Naxos AudioBooks.

The many films of the Jekyll and Hyde story make you overlook what a cracking good writer Stevenson was. Read with gothic gusto, this tragic tale of the intellectually

c. 1855 Illness as a child meant irregular attendance at school. Instead, his mind was nourished by reading and by composing stories.

1867Enrolled at Edinburgh University to study engineering, but studied law instead due to ill-health. He hoped this would provide him with a steady income should writing – his chosen path – fail him.

1871–3 Published articles in the Edinburgh University Magazine and The Portfolio.

1878 Travelled throughout Europe looking for a climate more suited to his delicate health.

1878 Met Fanny Vandegrift Osbourne, a married woman with two children, while in France.

1879 Followed Fanny to California, where she divorced her husband.

1880 Married Fanny Osbourne, 10 years his senior. They travelled around Europe shortly after, and lived variously in London, Bournemouth and elsewhere.

1881 Treasure Island, a romantic adventure story, was serialised in Young Folks, giving him his first fame.

1883 Treasure Island published as a novel.

1884 Continued to contribute to various periodicals, including The Cornhill Magazine and Longman’s Magazine.

1885 A Child’s Garden of Verses, devoted to Alison Cunningham, his childhood nurse, published.

1886 Kidnapped, a story about David Balfour, his distant ancestor, published.

1886 The Strange Case of Dr Jekyll and Mr Hyde published.

1888 No longer being able to tolerate a European climate, he finally abandoned Britain as his home, relocating to the Samoan islands.

1889 The Master of Ballantrae published.

1889 Wrote The Wrong Box with his stepson Lloyd Osbourne.

1893 His famous story The Beach of Falesá was published in Island Nights’ Entertainment.

1894 Died 3 December of a brain haemorrhage.