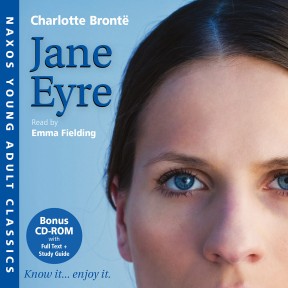 ‘Young Adult Classics’ is a new series from Naxos AudioBooks which aims to bring key works of literature to a young audience in abridged form. Lively, accessible readings with music is the key. But also important are the extra bonus CD-ROM tracks including abridged and unabridged texts, and Top Teacher’s Notes by high profile English teacher and writer Francis Gilbert. Jane Eyre is the tale of a young governess who becomes entangled with the powerful Mr Rochester, finding mystery and uneasiness in his house. This is part of the ‘Young Adult Classics’ series launched by Naxos AudioBooks in 2009: each title contains a CD-ROM with extensive ‘teacher notes’ and the full text of the audiobook.

What makes this special apart from Emma Fielding’s deft narration is the bonus CD-ROM which contains the unabridged text and a study guide by Francis Gilbert. Although the guide targets “young adults”, any intelligent reader will find it stimulating. One of a series and amazingly good value.

Time-crunched students and creative educators will welcome this abridged version of the classic novel. Fielding transports listeners into the 1800s; her tone and British accent subtly communicate the gradations of social strata, with characters distinguished by vocal modulation. Archaic sentence structure becomes the flow of natural speech, and Fielding’s pace combines with the skillful abridgement to propel listeners through the tale. Musical segues mark transitions through the use of period classical selections. The audio package includes a CD-ROM featuring the abridged and unabridged texts and a study guide. Other titles in Naxos’ Young Adult Classics series are Frankenstein, The Hound of the Baskervilles, and Pride and Prejudice.

1816 Born on 21 April in Thornton, Yorkshire, England, the third of six children.

1824 Went with three of her sisters to Lancashire boarding school, which she later used as a basis for Jane Eyre’s Lowood.

1839 Became governess to a Yorkshire family.

1842–3 Lived in Brussels with her sister Emily and taught English, an experience which provided background material for her novels The Professor and Villette.

1846 Charlotte, Emily and Anne published a collection of poetry under the pseudonyms of Currer, Ellis and Acton Bell: only two copies were sold. But the sisters were determined to continue writing.

1847 Wuthering Heights by Emily published under the name of Ellis Bell.

1847 Agnes Grey by Anne published under the name of Acton Bell.

1848 Charlotte and Anne visited their publishers and revealed their real names.

1855 Charlotte died on 31 March, with her unborn child, possibly of tuberculosis.

1857 The Professor published (written before Jane Eyre but rejected by publishers).

1857 The Life of Charlotte Brontë by Elizabeth Gaskell published.