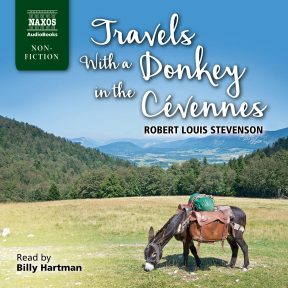 Travels with a Donkey in the Cévennes

‘We are all travelers in the “wilderness of the world” – travelers with a donkey.’ So Robert Louis Stevenson wrote to a friend on completing this enchanting account of a journey in rural France in 1878. Alone with his pack-donkey Modestine, and showing total disregard for discomfort, Stevenson relishes to the full his walking tour of the Cévennes. Freedom was the important thing: ‘I bless God that I was free to wander, free to hope, and free to love.’ This diary will find many kindred spirits. 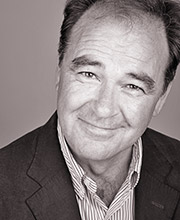 Billy Hartman trained in Edinburgh and has had a varied stage, TV and film experience. He played Elvis in the musical Elvis, Bill Sykes in Oliver!, as well as appearing in opera (including Don Giovanni) and taking roles in the central Shakespearean repertoire. His numerous film and TV credits include Highlander, Minder and Inspector Morse. He has also recorded Boswell’s A Life of Johnson for Naxos AudioBooks.

In 1878 Robert Louis Stevenson had published only one book, An Inland Voyage, the tale of a canoeing trip through France. So in that year he set off for his next foray – touring the mountainous Cévennes region in the Midi, sleeping under the stars and wandering at will. ‘I travel not to go anywhere, but to go’, he says in his opening chapter. ‘The great affair is to move’.

Like all novice travellers, he took too much with him, stuffed into a sheepskin-lined sleeping bag of his own design. To carry it he acquired Modestine, a ‘she-ass not much bigger than a dog, the colour of a mouse, with a kindly eye and a determined under-jaw [and] a faint resemblance to a lady of my acquaintance’. His 120-mile journey took him a dozen days, much of it spent cursing and goading the recalcitrant Modestine. The result is a romantic, funny classic of travel literature that Billy Hartman’s soft Edinburgh accent suits very well. It inspired John Steinbeck’s Travels With Charley, which became, to my mind, the best travel audiobook yet.

Robert Louis Stevenson was born in Edinburgh in 1850 and went to France with his parents when he was 13 years old. It was to be the rst of many visits and the beginning of a long-standing love-affair with that country.

The attention to detail vividly brings to life the quiet, every-day scenes of pastoral France

His book, Travels with a Donkey in the Cévennes was written from diaries kept whilst on a walking tour in September 1878. Missing Fanny Osbourne, an American, ten years his senior, with whom he had formed a deep attachment (she had returned to California in an attempt to sort out her personal entanglements), he decided to embark on this lone expedition through the wild countryside of the Cévennes. On the trip he kept a daily journal which he usually wrote first thing in the morning, as he said, when he was fresh, or, sometimes, in an inn at lunchtime. From the outset, he had every intention of publishing the diary. It was, in fact, published the next year in 1879, entitled The Cévennes Journal.

Travels with a Donkey in the Cévennes is a charming account of this Romantic’s walk, through the rugged countryside, in all weathers, accompanied by his obstinate donkey, Modestine. Indeed, Modestine has such a character that she has become one of literature’s famous underdog companions along with Sancho Panza and many others. It is as though in Robert Louis Stevenson’s eyes she becomes a surrogate for all life’s ills.

The attention to detail vividly brings to life the quiet, every-day scenes of pastoral France and illuminates not only Robert Louis Stevenson’s love of France but his love/hate relationship with Scotland. We see this through his constant comparisons of the scenery and the climate and through the pleasure he shows when reminded of things Scottish, as when he observes a gentle, devout community pouring out of church one Sunday morning.

Religion plays an important part in his thoughts on this walk. He is fascinated by the French Protestant rebels of the region – the Camisards – who remind him of the stories that his nanny used to tell him about the Scottish Covenanters. And he shows his underlying loyalty to the Presbyterian tradition, despite his open-mindedness, as illustrated in his description of the Trappist monastery.

Surprisingly, throughout his twelve day walk, Robert Louis Stevenson never mentions Fanny. However, we read of his appreciation of beautiful women, we share his love of sleeping under the stars and we luxuriate with him in his sense of freedom.

This short account by the author of, amongst others, Treasure Island, Kidnapped, The Strange Case of Dr Jekyll and Mr Hyde and A Child’s Garden of Verses, reveals the passionate, impulsive and yet determined and loyal side of Robert Louis Stevenson’s nature. His dedication of Travels with a Donkey to Sidney Colvin, an eminent man of letters, illustrates this:

The journey which this little book is to describe was very agreeable and fortunate for me. After an uncouth beginning, I had the best of luck to the end. But we are all travellers in what John Bunyan calls the wilderness of this world – all, too, travellers with a donkey; and the best that we find in our travels is an honest friend. He is a fortunate voyager who finds many. We travel, indeed, to nd them. They are the end and the reward of life. They keep us worthy of ourselves; and, when we are alone, we are only nearer to the absent.

Every book is, in an intimate sense, a circular letter to the friends of him who writes it. They alone take his meaning; they find private messages, assurances of love, and expressions of gratitude dropped for them in every corner. The public is but a generous patron who defrays the postage. Yet though the letter is directed to all, we have an old and kindly custom of addressing it on the outside to one. Of what shall a man be proud, if he is not proud of his friends? And so, my dear Sidney Colvin, it is with pride that I sign myself affectionately yours,