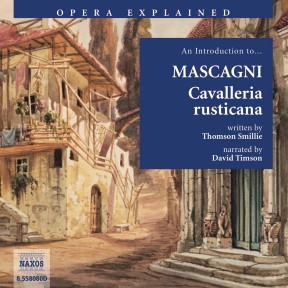 Cavalleria rusticana is the short opera that has all the elements of a grand opera compressed into a single highly dramatic time span. The story of love, lust, blood-feud and betrayal played out against the pageantry of the Easter celebrations in a Sicilian village delivers an emotional wallop because of the youthful vigour and musical wealth of its great score which includes the glorious Easter Hymn and the deeply moving Intermezzo. Mascagni was never to repeat his youthful success but this brief work is enough to ensure his immortality.

From its early origins in Italy opera spread across Europe, establishing individual and distinctive schools in a number of countries. France had an early and long- standing love affair with it – hence the term grand opéra, referring to the massive five-act creations that graced the Paris Opéra in the nineteenth century. Germany had an excellent school from as early as Mozart’s time, and opera perhaps reached its highest achievement with the mighty music dramas of Richard Wagner. Russia, Great Britain and the Americas have also made their contributions.

In the popular imagination, however, opera remains an Italian concept – and no wonder. From its earliest years Italians dominated the art: Cavalli and Monteverdi were among the first to establish its forms; there was a golden age, called the bel canto, at the beginning of the nineteenth century when Bellini, Donizetti and Rossini ruled supreme; Giuseppe Verdi was probably the most revered artist in history; and, for many, Puccini represents in every sense the last word in this beloved genre.

It is deeply appropriate that the apotheosis of the great film trilogy The Godfather should take place against the backdrop of a performance of Mascagni’s youthful masterpiece Cavalleria rusticana. The movie and the opera both distill that power, passion and blood-lust – combined with a deeply held sense of honour and chivalry, the ‘Country Code of Honour’ of the opera’s title – which characterise Sicilian life.

Cavalleria rusticana was written for a competition, and while it was seen at the time as promising a glorious future for both opera and the work’s gifted young composer, this proved to be a mirage on both counts. The style of opera that it represents so triumphantly is called the verismo – meaning ‘true-to-life’. Far from being a new dawn for opera it turned out to be a swansong, with Puccini’s later Turandot the last word on a tradition which lasted from the late 1500s into the early twentieth century.

Ever since audiences cheered Cavalleria rusticana on its first outing in 1890 it has been an operatic staple – and no wonder. It is freely adapted from a bodice- ripper of a short story, and its wonderful setting in rural Sicily offers opportunities for that combination of sin and sanctity that the Italians do so well. It also has a score of immense power and beauty. It is this last factor – the melodic wealth of Cavalleria rusticana – more than anything else that guarantees its lasting popularity. Several great arias and even greater choruses run through a score that is also characterised by impressive and original orchestral writing. Indeed, the two best-loved numbers are a chorus with solo overlays and a pure orchestral piece: the overwhelming Easter Hymn and the gentler but equally moving Intermezzo.

The story is the eternal one of love and jealousy. Turiddu (the tenor, of course) had once loved Lola, who is now married to Alfio. Then he loved Santuzza, but has dropped her and now wants Lola back. Santuzza is therefore a scorned woman whose fury, as the Bard might have said, surpasses that of Hell. When Santuzza realises that she has lost Turiddu to Lola she tells all to Lola’s husband Alfio, who has no choice under the rustic code of chivalry but to challenge Turiddu to a duel – with predictably fatal consequences. What makes all this such superb musical theatre is the combination of raw passion, melodic invention of extraordinary youthful vigour, and the device of playing out these animal instincts of lust, jealousy and revenge against the sacred pageantry of a small Sicilian village’s Easter celebrations.

Cavalleria rusticana shares a poignant characteristic with Leoncavallo’s Pagliacci – with which it is often paired in the theatre – in that it promised a glittering career for its young composer that never materialised. Although Mascagni lived on into World War Two he never repeated this triumph. His longevity, however, at least allowed him to make his own recording of the opera, extracts from which are included in this introduction to form an extraordinary link between our times and the long-vanished world of nineteenth-century Italian opera at its final glorious peak.

Before the curtain rises, Turiddu can be heard singing a love song to Lola, the girl he loves and promised to marry before he left for his military service. When he returned, he found that she had married the carter, Alfio. He turned to another girl, Santuzza, promising to marry her, but has begun to see Lola again.

When the curtain rises, it is early on Easter morning and villagers comment on the beautiful day on their way to church. Santuzza approaches Turiddu’s mother, Mamma Lucia, asking for news of her son. Santuzza is told that he has gone to the next village to fetch some wine, but this is not true: he was seen in the village by Santuzza herself the previous evening, and Alfio, who enters at this point, tells them that he saw Turiddu in the village that morning.

When Alfio leaves, Santuzza explains to Mamma Lucia that Turiddu has betrayed her and gone back to Lola. Worried by what she has heard, Mamma Lucia carries on to the church. Turiddu then arrives and angrily refuses to answer Santuzza’s questions. Their confrontation is interrupted by Lola’s arrival, and as she flirts with Turiddu she arouses Santuzza’s jealousy. Santuzza pleas with Turiddu but he pushes her violently away. In her despair she then reveals his infidelity to Alfio, who swears that he will be avenged. Santuzza realises too late what she has started, and they both leave the village square.

Here, the famous Intermezzo is played, while the stage is empty. Men and women then come out of the church, and Turiddu invites people to come and drink with him. Alfio declines and makes his challenge, to which Turiddu responds by biting Alfio’s ear – a Sicilian gesture to show that he accepts. Turiddu bids farewell to his mother, asking her to care for Santuzza should he not return alive. Mamma Lucia is left bewildered as her son rushes out. Santuzza comes to keep her company. There is a cry heard off-stage: ‘They have murdered Turiddu’ . Santuzza collapses.

Dear listeners, I am Pietro Mascagni and I am talking to you to tell you that my Cavalleria rusticana is now fifty years old and is bound up in my memory with so many expressions of affection that I have not been able to resist the invitation of the distinguished company His Master’s Voice and have decided to present a recording of my opera in its complete version conducted for the first time by myself. My creation, which is brought to life by the most celebrated singers and by orchestral and choral forces that are unrivalled throughout the world, will in this way provide a far better image of me than any signed portrait. And I, who have signed so many autographs, have never provided one more gladly, because more than any other it is one that lives and truly represents me as both composer and conductor of my music. I salute you cordially, before raising my baton.