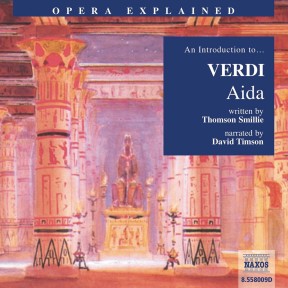 Ancient Egypt and the war with Ethiopia is the setting for Verdi’s grandest opera. It is the story of the love between Rhadames, the Egyptian general and Aida, an Ethiopian slave, and the jealousy of Amneris, daughter of the King of Egypt. It was written in 1871 to a commission from the Khedive of Egypt to inaugurate the new opera house in Cairo. Aida generally is considered one of the most spectacular of Verdi’s operas. But Thomson Smillie, in his fascinating introduction to the work, presented by actor David Timson, says it is, more accurately ‘a chamber opera with a grand march through the middle of it’. The historic background – how and why it came to be composed – is clearly explained. This is followed by the plot, the characters, and the principal arias and musical moments – a perfect way of getting to know the work.

Opera – the word means ‘the works’ – is a synthesis of all the other arts: drama, vocal and orchestral music, dance, light, design; consequently, when it works it delivers an emotional impact none of the other arts can match. The only one of the arts whose origins can be precisely dated, it was ‘invented’ in Italy in 1597 as part of the Renaissance – the re-birth of interest in classical values. The name is Latin but the art form is truly international and crosses all linguistic and cultural barriers. It is probably the one art form whose audience continues to expand, not in spite of, but because of developments in entertainment technology.

From its early origins in Italy, opera spread across Europe establishing individual and distinctive schools in a number of countries. France had an early and long-standing love affair with the art – indeed the term grand opera is French and refers to the massive five-act creations which graced the Paris Opera in the nineteenth century. Germany had a marvellous school from as early as Mozart and the art form perhaps reached its highest achievement with the mighty music dramas of Richard Wagner. Russia, Great Britain and the Americas have made their contributions.

But in the popular imagination opera remains an Italian concept – and no wonder. From its earliest years Italians dominated the art: Monteverdi and Cavalli were early to establish its forms; there was a golden age, called the bel canto at the beginning of the nineteenth century when Rossini, Bellini and Donizetti ruled supreme; Giuseppe Verdi was probably the most revered artist in history and, for many, Puccini represented, in every sense, the last word in a beloved art form.

If the twentieth century has not been as lavishly endowed with opera composers, it can still boast Richard Strauss, Benjamin Britten, Stravinsky and dozens more – and maybe, in the long run most significantly, those errant step- children of opera, the Broadway musical and the Lloyd Webber spectacular.

Aida occupies a very special place in operatic lore. The fact that it is surrounded by misunderstandings, mis-apprehensions and mis-told anecdotes only attests to its legendary status. The popular myth that it was commissioned to mark the opening of the Suez Canal is one. It was commissioned for the opening of the Cairo Opera House and the Khedive of Egypt wanted the world’s most famous and successful composer to be part of those celebrations, having failed to coax a new opera out of him for the Canal opening. A popular mis-apprehension of those attending Aida for the first time is that it is basically a circus, featuring spectacular scenes, great tunes, camels, horses, slaves – even some zoologically inappropriate elephants. The view of the academic is that it is one of the subtler and finer human dramas by the greatest of all Italian music-dramatists at the height of his majestic powers.

And the fact of course is that it is both. It has moments of great spectacle, but it is basically that great theatrical stand-by, the Eternal Triangle. Aida is a slave girl loved by an Egyptian general who is in turn loved by the King’s daughter. So to the usual mix are added class, race and political clashes. And because of the eminence of the participants (Aida, as we shall discover, is no everyday slave girl), the drama of their lives is played out against the huge backdrop of a mighty nation at war.

And Verdi was the composer who, over a career that spanned more than half the nineteenth century, provided the Italians with the supreme examples of their favourite art form. Verdi responded with a superb score which captures all the passions of the young lovers, their terrors amid the jealous fits of the thwarted princess, all the sultry heat of Africa and the noises of its night and, where required, the barbarism and splendour of the Age of the Pharaohs.

How thrilling it is to experience a work which brings forth the highest acclaim from the most sophisticated musicologist, yet which can still delight the child in all of us.