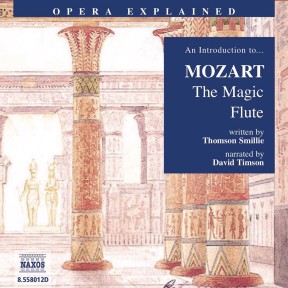 The Magic Flute almost defines a masterpiece, because it can be enjoyed on every level. It is a superb fairy story, complete with dragons, demons, a handsome prince, and a lovely maiden seriously in need of rescue; it is a political satire, social commentary, and psychological drama; it is full of tunes from the playful to the heart-stopping, jolly songs, and deeply spiritual outpourings. It is, in short, ‘Mozart’ – and there is no greater compliment than that. This disc gives us a wonderful insight into possibly the most remarkable work ever written for the stage. Beginning with an enticing overview of Mozart’s astonishing output, David Timson then takes us through The Magic Flute with infectious pleasure at every turn of genius. From the delightfully comic Papageno ‘rudely trying to sing with his mouth full of padlock’ to The Queen of the Night’s Vengeance aria, we enjoy the full spectrum of dramatic situations.

But in the popular imagination opera remains an Italian concept – and no wonder. From its earliest years Italians dominated the art: Cavalli and Monteverdi were among the first to establish its forms; there was a golden age, called the bel canto, at the beginning of the nineteenth century when Bellini, Donizetti, and rossini ruled supreme; Giuseppe Verdi was probably the most revered artist in history; and, for many, Puccini represents in every sense the last word in this beloved genre.

Somebody once said that ‘all art aspires to the condition of music’, to which we might add, ‘and all music aspires to the condition of Mozart’. The child-wonder, the ‘guttersnipe who was the voice of God’, intrigued and enchanted scholars and laymen years before Peter Schaffer’s play Amadeus and its subsequent Oscar-winning screen version made Mozart an even more familiar icon.

He was the child prodigy, prodded, coaxed, and exploited by his father Leopold to demonstrate his abnormal talent throughout the courts of pre- revolutionary Europe. He composed forty-one symphonies, twenty-seven piano concertos, and a massive body of chamber music. He was perhaps the only figure in all the history of music that was equally at home in the concert hall, in the chamber-music salon, in the sacred surroundings of the great cathedrals, and in the theatre.

Indeed you could argue that one of the problems of opera is that with The Marriage of Figaro, Così fan tutte, Don Giovanni, and The Magic Flute it attained a peak – and never got any better! Different, but no better.

The gruesome, chocolate-box image of little Mozart staring like a pre- pubescent Liberace from his harpsichord, though a mainstay of the Austrian tourist industry, has now been exploded. We can now think of him as a sensual, intensely human figure, endowed with an awesome mixture of carnal and cerebral qualities. And nowhere does this intriguing combination find better expression than in his last undisputed masterpiece The Magic Flute. This is probably the most remarkable musical work ever written for the stage. Its genesis lies with a comedian/actor/manager called Schikaneder, who operated a low music hall in the suburbs of Vienna in the 1790s. He cobbled together, from a variety of fables and fairy tales, this story of the young Prince Tamino and his pursuit of the pure Pamina. The quest, conducted against the background of a spiritual war between the glittering Queen of the Night and the dull but noble Sarastro, is enlivened by a wonderful galaxy of characters: the very human bird-man Papageno, the wicked, lustful Monostatos, and assorted magic ladies and piping boys. What is so intriguing – and no doubt assures The Magic Flute’s place as the National Opera of the German-Speaking Peoples – is that the work appeals at every intellectual level. For the child introduced to opera for the first time it is the greatest of all pantomimes. For the sensualist it contains music of ravishing beauty. For the moralist it confirms a belief in the inevitable triumph of light over dark.

And for the true opera lover it is maybe none, or maybe all, of these things. It is simply one of the most sublime and life-enhancing works ever written, and the final and supreme testament of the boy-wonder, the mature genius, the randy tyke, who, when he put pen to manuscript paper, poured out music of such spiritual depth and beauty that you can weep just to think of it. To know The Magic Flute is to learn that maybe there is something beyond this mortal coil.