Each year, browsing through the events for the large and small literary festivals around the country, I am always surprised how few audiobook programmes feature. After all, the audiobook medium is a growing part of the book world, delivering literature (high and low) in an accessible, modern and exciting format so it should have a regular place at all festivals. 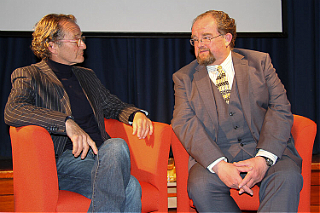 Even more salient is the fact that we in audiobooks know about performance – which I am afraid is not something that is often evident in many festival programmes. Writers and poets read their own works, participate in interviews and engage in learned discussions. This is certainly useful, for it puts the authors into direct contact with their readers, which is intriguing and, hopefully, beneficial for both.

BUT – the performance level is often, to tell the truth, very low. This is scarcely surprising because writers are generally very solitary creatures, happiest behind a typewriter (‘a what??’), and they wilt when in the glare of the spotlight. Of course, in these savvy days of spin and social media, many can do a passable impersonation of politicians addressing their constituents. But on the whole, it is not a magic event.

Earlier this month, Anton Lesser and David Timson had a spot at the Chipping Campden Literature Festival. The theme was The War Poetry of Wilfred Owen – David programmed our recent 1 CD set, which Anton read, marking the start of WWI.

Chipping Campden is a small but genial and endearing literary festival set in an attractive, essential English Cotswold town. The festival is five years old and growing, like its more established popular classical music festival also this month. Just last year, Neville Jason gave a Proust talk with readings which held the audience entranced – he went on to further the cause of Proust at the Cheltenham Festival. And Vicky Bennett, who runs Chipping Campden, invited us back with the WWI theme.

David introduced the programme, discussing some aspects of Owen’s poetry – his use of the half rhyme and of course his experiences before and during the war; he then read passages from Owen’s poetry and letters to his mother (an important source of information). 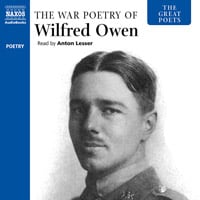 And Anton, just in a break from filming – he seems to be seen constantly on TV, most recently in Endeavour – read some of the great poems, including Strange Meeting.

The audience sat absolutely still. ‘War and the pity of war’ as Owen described the content of his poetry, is an emotive subject, but, presented by these two outstanding readers, it proved deeply affecting. For nearly an hour there wasn’t a sound or movement from the audience. I don’t think I saw anyone lift a glass of wine from the tables in front of them. It would have seemed a sacrilege.

Here, live, was the power of the audiobook. Literature plus performance. I suppose I am mainly speaking to the converted on this website. We know how entertaining, moving, informative and diverting audiobooks can be as we drive in our cars, travel on trains, run in the gym, walk in the countryside. Well, as the audience at the Chipping Campden Literature Festival discovered, when you have Anton Lesser and David Timson presenting Wilfred Owen live in front of you, the effect is double!

If you go to our Ulysses page, you can hear a recording of Roger Marsh’s presentation on Joyce’s Women at the Oxford Literary Festival a few years ago.

Well, come on Hay, Edinburgh and Oxford. This isn–t just a plug for Naxos AudioBooks – but for the medium of the Spoken Word. We KNOW how to perform and stun an audience. That is your benefit. From our side, we hope it will bring an ever-widening group to enjoy top readers performing to you personally at your behest.