‘The show must go on!’
‘We never close!’
‘If there is one more person in the audience than the cast – we play!’

These are the axioms by which their lives are ruled.

At the same time, they must be both sensitive and have the star quality to beam their personality across the footlights; they must be resilient, dependable, able to act when disasters happen on stage or off stage; they must be able to improvise, to take on board criticism, failure, and success; they must regularly disregard illness, personal tragedy, and simple, root tiredness from eight shows a week – and still walk on sparkling with enthusiasm. They must be both comic and tragedian, sprinter and marathon runner, soloist and company player.

Frankly, I don’t know how they do it.

The audiobook studio is very different. They come in, sit down, place their script (or now their iPad) on the table, do a sound check for the engineer, and in an environment of silence and solitude, bring a Dickens or George Eliot cast to life. On their own. For hour after hour.

Most of our sessions are full-day sessions because we do long classic novels. This means that the actor starts at 9.30 a.m. or 10 a.m., has a 10 minute mid-morning break (when often they are on their mobiles responding to messages from agents or dealing with domestic issues), and lunch at 1 p.m. At 2 p.m. (or even earlier) they are back at the microphone. Rodolphe is taking Emma Bovary down a country path, her hapless husband is hoping she will enjoy the horse ride while he looks after his rural practice, and a fraught future for all beckons. 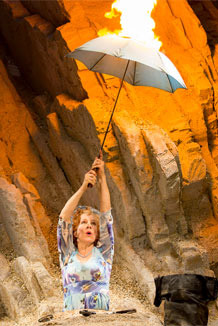 Juliet Stevenson in Happy Days at the Young Vic

Emotions are beginning to rise, both in the story and in the studio, where Juliet Stevenson is bringing Flaubert to life with a sympathy and a commitment that has made her one of the most outstanding readers of the classics. Her recording of Middlemarch instantly became one of Naxos AudioBooks’s best-sellers – but then all her recordings of authors from Jane Austen and Virginia Woolf to Doris Lessing have a strong and faithful following.

This month we offer two new works from her: Woolf’s early novel Night and Day, and the iconic novel of French womanhood, Madame Bovary.

Though Ms Stevenson has recorded many works for us, Madame Bovary was rather special. She immediately said yes when I offered it to her. It was a favourite novel of hers, she said. But there was a problem. She was about to start rehearsing for Samuel Beckett’s Happy Days at the Young Vic in London, and couldn’t do it until she was well into the run. After all, the role of Winnie is one of the most challenging of all modern female parts.

So, we agreed to wait until she was ready though there is a film in the offing without a clear release date. (It could be anytime in 2014.)

In February, Juliet opened with Happy Days. I went to the first preview – which is still part of the rehearsal process – but it was clear that here was something exceptional. There was a standing ovation at the end – very rare for a first preview. The characterisation of Winnie was deeply moving and unforgettable. Two months on and I still feel its power.

It is also hugely demanding physically. Juliet is on stage, effectively by herself, for nigh on two hours. She is buried up to her waist for the first half and then up to her chin for the second half, but in reality she was standing up the whole time. The spotlight was on her undiminished for the whole time; it is a physical and emotional tour de force.

But what the audience didn’t know was that halfway through the run, when she felt she had Winnie really under her belt, she started to come into the studio to read Madame Bovary. It is almost unbelievable. At 9.30am every morning, she would be at the microphone, with her iPad, her profound feeling for Flaubert and the situation of Emma Bovary (and her perfect French accent) and launch into the next chapter.

It was almost unbelievable. Emma and Winnie are two totally different characters, except that they are both massively demanding emotionally. Flaubert’s cool writing doesn’t lessen the constant turmoil of feelings, intentions and tensions underneath. Juliet launched into the book with the same total commitment that she was to display on stage in the evening.

She did do shortish days in the studio. At 3.30 p.m. she would leave to drive down to the theatre and, I hope, would manage to put her head down for an hour before the play began.

Having heard her Madame Bovary, I exhort you to listen. You will find no finer performance of it. Having seen Happy Days, I exhort you to book when it returns to the Young Vic in February 2015. You will have the experience of one of our greatest actors at the peak of her powers.

You will never forget either of the works, or her.