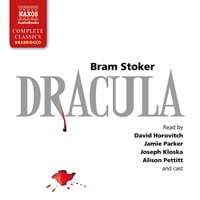 There are few fictional characters that have found their way into popular culture as deeply as Count Dracula. In recent years we have seen a plethora of vampire-based books and films, the most commercially successful being the Twilight series. However, the novel Dracula goes back as far as 1897 and was not itself the first vampire novel as it had antecedents in works by Sheridan le Fanu amongst others.

We are so accustomed to seeing Dracula (both the character and the stories and their sometimes far-fetched variations) in some of the more than 200 films created to date that this cannot but colour our perspective… whether it is F.W. Murnau’s seminal 1922 Nosferatu (plot and character names changed to, unsuccessfully as it turned out, bypass copyright laws), Bela Lugosi, or Christopher Lee’s Count of the Hammer Horror movies. The customary accoutrements of garlic, wooden stakes and crucifixes, which are memorable features of the cinematic versions, all have their beginnings in Bram Stoker’s original novel.

Many commentators have perceived a sexual (and arguably sexist) subtext to the Dracula story and this aspect seems to be quite obvious throughout the novel. There is a clear carnal undertone in the stalking of a female victim with a view to taking possession of her and drinking her blood. Mina and Lucy Westenra, who is targeted initially, represent a model of Victorian feminine virtue threatened by the satanic Dracula. Set against this ideal is the voluptuousness and overt sexuality of the female vampires – most notably the three creatures that Jonathan Harker encounters in Dracula’s castle. In this world it is men who are bound to protect the virtue of the innocent maid, and men who attempt to save the women who have come under Dracula’s power.

We sought to render the original text as written

So how did we approach our audiobook version? The first principle, in usual Naxos fashion, was to remain true to the book. Thus we made no attempt to create a dramatisation, but sought to render the original text as written. Stoker’s novel is fundamentally in epistolary form – consisting of letters, diary entries and the like, from the perspectives of different characters. In the same vein as works by authors such as Wilkie Collins, this multi-voiced narrative lends itself splendidly to the spoken-word medium even though it does present logistical challenges for the audiobook producer. Our normal level of judgement had to be exercised in order to find the right actor for each character – both in the sense of the individual voice, but also to create a coherent and compelling whole. For example, David Horovitch took the part of the vampire-hunter Van Helsing, bringing to the role a professorial quality; Jamie Parker imbued Jonathan Harker with a freshness that quickly turns to despair as the story unfolds; while Alison Pettit’s Mina betrays an innocence befitting the object of Dracula’s blood lust.

Dracula is full of quotable lines. Amongst the most memorable is Van Helsing’s ‘We learn from failure, not from success’. We leave the listener to decide whether the new Naxos audiobook of Dracula qualifies as a success, but do urge you to go back to the original novel and give it a listen.