One can’t really imagine the effect Finnegans Wake had when it was first published 70 years ago – on 4 May, 1939. It had taken Joyce 17 years to write, starting after he took a break following the publication of Ulysses. It had a similar effect on the literary public as Stravinsky’s The Rite of Spring had three decades earlier – sharply divided responses. Some writers and critics thought it was a masterpiece, while others were furious. Most were simply baffled, and so it has remained.

This is why I felt it was important that our Joyce team of the actors Jim Norton and Marcella Riordan, and composer/director/Joyce expert Roger Marsh, who all served Ulysses so well, should tackle Finnegans Wake.

Of course, this was a task of a very different order, as anyone who has read even the opening page will understand.

But, Roger took time off from composing and produced a 4 CD abridgement, and Jim and Marcella set about working on the text. This was back in 1998, and the problem was that Jim was in the middle of his world tour starring in Conor McPherson’s The Weir. He had time during the day, but was in the theatre at night… and the production was moving from London to New York to Dublin to Australia and elsewhere. 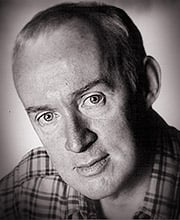 Finally, we decided to record where it should be recorded, in Dublin itself. Jim didn’t think it would be a problem to spend the day in the studio and the night on the stage of the famous Gate Theatre giving one of the finest performances of his long and distinguished career. He is a bit remarkable in that way.

So, I organised a studio on someone’s recommendation… Roger and I flew to Dublin (Marcella was to record the Anna Livia Plurabelle sections later) and, on Monday morning, we started. I remember it as clear as day. We arrived in the studio, all rather daunted by the task that lay before us – but we had no idea what that meant!

We arrived to find the ‘recommended’ studio was in a building with a dance school. Modern dance and ballet. It was a ballet day. Lithe bodies were milling around, honky tonk pianos were thumping out rhythms and there was the thump thump of many feet.

‘Hmmn,’ I thought, ‘that studio had better have some spectacular sound proofing…’

Well, it didn’t. ‘Oh, it would be fine,’ the engineer assured us, thinking of the four-day booking.

riverrun, past Eve and Adam’s, from swerve of shore to bend of bay, brings us by a commodius vicus of recirculation back to Howth Castle and Environs.
Sir Tristram, violer d’amores, fr’over the short sea, had passen-core rearrived from North Armorica on this side the scraggy isthmus of Europe Minor to wielderfight his penisolate war: nor had topsawyer’s rocks by the stream Oconee exaggerated themselse to Laurens County’s gorgios while they went doublin their mumper all the time: nor avoice from afire bellowsed mishe mishe to tauftauf thuartpeatrick not yet, though venissoon after, had a kidscad buttended a bland old isaac: not yet, though all’s fair in vanessy, were sosie sesthers wroth with twone nathandjoe. Rot a peck of pa’s malt had Jhem or Shen brewed by arclight and rory end to the regginbrow was to be seen ringsome on the aquaface.

Thump thump thump. Joyce would have loved it. No he wouldn’t. Yes he would…

After ten minutes, I made an executive decision, and by minute twelve we were out of there, walking to a coffee house to regroup. For decades, Jim has recorded radio plays, voiceovers, books and more in Dublin and he knows most studios. Between us, we found an empty studio, an engineer, and had decamped to Totally Wired at Lime Street Sound, just by the Liffey. Within an hour, Jim was seated on a stool, one leg on the floor, one leg hooked on a crossbar with his thick script on the lectern, looking through the glass to the control room where Roger had, in front of him, Page 1.

And so off they went again

riverrun, past Eve and Adam’s, from swerve of shore to bend of bay, brings us by a commodius vicus of recirculation back to Howth Castle and Environs.

There was nothing to be heard apart from Jim reading his way through this magical, mysterious, confusing, funny, odd script. Singsong with Irish lilt laced with languages and references from the world over, a few of which you understood strangely, or thought that you did.

And so it went for four days. The engineer was totally bemused, people in the studio would wander past the plate glass and just gape in awe as Jim read with understanding mingled with incomprehension but always with aplomb.

‘Ah, Roger, what was this all about? I can’t remember…’

‘Well, Shem the Penman is….’ and off Roger would go, clarifying to the point, and occasionally slipping in some of the underlying Hungarian or Sanskrit references that may or may not have been really germane to pronunciation but would help Jim colour the sense and the meaning.

‘The thing is,’ Jim admitted cheerfully, ‘I prepare the night before, but sometimes it slips my mind…’

As well it might. Jim read from 9.30 a.m. to 5.30 p.m. – office hours. Then he would slide off the stool, walk out and amble up the road, crossing the Liffey and on to the Gate Theatre for a short rest before an evening of The Weir. Unbelievable.

Then he would sign autographs, go home – he was staying with his sister within sight of Joyce’s Martello Tower – and study for the next day’s recording. And so on. Unbelievable.

A few times, less than a handful over the four days, Jim would ask a question about meaning and Roger would say: ‘Nobody knows. Joyce was asked this and he admitted that he had forgotten. Just read it.’ And Jim did. And it sounded great.

And so the bulk of Finnegans Wake was recorded. 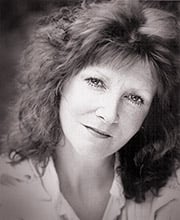 But there was still Marcella Riordan’s Anna Livia Plurabelle to do. And this was just as remarkable. Roger is Professor of Music at York University, one of the key music departments for contemporary music. It has a good studio – our unabridged Ulysses was recorded there. So Marcella went to  York, arriving early.

No one who has heard her remarkable performance of Molly’s soliloquy which closes Ulysses will be surprised, but she prepares thoroughly and arrives with a total performance in her. Of course, maybe more than in any other text, there is no one view of ALP in FW because the meaning is so variable. Would her view differ from Roger’s director’s view?

He reported that listening to Marcella read ALP was, really, the clear brook winding its way over the stones downwards to the sea. It was music. He sat and listened and marvelled.

And when she had finished, she hugged him, as she does, and caught the train back to London.

Then Roger’s writing work began. Finnegans Wake is a wonder, he says, and not that difficult. (Yeah!) People need just a bit of guidance, a little map of directions.

• He wrote helpful notes to give an overview
• For every index point on the CDs, he wrote a little explanation of what is happening.
• He made sure that in the booklet was the abridged script so that listeners could follow the words on the page (some of the jokes and references are visual).

And then it was finished.

All this happened in 1998, but we decided to mark the 70th anniversary of the first publication of one of the giants of world literature by reissuing it with a new cover and package, but with all the elements as pristine as ever.

There have been some milestone recordings for me as Naxos AudioBooks has expanded… and this is certainly one of them. If you have ever thought you want to try to get to grips with Finnegans Wake, but have been daunted by the apparent difficulties, I suggest you buy this set. Then settle down at home, with the booklet in front of you; perhaps read the main essay beforehand for the background; and then put CD 1 into the player, (or click on the iPod – the notes are all there in a PDF file) and start on page 1.

riverrun, past Eve and Adam’s, from swerve of shore to bend of bay, brings us by a commodius vicus of recirculation back to Howth Castle and Environs.

You are in for a treat.

AND – this is also true about our new recording of The Master and Margarita by Mikhail Bulgakov. This delightfully engaging, quirky twentieth century Russian classic is read with grand humour and character by Julian Rhind-Tutt in a fine new translation by Michael Karpelson. We are offering this as a 7 CD abridgement this month, with an unabridged version coming on 13 CDs in November. Caroline Waight was executive producer for the project and deserves the credit for making it happen, while Roy McMillan, a regular and creative member of the Naxos AudioBooks team steered the recording into life.

May is truly an embarras de richesse for twentieth century masterpieces on audio!