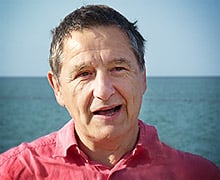 Well, I do. And, curiously, it is holiday time when they really come into their own. Especially in travel time.

I was off to the Rossini Festival in the composer’s birthplace, Pesaro, right on the Adriatic, with its incredibly sweet 1818 opera house. Three Rossini operas: La Cenerentola, Sigismondo (which were great!) and his first opera, Demetrio e Polibio, which fell into the ‘interesting’ category. Opera filled the evening, sure, but there was ample time for books by the pool and in the car (my wife and I drove – our own real version of Il Viaggio a Reims), so it was time to get organised. I had new texts to read (coming next year are more ‘In a Nutshells’ and some excellent non-fiction audiobooks for younger listeners), abridgements to check and audio to listen to, aside from brushing up on my Rossini!

Into the suitcase went my Version 1 Kindle loaded with texts, some of which were also on my iPhone for late night reading so I wouldn’t disturb the wife. My iPhone also contained all my listening: audiobooks in the Books section and music in the playlist section. I had two pairs of headphones, including one over-the-ears, which deputise when the in-ear kind are giving my cauliflower ears (courtesy of years of judo) too much grief.

We went in my wife’s Saab convertible, which was great for cruising past Lake Como with the roof down)… except that it is not kitted out for iPhone links. So, rather bizarrely, there was my wife sitting with her MP3 player pumping Bulldog Drummond into her ears and my MP3 player pumping Don Quixote (both, by coincidence, read by Roy McMillan… what versatility) into one ear, leaving my other ear to listen for traffic issues and to The Lady of the Sat Nav.

The bottom line is that, alas, we all have to step up to the plate, gadget-speaking. There is no getting away from it.

Not an ideal way to maintain lively conversation and relations, but we did have an occasional time-out to catch up with where (respectively) we were.

That is the truth. Because, like most people (probably) we find it a bit draining keeping up with technical developments. I must admit that generally when I hit the airports I pick up a copy of Wired magazine… but when I did it at one point in this journey, the main article was about Stress. Quite. It may have concentrated on stress in baboons (or were they gibbons?) but stress is stress. Halfway through Bulldog Drummond, my wife (Sarah) pressed shuffle by mistake and, phew, that took some sorting out. Bulldog Drummond was escaping before he had even been tied up.

Every night we had not only to brush our teeth but check that all our machines were topping up and would be ready for the next day. Although we thought we had come equipped with sufficient plugs, adaptors and USB connectors, we were one short and had to jiggle.

Now, all this would have been child’s play for our intrepid webmaster, who maintains this site and ensures that when you download something it does what it should do. What’s more, he is currently developing an eBook range for Naxos (and, crikey Moses, that is complicated), ensuring that they work in EPUB, Adobe Editions and Mobipocket, on a variety of players which slip in a blank page here or a wild character there if he takes his eye off the ball.

The bottom line is that, alas, we all have to step up to the plate, gadget-speaking. There is no getting away from it. If books and performance are two of the key things in my life, I have to keep up. That means I should have got the MP3 stuff wired into Sarah’s car before we left, I should have changed my Version 1 Kindle for another eBook reader that would be more easily compatible with manuscripts (i.e. keep italics and formatting), and I should have sorted how to get Sarah’s PC iTunes to put her Bulldog Drummond into the ‘Books’ section and not have to resort to the ‘playlist’ section where shuffle was only a finger-brush away.

And I shouldn’t have lost my neat little earphones with the toggle on the wire, forcing me to revert to my over-the-ears, basic ones… and I haven’t even begun to tell you about the problems getting a 450 MB recording down (which I had to listen to urgently) from London while sitting in a busy internet café next to a kebab shop in the back streets of Senigallia, while my wife, sister and her husband were waiting to set off for Pesaro to see Sigismondo.

All this is nothing, of course, to what Rossini expected of his coloratura sopranos, or those high tenor parts. He really put their epiglottises through hoops! With a quill pen, some ink, and a remarkably fluent imagination, he poured out bouncy numbers while presumably licking a fragola gelato from across the square (the gelateria is still there). He didn’t have bytes to worry him, or wires, or Wi-Fi or no Wi-Fi. It all happened in real time, which was carriage time or 3/4.

Of course, he was generally late with his overtures, so he just stressed out everyone else.

The difference, I suppose, is that we are stressing ourselves. No different from gibbons, Wired tells me.