In our current turbulent times it is tempting to reflect on the nature of the relationship between people and their political leaders. Underpinning that, whether in a democracy or another form of government, there is an implied understanding and acceptance of how things work. Though, from time to time (and many would argue that this is one such moment), this status quo is challenged. Ideas on this go back pretty much as far as mankind itself, but the consistent theme in the history of political philosophy is that it is the role of leaders to enhance the lives of their citizens (which means their citizens as a whole, not each individual – i.e. the greater good). This brings into question issues concerning the rights of the individual versus those of the state, but also the nature of political liberty and social justice and, of course, the just and lawful exercise of power.

Plato’s Republic makes the case for government by a highly educated but unaccountable elite – not a democracy, but nevertheless embodying a strong principle of high-minded ideal. His ideal state would be governed by a philosopher-king or statesman, incorruptible and not beholden to the populace. This idea later gave rise to allegations of totalitarianism, with Popper in particular citing Plato as an enemy of an open society. However, Plato’s utopia would promote a good life of social harmony for its citizens and, in the absence of a philosopher-king then the legislature would become highly important. The balance and interplay between the legislature and the executive is one that still pervades political thought today.

For Aristotle the rule of law was the primary principle of government, overriding the will of any individual ruler. While this was a relatively novel concept in 4th-century Athens, it underpins most democratic constitutions in our world today, with the law keeping in check man’s worst tendencies (or, as Aristotle would put it, the human flaws of passion and desire).

Both Plato and Aristotle envisaged a city-state, but as great empires (first the Macedonian and then the Roman) held sway, the notion of government changed markedly. This gave rise to new philosophies – most notably Stoicism and Epicureanism. A notable proponent of this first was the last of the so-called Five Good Emperors of Rome, Marcus Aurelius, and the Stoic approach to duty and public affairs pulses through his Meditations. Many of his thoughts speak to us strongly today, in our quest for personal happiness, such as ‘You have power over your mind  not outside events. Realize this, and you will find strength.’

Saint Augustine of Hippo lived about a century after the establishment of Christianity as the predominant religion of the Roman Empire which, by that time, was in terminal decline. His Confessions embodies several ideas – including the stoic devotion to duty, the Platonic disdain for man’s baser instincts and a conflict between light and darkness. He rejected the Platonic idea that a ‘good life’ could be achieved by a well-ordered society. The outcome of human affairs was pre-ordained and our everyday interests are unimportant and even vulgar. Unsurprisingly, he argued it was the Christian church alone which was empowered to sanction government, an idea which underpinned political thought throughout medieval times. 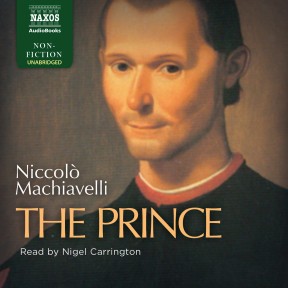 Jumping forward a thousand years we find the influential ideas of Machiavelli, whose name has become a byword for political scheming. One of his main ideas was that a successful ruler should be beyond morality, which is dwarfed by the needs of the state. Thus, politics is simply a ruthless fight for survival. Looking at our own times, this notion is much in evidence.

Our connection with the thinking of the past, whether through books or, indeed, audiobooks, can provide us with a different perspective on the world we inhabit today. This is especially true of the evolution of government over the past two millennia, and, in that context, humanity has changed little. Early political thought proposed checks and balances, even where there was a sole ruler – an idea which developed as more democracies emerged. One general consensus which remains is that good government is that which produces the most happy and harmonious society… However, the best means of achieving that is a discussion that will continue well into the future.