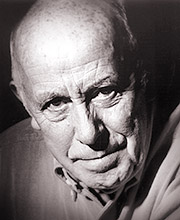 Richard Wilson’s portrayal of Victor Meldrew in One Foot in the Grave has won him numerous awards including the British Comedy Awards Top Television Comedy Actor Award and two Light Entertainment BAFTA Awards. In 1994 he was awarded the OBE for services to drama as a director and actor. He is the visiting professor for Drama at Glasgow University, and has honorary degrees from both Glasgow University and the University of Caledonia. He is an associate director of the Royal Court Theatre.