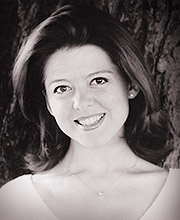 Jo Wyatt has worked as an actor and singer since she was nine years old. She has also worked extensively as a voice over-actor for projects such as Angelina Ballerina, Oswald, Franny’s Feet and Channel 4’s Bromwell High. Theatrical and TV highlights include Love Soup and Extras both for the BBC and the original London production of Ben Elton’s Popcorn. She has also read the part of Alice in Alice in Wonderland for Naxos AudioBooks.