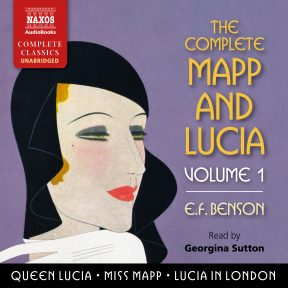 The author of the ‘Mapp and Lucia’ novels, E.F. Benson came from a notable family. Born in 1867 he was the third son of Edward White Benson, Headmaster of Wellington College and later Archbishop of Canterbury, and the younger brother of A.C. Benson, now best known for penning the words to Land of Hope and Glory. Having read Classics at King’s College, Cambridge, Benson then worked as an archaeologist in Athens for three years. His first novel, Dodo: A Detail of the Day, was received well on its publication in 1893 and foreshadowed the satire of contemporary society which was to pervade the later ‘Mapp and Lucia’ books.

Encouraged by this initial success Edward Frederic Benson (‘Fred’) moved back to London in 1895 to focus on his writing. Over the course of his life he was prolific, writing in a variety of genres: novels, short stories, horror stories and biography. In 1918 he moved to Lamb House in Rye, Sussex, which had previously been the residence of the writer Henry James, and served as Mayor of the town from 1934–1937.

Today he is best remembered for ‘Mapp and Lucia’, largely due to the numerous radio and television adaptations which have appeared. The series consists of six novels: Queen Lucia (1920), Miss Mapp (1922), Lucia in London (1927), Mapp and Lucia (1931), Lucia’s Progress (1935) and Trouble for Lucia (1939). All six books examine the mores of the upper-middle classes, snobbery, social climbing and all.

There is much entertainment… as war is waged over callisthenics classes, art exhibitions and, of course, the village fete.

The two protagonists, Elizabeth Mapp and Emmeline Lucas (‘Lucia’), do not actually come together until the fourth novel, Mapp and Lucia, and they go on to share a house (Mallards, based on Lamb House) in the seaside town of Tilling (based on Rye).

The first book typifies the flavour of the whole series. We find ‘La Lucia’ ruling the roost in the quaint Elizabethan town of Riseholme. She is determined to cement her position in that society, largely through organising a series of cultural events such as her musical evenings (‘un po’ di musica’) and thwarting any threats – whether from the Indian guru who arrives to school his pupils in yoga, or the glamorous opera singer, Olga Bracely. The second book presents something of a mirror image as we see Miss Mapp, too, striving to secure her social supremacy in her home town of Tilling, where bridge evenings and afternoon tea are the order of the day.

To eventually bring these two characters into each other’s spheres is what motivates the later books, as Mapp and Lucia vie for primacy in Tilling society. There is much entertainment for Tilling’s residents, and the modern listener, as war is waged over callisthenics classes, art exhibitions and, of course, the village fete.

Although they are the object of satire, the characters which Benson creates are in no way two dimensional. With their flaws and frailties they are all too human. Not without good reason have the novels remained popular since their initial publication, with enthusiasts including Gertrude Stein and W.H. Auden.