Wilkie Collins: Beyond The Woman in White 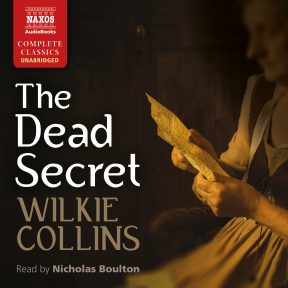 A few years ago at the birthday celebration of a mutual friend I met the actress Deirdra Morris. She is probably best known for her role as the ‘woman in white’, Anne Catherick, in the wonderful 1980s BBC dramatisation of the Wilkie Collins novel of the same name. Inevitably, we ended up talking about books and, more specifically, Wilkie Collins, who had long been on the Naxos AudioBooks radar. We had recorded his most popular novels, The Woman in White and The Moonstone, some years earlier, but that conversation prompted me to look more closely at his lesser-known works.

After a little research it became clear that the most ‘obvious’ books to tackle were Armadale and No Name. We undertook Armadale first and it was very clear, as with the two novels we had recorded earlier, that this lent itself to a multi-voice production as large parts of the novel consist of letters and diary entries through which Collins progresses his narrative. John Foley, the producer, drew up a list of voices we would need (most actors would voice several roles) and we discussed possible casting, contacted the relevant agents and began to put the pieces into place. The lion’s share of narrative belongs to the narrator (whom we imagined as the voice of Collins himself) and, for this role, we were able to recruit Nicholas Boulton. Nick is a vastly experienced audiobook performer and can be heard on many Naxos AudioBooks recordings. Lucy Scott took on several roles, including that of the conniving Lydia Gwilt. Each actor recorded their own sections and the project was successfully completed in the middle of 2019. We then went on to record No Name, also a multi-voice production, later in that year.

we wanted to explore Collins’s works further and set about looking at his remaining 19 novels – which to tackle next?

Encouraged by this experience we wanted to explore Collins’s works further and set about looking at his remaining 19 novels – which to tackle next? In the end, we decided on The Dead Secret. No scope within the text for a multi-voice production this time, but – again – Nicholas Boulton agreed to read it for us. The novel occupies an interesting position in Collins’s output – it came just before The Woman in White – and contains many of the elements that occur in much of his writing: mystery, mistaken identity and a long-hidden secret at the centre of the plot. Above all he shows himself to be one of the most gifted storytellers of his age. An obituary from 1889 cited The Dead Secret, along with The Woman in White, as being ‘the general favourites, among his novels, with the majority of the reading public.’ With Collins, as with other authors, there was frequently not much of a correlation between critical reception to his new novels and their immediate popularity.

As with several of his other novels, The Dead Secret was published serially – between January and June 1857 in Household Words, the periodical owned by his friend Charles Dickens. Collins had negotiated that his own name be properly credited – contrary to the usual practice. It was, in fact, the first novel that Collins had published in serial form, and he was often hard-pressed to keep up with the required printing deadlines. However, this did afford him the opportunity to draw out the narrative, with each episode concluding with a note of expectation. Like Dickens, Collins was much involved with the theatre (as both a writer and performer) and this is evident in much of his work, particularly in the structure and ‘scenery’ of his narrative.

Above all, The Dead Secret is a novel of suspense, and its setting in a remote area of Cornwall lends a fitting context to its deftly crafted plot. This is a compelling novel that demands to be read (and heard) by a modern audience.