Ovid’s Metamorphoses, like Homer’s Iliad and Odyssey, and Dante’s Divine Comedy, is a work that underpins Western literature. Completed in 8 AD, it is, first and foremost, an absorbing collection of myths and folk tales from the Greek and Roman traditions. In fact, in many instances, it is the only source we have of many important stories that were taken up for elaboration and exploration by subsequent artists, writers and musicians, from Shakespeare to Ravel.

But it is far more than just a repository. Two thousand years later, the poetry of Ovid is as immediate, entertaining and moving as it was during the time of Augustus, the emperor to whom Metamorphoses was nominally dedicated.

It is, therefore, rather inexcusable that it has taken us some 18 years to get round to recording it! With classic literature as the continuing brief of Naxos AudioBooks, we should have recorded it some time ago! But I can honestly say that our new unabridged recording was worth the wait. With David Horovitch reading the fresh verse translation commissioned from Ian Johnston, it is one of the jewels of our catalogue.

Ovid’s Metamorphoses came to prominence recently with Ted Hughes’s lively and even challenging translation of a selection of the tales. Ian Johnston is now a familiar name on Naxos AudioBooks: we have recorded his Homer, Lucretius and (as he translates from German as well) Kafka and Nietzsche. The hallmark of his work is his faithfulness to the text, which is, nevertheless, presented in an admirably direct and accessible manner. And though Johnston was an academic for his working life, there is never anything dull or ‘academic’ about his expression.

Late last year, David Horovitch (whose readings of The Good Soldier Švejk, The Leopard and Nicholas Nickleby for Naxos AudioBooks demonstrate his versatility) came into our studio in Motivation Sound in Hampstead, London. He was playing the doctor in Mike Leigh’s unforgettable production of Grief at the National Theatre, but it was in repertory, and he had a week off.

We had prepared and agreed on the myriad pronunciations of Greek and Roman names – with the considerable help of Ian Johnston who could not be in attendance because he lives in Canada! Because of his extensive and careful preparation, David could dedicate himself to the principal task of bringing alive these wonderfully engaging stories – all on the theme of transformation. 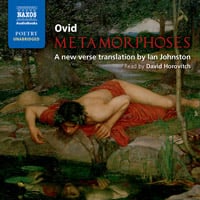 There is rapine and murder in abundance. There is pity and sympathy too, and enduring love, as in the affecting tale of Philemon and Baucis, changed into trees. Tale after tale, a treasure trove.

I cannot recommend it enough.

While we are on classical literature, this month sees the release of The History of the Peloponnesian War by Thucydides, read by Neville Jason. Widely regarded as the first genuine historical account, its portrayal of the war between Athens and Sparta still retains its vigour. We have recorded this as a generous abridgement made by the ubiquitous Ian Johnston, who has updated the clear translation by Richard Crawley.

Mr Johnston feels that it is important read Thucydides even now:

‘His work presents a very pessimistic tragic vision, not merely of the civil war among the Greek city states (which lasted from 413 to 404 BC), but also of the future course of human history. Since human nature drives historical events and since human nature does not change, the events he is describing will happen again. Hence, in his most famous sentence he can confidently claim “But those who want to look into the truth of what was done in the past—which, given the human condition, will recur in the future, either in the same fashion or nearly so—those readers will find this History valuable enough”, an assertion which has turned out to be all too prescient, given that Thucydides’ vision is frequently invoked to illuminate any number of modern wars (from Vietnam to Iraq).’

We have recorded this as a generous abridgement to make it more accessible to a broad audience.

Ian Johnston, the translator of Ovid’s Metamorphoses for Naxos AudioBooks, introduces our new recording of Thucydides’s The History of the Peloponnesian War: