It is best, when reporting major events, to keep the headlines simple. And within our world of audiobooks, this is certainly a major event. Of course, when Neville read War and Peace unabridged a few years ago, it was also a major event. But Proust’s 20th century epic is more than twice as long as Tolstoy’s 19th century epic. 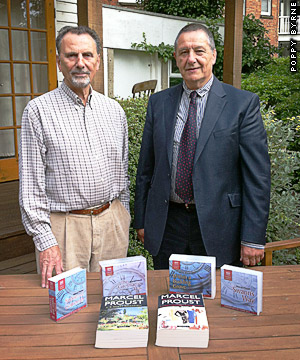 Neville finished reading it on 26 June 2012 – that is yesterday – as I write. And here are the photographs recording the moment, in the garden of Motivation Sound Studios in Hampstead, London, which hosts the Naxos AudioBooks studio within its complex.

I thought we should present two photos: one formal, looking at the camera, and another one expressing the reality more closely: Neville looking as if he can’t quite believe it, and me looking down at the recordings released so far in appreciation, and the books from whence they came. I suspect both of us were experiencing a similar mixture of elation and shell shock, though maybe those qualities showed in different proportions for both of us. And if you think this may be more emotion than should be displayed in a publisher’s blog, you have not encountered Proust.

It has been a truly stupendous process. Of course, Neville knew Proust well already, having recorded his 36 CD abridgement in the first decade of Naxos AudioBooks and having written a 3 CD biography of Proust. He has also completed a masterly 8 CD introductory abridgement to Remembrance of Things Past, for those who, initially, want to tread more lightly. We have found that some go on to the higher slopes, some do not.

Eventually, he said he didn’t feel quite ready to go up that particular mountain again, quite yet.

Then, last year, when I asked him again, and we discussed it further, he assented. We both knew, I think, that, however it happened, Proust had become a huge part of his life: there were many listeners all over the world for whom Neville had become synonymous with Proust and had written to say so, and the unabridged recording simply had to be done. As he said over a coffee yesterday: ‘I knew that if I didn’t do it now – when would I do it?’ You would never believe it from the sound of his voice, but Neville Jason is 78, and still one of the finest audiobook readers regularly working.

On 2 August 2011, he set off from his flat about 20 minutes walk across the park of Primrose Hill, threaded his way through the backstreets of Hampstead, and arrived at the studio. Without any fuss, he sat down at the microphone, opened the first page of Swann’s Way, and began. He didn’t need to take a deep breath. He comes from the old RADA-trained school of acting, where breath management and control were instilled in the first year of study (on graduation, Neville was awarded the diction prize by Sir John Gielgud) and he has never lost it. To be truthful, this is not understood by many of the younger generation who train for film and television, and are seriously challenged by anything approaching a Proustian sentence.

‘When I was first asked to read Proust unabridged, I was daunted by the thought,’ said Neville. ‘It is so huge! It is also a difficult read technically, with extremely challenging sentences which go on for pages, and few paragraphs or chapters. There is a vast cast of characters, who change as time passes, and the range and intensity of emotion also has to be managed. 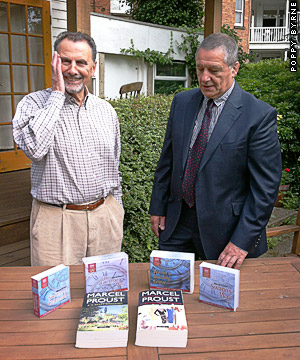 ‘But when I started to look at it not as one long novel, the longest novel of all, but seven separate novels, I began to think that I could do it after all. Seven novels, starting with Swann’s Way and finishing with Time Regained. Just take it one novel at a time.’

And so, sitting in front of the microphone on 2 August 2011, he started to read. He read for six days: three days on, the weekend off, and three days reading again. He took a week’s break and he was back again for Within a Budding Grove. This took seven days. It is a bit longer, running to 20 CDs (25.5 hours) as opposed to the 17 CDs (21.5 hours) of Swann’s Way.

Thus it went, at a regular pace, with time off for holidays and good behaviour. After The Fugitive, there was a wait. We had been using the original CK Scott-Moncrieff translation of Remembrance of Things Past, and for copyright reasons we couldn’t use the existing translation of Time Regained. So Naxos AudioBooks commissioned a new translation of the novel from David Whiting, who did excellent work and delivered on time for Neville to read in June. Time, so important to Proust, was also an element in this total production, because we wanted the complete work to be available in time for Christmas 2012.

Time Regained is being edited as I write. It will be listened to by Emma Poutney, one of our redoubtable team of listeners (a very important part of the process: listeners pick up missed edits, incorrect or inconsistent pronunciations, creaking chairs or paper rustles. She has listened to the whole of Neville’s Proust, and also deserves a mention).

We think Time Regained will be 12 CDs, around 15 hours, but as it is still in post-production, we do not know for sure. BUT, if that is the case, Neville Jason’s unabridged recording of Marcel Proust’s Remembrance of Things Past will run for around 150 hours and will be enshrined on 118 CDs.

Being an extremely particular person, Marcel Proust himself would probably have viewed the project with concern, delight, enthusiasm, despair, pride, horror and amazement. He would have sent Neville REAMS of notes, demanding that that be changed and that be expunged, and expired on his puffed-up pillows in a bit of a lather.

But inwardly, I think he would have been pleased. Very pleased indeed!