Naxos Ebooks: now you can read as well as listen!

Though Naxos AudioBooks is principally known for its recordings of the classics, it has, from its earliest years, produced original texts. In fact, it remains the only audiobook label to regularly produce new work: adult and junior, non-fiction, fiction and translations of poetry and prose.

And some of them are among the bestsellers on the label. Benedict Flynn’s King Arthur and the Knights of the Round Table and Edward Ferrie’s Tales from the Greek Legends are favourites with succeeding generations of younger listeners. Flynn’s new translations of Dante, too, are widely admired.

So is the ‘History’ series – A History of the Olympics, The History of English Poetry and the shorter ‘In a Nutshell’ texts.

I am glad to say that we are now launching them as ebooks! From this month, these texts can be downloaded as ebooks for the various popular formats: for the Kindle from Amazon; for the iPod, iPhone and iPad from iBooks; and, in the US, for the Nook from Barnes and Noble.

Side by side come ‘enhanced’ ebooks from Naxos Books – biographies of composers with music extracts embedded in the book. Thirteen of these are already available, including Tchaikovsky: His Life and Music, Shostakovich: A Portrait and Johann Baptist Vanhal: A Short Profile. All these music titles have extracts (sometimes more than 30!) – put into historical context – which you can listen to as you read: an ideal medium for a music biography. These enhanced ebooks are currently only available from iBooks to be played on the iPod, iPhone and iPad, but it will not be long before they are available on many other mobile devices. 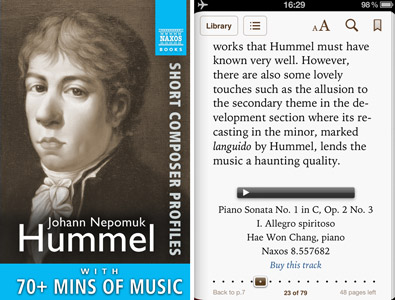 The interactive ebooks – such as the Hummel Profile – contain music extracts embedded in the book.

This is an important development for us. Increasingly readers want to read digitally. Perhaps surprisingly we are often asked for a script so that the customer can read the story while listening to the audiobook. This may be because English is not their first language; or because it offers a way of improving reading ability; or simply for enjoyment. It is easy with a Dickens or an Austen, because these texts are easily available, but not with a Naxos original text!

For those who have subscribed to www.naxosspokenwordlibrary.com, it’s possible to listen and read: the texts are up there! If you don’t know about this streaming service from Naxos, please pay a visit! For a relatively small annual subscription cost, you can listen 24/7 to the entire Naxos AudioBooks catalogue. And there is an NSWL app for the iPhone, which enables you to listen on the move!

But now you can buy our ebooks – to read on their own, if you prefer.

We are launching this month with 12 titles! It is a very rich and varied list.

We start with the most topical: A History of the Olympics by John Goodbody, a fascinating account which brings you right up to the present day and includes a fascinating personal Olympic memoir from Sebastian Coe himself.

There is Dante’s Divine Comedy in the new verse translation by Benedict Flynn. There are four ‘In a Nutshell’ releases: Afghanistan, Tibet, The Renaissance and Confucius. Two junior titles are included in this first release, and others will follow: Roy McMillan’s entertaining and informative Pirates! and the aforementioned King Arthur and the Knights of the Round Table.

Finally, there are two ‘composer’ titles: Mendelssohn: His Life and Music and the lesser-known but fascinating Ferdinand Ries: Short Profile, (Ries was a contemporary of Beethoven whose reputation is currently being reassessed since the release of the piano concertos played by Christopher Hinterhuber for Naxos, which can be heard in this enhanced ebook).

There are seven releases in July, including Peter Whitfield’s absorbing The History of Science, and for younger listeners, Great Scientists and their Discoveries by David Angus. We are also releasing Discover Music of the Romantic Era in enhanced format with many music examples.

BLOOMSDAY – JUNE 16. This annual event is wonderfully recognised in Dublin every year (and no – I am not receiving a commission from the Irish Tourist Board for the plug!). It is, of course, the anniversary of the day (in 1904) that Leopold Bloom walked out into Dublin in Ulysses. Events take place all over the city to recall the places he visited, what he did, how he interacted with Stephen Dedalus – and, of course, the activities and hopes, fears and loves of his wife, Molly Bloom.

If you can’t get over there – and I hugely recommend it at least once if you have fallen under the Joycean spell – you can do worse than listen to Molly’s famous soliloquy that ends the book. One day some time ago I had this bizarre idea to release the soliloquy on a CD of its own. Why? Well, because it was there! VERY strangely, only a very vague idea of what Ulysses is about is needed to let this stream of thoughts and memories get under your skin. It has its own magic.

Marcella Riordan, a Dubliner and Molly down to her toenails, reads the soliloquy remarkably on both our abridged and unabridged versions of Ulysses. Molly is lying in her bed. Her husband, Leopold, has come home after his day of wandering. She has been out meeting her lover Blazes Boylan, with whom she gives concerts, singing Là ci darem la mano from Don Giovanni.

She muses. Her mind wonders about the day, her husband, life and its meaning, hopes, aspirations – and somehow she comes to terms with it all. A life-enhancing experience! Listen to it. You will see what I mean.