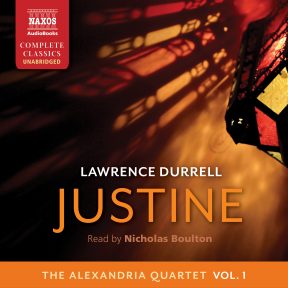 Recent releases from Naxos have included Nicholas Boulton’s splendid performance of Lawrence Durrell’s The Alexandria Quartet. The four books were commercially and critically celebrated on their release (between 1957 and 1960) and collectively remain the author’s most well-known work. The novels are not at all straightforward (often with digressions along the way) and the language and texture are particularly rich and rewarding, with the often exotic characters strikingly portrayed.

In his note to Balthazar, the second book in The Alexandria Quartet, the author offers a succinct summary of the structure of all four volumes. He describes the first three novels as ‘siblings’: ‘They interlap, interweave, in a purely spatial relation. Time is stayed. The fourth part alone will represent time and be a true sequel.’ The perspectives throughout the four books shift. In the first two books in particular we often witness the same events through different viewpoints.

The first instalment of the Quartet, Justine, is narrated by the Quartet’s main protagonist, the impecunious teacher Darley, who has removed himself to an unspecified island in the Cyclades in order to ‘recover’ from his love affair with Justine.

It is Darley’s arrival in Alexandria in 1933 which begins the narrative and the central theme running through Justine, which is relationships – most prominently Darley’s with both Melissa (‘washed up like a half-drowned bird’), who is also pursued by a married man, Cohen, and Justine (‘not really human – nobody wholly dedicated to the ego is’), who herself is married to the wealthy Egyptian businessman, Nessim.

Balthazar presents a revision of the events of Justine through the commentary (‘the great interlinear’) on Darley’s manuscript for Justine, written by the Alexandrian doctor, Balthazar. In the author’s own words, ‘The central topic of the book is an investigation of modern love.’ The narrative viewpoint shifts within the book, beginning with Darley, then Balthazar, and concluding with a third person perspective.

In the third book, Mountolive, the narrative is taken up by the third person. Through those eyes Darley then becomes an objective character and the book adds a political overlay to the accounts in its two predecessors – the title ‘Mountolive’ being taken from the name of the serving ambassador, David Mountolive.

There is a gap of six years between Mountolive and the final volume in the Quartet, Clea, and Alexandria has become embroiled in the Second World War. Clea, who appears in the previous three volumes, is a painter (she paints several of the main characters in the Quartet as Darley has done – with words – in his earlier narrative). Many of the characters find resolution, not least Darley himself who settles down with Clea, unhindered by the distraction of the presences of both Melissa and Justine.

In the Quartet, Durrell draws a wide variety of vividly portrayed characters, with the action flitting between personal and political matters. But perhaps the most important character of all is the city of Alexandria, which he describes thus: ‘The city which used us as its flora – precipitated in us conflicts which were hers and which we mistook for our own: beloved Alexandria!’