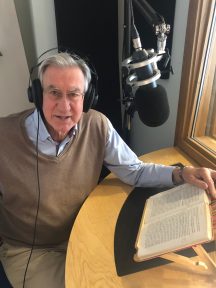 It’s a huge responsibility recording any novel to audiobook. You are taking choice and interpretation away from the reader (now listener), fixing the tone of the narration and giving characters a voice. So you want to get it right. But what if there is no ‘right’? What if scholars have been poring over the novel for decades, offering snippets of wisdom to help unravel a web of complexity and deliberate confusion, where characters emerge and disappear with few clues to their identity?

Well, it helps to be starting out with a reader who is already fully immersed in the work. I thought I knew quite a bit about Finnegans Wake, but every day and every hour of our recording sessions Barry McGovern taught me more. Yes, he is a Dubliner – from Chapelizod no less: the very village where the Wake’s central characters reside – but he is also a linguist and musician whose knowledge of the Irish language and Irish popular song I couldn’t begin to rival. And those are very valuable competences when tackling this novel; they help to unlock many seemingly obscure phrases and references. He is also, of course, a consummate actor with a voice that exudes authority, and with an impeccable ear for accents.

Many of the difficulties fall away in Barry’s reading, and those that remain at least sound wonderful!

Finnegans Wake really has to be heard. We all, to some extent, ‘hear’ characters when reading – our interpretation limited by how much we have been told about them and whether we can imagine their accent. We hear West Country, as best we can, when reading Hardy, and London accents when reading Dickens. Joyce’s characters are mostly Irish, and sometimes we can assume they are Dubliners, but often they are not, and usually we are left to pick up clues as best we can: a Norwegian ship’s captain, an American detective, and the omnipresent four inquisitors who hail from Belfast, Dublin, Galway and Cork respectively, though Joyce doesn’t tell us that very clearly and certainly doesn’t make it easy for us to decide which of them is talking at any single point. Probably Barry’s most frequent question during the recording sessions was: ‘now, wait a minute – which one is this?’. It matters, because their accents are so markedly different.

The novel is also full of musical references. How do we deal with those when reading? If the writer quotes a few words from a song – and if we know the song and recognize those lyrics – do we hear the melody in our head? In Finnegans Wake there are hundreds of quotations or paraphrases of well-known tunes like D’ye ken John Peel. Do we hear it? And what about the less well-known songs, like She is far from the land? Frequently Barry would ask me ‘now this is from a song, will I sing it?’ I wouldn’t have known.

I hope we made the right choices most of the time, but in any case I am certain that even the most well-informed student of Finnegans Wake will find themselves enlightened by this audiobook version. Many (but by no means all) of the difficulties fall away in Barry’s reading and the equally wonderful contributions from Marcella Riordan, and those that remain at least sound wonderful!