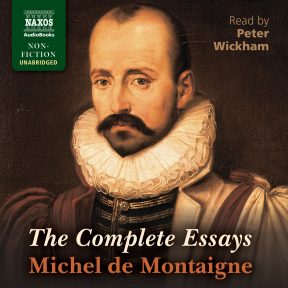 When I lately retired to my own house, with a resolution, as much as possibly I could, to avoid all manner of concern in affairs, and to spend in privacy and repose the little remainder of time I have to live, I fancied I could not more oblige my mind than to suffer it at full leisure to entertain and divert itself, which I now hoped it might henceforth do, as being by time become more settled and mature.

Few writers have had as lasting an impact as Michel de Montaigne, arguably the most influential literary figure of the Renaissance. He had a direct effect on, amongst others, Francis Bacon, Descartes, Pascal, Montesquieu, Burke, Voltaire, Rousseau, Marx, Freud, Darwin and Nietzsche. He is now known for popularising the essay (a genre adopted by many later writers), but also for his humanistic approach, which was, in many ways, well ahead of its time.

Montaigne was born in 1533 to a wealthy family – the family estate Chateau de Montaigne is close to Bordeaux. His father had advanced ideas on bringing up children, and the first three years of Montaigne’s life were spent with a peasant family, so as to ‘draw the boy close to the people, and to the life conditions of the people who need our help.’ On his return to the chateau his education was entrusted to a German tutor who was unable to speak French – the intention being that the boy’s first language would be Latin, in which he was fluent by the age of six.

After his legal training, he was appointed Counsellor to the Bordeaux Parlement and much of his work involved preparing arguments (on both sides) to come before the judiciary there. This balanced approach appears to have informed the Essays, where different perspectives are often presented. It is also notable that at a time when religious wars were raging within France (his own family found itself on different sides of the post-Reformation religious divide) he was on friendly terms with both the Catholic King Henry III and the Protestant Henry of Navarre. At the age of 38 he retired from public life; he lived in one of the towers of the Chateau de Montaigne, with his wife (Francoise de las Cassaigne) inhabiting another, and his mother in between the two. We know he had access to an extensive library of some 1,500 books.

many of Montaigne’s ideas, now over four hundred years old, still speak to us today

He was heavily influenced by several classical authors, most notably Seneca, Plutarch and Lucretius – indeed, we still have a copy of the latter’s De Rerum Natura annotated in Montaigne’s own hand. However, it is Seneca’s writing style that Montaigne’s most closely resembles in the Essays, because of its discursive narrative with personal reminiscences and the odd pithy comment, and the occasional use of an epistolary structure. At the time this style was often seen as detrimental to his credibility as by putting himself and his thoughts at the centre of his text he was criticised for self-indulgence.

Doubt and scepticism run through the Essays; Montaigne’s most famous observation is ‘What do I know’ from the lengthy ‘Apology for Raymond Sebond’, itself a demolition of the human claims to knowledge. It is not surprising therefore that both the Stoicism of Seneca and the Epicureanism of Lucretius appealed to him. An undoubted influence on him was his close boyhood friend Etienne de la Boétie, who became notorious for his anarchist essay The Anti-Dictator, which was later banned. It has been suggested that de Boétie’s early death was a direct reason for why Montaigne wrote the Essays, since writing took the place of the dearest friend with whom Montaigne was no longer able to communicate.

In ‘On Friendship’, Montaigne discusses the meaning of true friendship:

For the rest, what we commonly call friends and friendships, are nothing but acquaintance and familiarities, either occasionally contracted, or upon some design, by means of which there happens some little intercourse betwixt our souls. But in the friendship I speak of, they mix and work themselves into one piece, with so universal a mixture, that there is no more sign of the seam by which they were first conjoined. If a man should importune me to give a reason why I loved him, I find it could no otherwise be expressed, than by making answer: because it was he, because it was I.

The Essays themselves cover an amazingly broad range of topics – virtues, passions, along with more unusual subjects such as witchcraft, thumbs, smells and cannibalism. Running through the work are suggestions of how one can live and be at peace with oneself, another point of similarity with Seneca. Our newly released audiobook, masterfully read by Peter Wickham, is perfect for dipping into – and many of Montaigne’s ideas, now over four hundred years old, still speak to us today.