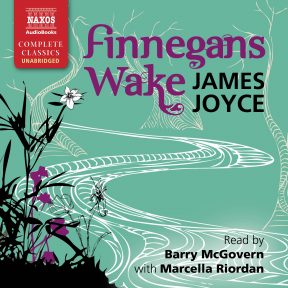 As another new year approaches, it is natural to look back on the past 12 months – a year in which we have published several notable new productions. As Naxos AudioBooks nears the completion of its third decade there remains an almost infinite choice of texts to take on – a journey that reveals many fascinating discoveries.

2021 was a year of firsts for us, and none more so than our groundbreaking recording of James Joyce’s Finnegans Wake. This is a landmark in the history of audiobooks and builds on our existing acclaimed recordings of works by the same author, most notably Ulysses. The two recordings were made over 20 years apart, but Roger Marsh produced/directed both, and they both feature Marcella Riordan, even though the vast majority of the text in ‘Finnegan’ was performed by Joyce specialist Barry McGovern. It was a particularly difficult project to put together, but it met with deserved immediate acclaim, with The Times praising ‘Barry McGovern’s boisterous but doomed hod-carrier Finnegan and his friends warbling Irish ballads and Marcella Riordan voicing Anna Livia Plurabelle as wonderfully as she did Molly Bloom on Naxos’s Ulysses.’

Following on from the successful productions of Armadale and No Name, our survey of the novels of Wilkie Collins continued with the release of The Dead Secret and Man and Wife. Once again Nicholas Boulton won much admiration for his narration, with The Dead Secret winning an Earphones Award from AudioFile Magazine: ‘The magic lies in Boulton’s flawless rendering of the richly nuanced characters of all ages, genders, nationalities, and social classes’ (AudioFile).

David Timson has established himself as a firm listener favourite and is never one to shirk a challenge – his previous readings for Naxos AudioBooks include the complete Sherlock Holmes canon, Edward Gibbon’s The Decline and Fall of the Roman Empire and Boswell’s The Life of Samuel Johnson. In early 2021 we published his performance of John Galsworthy’s The Forsyte Chronicles, a monumental project – its three parts coming in at over 100 hours. The books were famously adapted for both television and radio, though those versions do not always remain faithful to the books. As always with Naxos AudioBooks, our production remains true to the author’s text, and it is wonderfully read by David Timson.

Another book series that has been adapted for television and radio is E.F. Benson’s Mapp and Lucia. Wickedly well-observed satires of one-upmanship in an English village, these novels are delightfully read by Georgina Sutton. Like many of the books we record, these very much benefit from being read out loud, particularly when done with such panache. Unsurprisingly, both volumes are amongst our most popular releases of the year.

Once again Nicholas Boulton gives a bravura performance when he reads Lawrence Durrell’s The Alexandria Quartet, a highly evocative portrayal of love and passion in the exotic location of Alexandria. Boulton perfectly captures the rich texture of the four novels that comprise this modern classic.

Of course, this is just a small selection of our productions released during the course of the year and our website gives full details on our whole catalogue. The next 12 months will see many more new releases from Naxos AudioBooks. In the meantime we wish you a restful holiday and many hours of enjoyable listening in 2022.