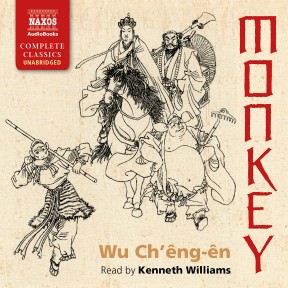 Considered one of China’s great classical novels, Wu Ch’êng-ên’s Journey to the West was translated by Arthur Waley in abridged form as Monkey in 1942 and has delighted English readers ever since. It is a riveting adventure story about a priest’s quest to obtain holy Buddhist scriptures for the Tang emperor. Joining him on this rollicking journey: Sandy, Pigsy and the mischievous Monkey King, Sun Wukong, whose flying cloud and magic cudgel are never far from his infamous deeds. Waley’s accessible rendition of Wu Ch’êng-ên’s novel has become a classic in its own right: Gods, demons and disobedient monkey spirits all come alive in this entertaining work.

Kenneth Williams was one of the most popular comic actors of his generation. His extensive career included roles in theatre, television and film, the most famous being his work as a key member of the Carry On cast, with which he performed in 26 films in the long-running series. He is also remembered for his radio work with Tony Hancock (Hancock’s Half Hour) and Kenneth Horne (Beyond Our Ken and Round the Horne).

Kenneth Williams – best known from the British Carry On films – gives an extravagantly theatrical performance of Waley’s adaptation of a Chinese classic (Journey to the West), matching the fantastic world of the story, filled with Chinese deities and monsters and Monkey’s larger-than-life shenanigans. Williams provides many character voices, some rather silly, rolls his r’s, exclaims, declaims, and verbally ‘carries on’, but avoids going over the top by changing to a sedate narration at well-chosen intervals. He fills China with an assortment of British class and regional accents, but it works. An echoing sound in this archival recording, no worse than in some theatrical recordings, fades from notice without distracting. It’s a bravura performance of a delightful text; Naxos deserves thanks for making a great listening pleasure available again.