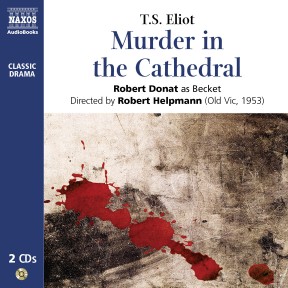 Murder in the Cathedral

T.S. Eliot’s Murder in the Cathedral is both a fascinating retelling of the twelfth-century assassination of Archbishop Thomas Becket and a compelling call for resistance in the face of intimidation. Written against the backdrop of rising Fascism in twentieth-century Europe, Eliot’s classic verse play is as relevant now as it ever was. This re-release of the original 1953 recording stars Robert Donat whose commanding performance as the Archbishop, alongside a full cast, is widely celebrated.

Titles by T.S. Eliot
Murder in the Cathedral (unabridged)

Murder in the Cathedral revives the awesome 1953 Old Vic performance of Eliot’s play about the power struggle between Henry II and Thomas Becket, originally performed in the cathedral itself at the 1935 Canterbury Festival. In it you will hear echoes – ‘Humankind cannot bear very much reality’ – taken up in Burnt Norton. The cut-glass feminine vowels of the chorus annoy in the opening scenes, but persevere: this was Robert Donat’s finest performance.

This re-release of the 1953 recording of Eliot’s poetic drama is a real treasure. Robert Donat plays the pious Archbishop Thomas Becket as he struggles with his instinctive knowledge that King Henry II’s loose tongue will make Thomas a martyr. Donat’s Thomas is sensitive and resigned, without being annoyingly sanctimonious. Also of note are the excellent performances of Thomas’s tempters and of the Chorus. A knowledge of the history is essential to understanding the story as Eliot’s playwriting is a bit demanding for the casual listener. …a smooth, clean production and performance.

It took me a few minutes to get used to this 1953 Old Vic production of Eliot’s verse play about the murder of Thomas Becket in Canterbury Cathedral in 1170, directed by Robert Helpmann. I’ve never warmed to women choruses, especially ones with such plummy accents as this lot, talking about heppy, not happy, and Chianteh-berry. Still, you get used to them, and by the time Becket, played by the immortal Robert Donat, fearlessly confronts his assassins, you’re biting your nails with the tension. A classic period piece.

It took me a few minutes to get used to this 1953 Old Vic production of Eliot’s verse play about the murder of Thomas Becket in Canterbury Cathedral in 1170, directed by Robert Helpmann. I’ve never warmed to women choruses, especially ones with such plummy accents as this lot, talking about heppy, not happy, and Chianteh-berry. Still, you get used to them, and by the time Becket, played by the immortal Robert Donat, fearlessly confronts his assassins, you’re biting your nails with the tension. A classic period piece.

When the Bishop of Chichester com-missioned the poet and dramatist T.S. Eliot to write a play for the Canterbury Festival of 1935, Eliot decided to link his subject matter with the location and chose to write about the martyrdom of Thomas Becket, Archbishop of Canterbury from 1162 until his brutal murder within his own Cathedral church on 29 December 1170.

The story is well-known: the conflict between Thomas Becket and his royal master Henry II, which was sparked by the King’s secular interference in spiritual matters, culminating in a deadlock between these two strong personalities and the subsequent murder of Thomas by knights loyal to their king, who, legend has it, called out beseechingly in an angry moment, ‘Will no one rid me of this turbulent priest?’

These are the events which provide the basis of Murder in the Cathedral, but it is not told in chronicle format; Eliot structures the story in the manner of a Shakespeare play in which the events matter less than the situations. It examines the conflict between the material and the spiritual worlds, and Becket’s journey from spiritual doubt to certainty as he prepares for martyrdom, as well as the effect his actions have on the people of Canterbury.

Interestingly, Eliot had been on his own spiritual journey in the 1930s. There had been a gradual burgeoning of his Christian awareness throughout his poems in this period as his agnosticism faded and his attraction to Catholicism developed. Eliot’s growing conversion to the Roman Catholic faith contributed greatly to the style of Murder in the Cathedral. It is a ritualistic poetic drama, giving the writer an opportunity to consider the inner thoughts and doubts of the central character, Thomas Becket. These thoughts centre on the nature of martyrdom; it is not seen as an act of personal glorification, but the acceptance of  man’s will being subdued to the will of God – the path shown to man by Christ himself.

For the poetic style of his play, Eliot went back to the roots of the drama, Greek tragedy, which was an act of religion, ritual, purgation and renewal. Later, the medieval morality play sought to achieve the same response from its audience by imaginative example, the anonymously written Everyman being the masterpiece of this genre. Murder in the Cathedral’s verse structure is based on the rhythms of Everyman, as is the ritual element and the symbolism of the characters. From Greek tragedy, Eliot borrows the Chorus, which comments on and responds to the developing drama.

The Chorus of the women of Canterbury is not however entirely symbolic; it is rooted in humanity and acts as a mirror for the audience to see and hear its own responses expressed. The tempting of Becket in the first part of the play reflects Everyman’s struggle to overcome his earthly strengths (Knowledge, Strength, Discretion etc) and let his Christian spirit alone prevail over all-conquering death. Eliot was keen to re-invent verse drama, which had largely become moribund in its imitation of Shakespeare, developing its ancient forms to suit a modern play. For instance, he uses the power of modern prose to shock when the knights try to justify their actions.

Murder in the Cathedral is constructed with medieval simplicity:

Interlude – His doubts resolved, Becket affirms his beliefs in a sermon preached on Christmas Day.

Part II – Becket’s murder, and its meaning and effect on the people.

The Te Deum at the end unites the past with the present in the ever-continuing, unchanging liturgy of the Church. It is an act of ritual worship and prayer, celebrating one man’s journey from doubt, through a struggle with pride, to renouncing self-will and embracing spiritual purity.

The play can also be read on another level, as an examination of individual conscience at variance with the State. This theme is most pertinent when one remembers it was written in 1935, when Europe was under the threat of Nazism and Adolf Hitler, and in the years to come, many were to find themselves and their consciences tested.

This historic recording of Murder in the Cathedral stars the great actor Robert Donat in one of his finest roles. The first-night ovation is reputed to be the longest in theatre history. But as Donat portrayed Becket’s spiritual struggles on stage, he was also battling with the physical disabilities of asthma and bronchitis. For the run of Murder in the Cathedral, at the Old Vic Theatre in 1953, oxygen machines were kept in the wings and an understudy was on standby to take over at any point. Ill-health meant that Becket was the last part Donat played on stage. He died in 1958 at the age of only 53.

Robert Donat was born in Manchester in 1905 and overcame a serious stammer to pursue his enthusiasm for performing. He left school at 15 to work for his elocution and stage teacher, James Bernard, making his stage debut a year later in Julius Caesar and taking up an apprenticeship with Sir Frank Benson’s renowned Shakespeare company in the 1920s. Donat excelled in Shaw, Wilde and Shakespeare, and he also had a splendid film career in the 1930s, but the theatre remained his first love throughout his acting career.

In the cinema, Donat is best-known for his Academy Award-winning performance as the eponymous teacher in Goodbye Mr Chips, and as Edward Hannay in Hitchcock’s thriller The 39 Steps. However, ill health restricted his film-making in later years, his last appearance being in The Inn of the Sixth Happiness with Ingrid Bergman.

This recording of Robert Helpmann’s classic production is a fitting tribute to a great British actor who had a particular affinity with the verse of T.S. Eliot.