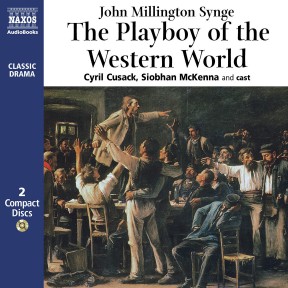 The Playboy of the Western World

One of the best-known Irish playwrights, John Millington Synge premiered The Playboy of the Western World in 1907. It immediately provoked controversy, eventually resulting in the infamous ‘Playboy’ riots. It has been recorded and adapted many times, but this timeless recording stars the Irish actors who made it a classic, including Siobhan McKenna and Cyril Cusack.

Bad plays are hissed; good plays are cheered. There are few occasions when a play is so controversial as to unleash violent passions and cause a serious riot at its premiere. The Playboy of the Western World was just such a play. At its first performance on 26 January 1907 there were violent protests from the audience, which continued throughout the first week of its run, and were repeated by Irish Americans during its tour of New York, Boston and Philadelphia in 1911. The growing nationalist movement in Ireland found Synge’s play morally offensive and patronising towards the Irish peasantry, who are comically shown as having double standards when faced with a moral dilemma.

Its author John Millington Synge seemed surprised at the reaction, and said: ‘We shall have to establish a Society for the Preservation of Irish Humour.’ For although The Playboy of the Western World is a comic masterpiece, for some years afterwards the reaction it provoked eclipsed its merits.

As a young man studying abroad, Synge had come under the influence of the poet W. B.Yeats, then living in Paris, who persuaded him to concentrate on his own culture rather than Europe’s. Synge took Yeats’s advice and produced drama rich in Irish folklore and dialect. In The Playboy of the Western World, for instance, he explores both the power of a community to shape an individual’s future, and the influential power of language.

Synge joined forces with Yeats and the playwright Lady Gregory to create the Abbey National Theatre in Dublin, which was to become the home of native Irish drama.

Synge’s play is a celebration of life – Irish life – in all its richness. Its language, humour, ironies and contradictions all tumbled into the melting-pot to give a slice of the real life of the Irish people, shaped with all the skill of a great poet. Synge believed that reality could be best expressed through poetry. In his preface to this play, he stated that he was aiming at reality, ‘which is the root of all poetry, in a comprehensive and natural form’.

The moral dilemma facing the community is occasioned by the arrival of a stranger, Christy Mahon, who declares to the assembled villagers in the pub that he has killed his father. Sympathy and celebration mark the response of the villagers, with no judgement of his actions. But their attitude begins to change as Christy and the feisty Pegeen Mike, the landlady of the pub, become attracted to each other.

It is native Irish humour that Synge enjoys, and The Playboy of the Western World is above all a comedy, although it is based on a tragic story that he had heard in the Aran islands:

A Connaught man killed his father with a blow of a spade when he was in a passion, and then led to this island and threw himself on the mercy of some of the natives… They hid him in a hole… and kept him safe for weeks, though the police came and searched for him…

Synge recognised that those living in rural Ireland had little or no respect for a justice system imposed on them by the English; and an act of violence, if committed in a passion, was as ‘irresistible as a storm on the sea.’ A murderer who showed heartfelt remorse for his rash action had been punished enough in their eyes. It is from this viewpoint that Synge creates his play.

Synopsis
The action of the play takes place entirely in a country pub near a village on the wiId coast of County Mayo in western Ireland. Here live publican Michael Flaherty and his fiery daughter Pegeen. She is being courted by the fat and cowardly Shawn Keogh, whom she despises, and when young Christy Mahon appears with a tale of killing his bullying father with a single mighty blow of his spade, she is fascinated. If feelings are developing between Christy and Pegeen, they are not allowed to mature before others try to turn Christy’s head. The village girls find him fascinating too, as does Widow Quin, and Christy becomes the local hero, even winning the village mule race as a true ‘playboy of the western world.’ However, his credibility is destroyed when his father appears, nursing a fractured skull and telling tales of his miserable puny son. Christy is no longer able to sustain the hopes and dreams that the village has invested in him, and is devastated when he loses Pegeen’s love, so much so that he attacks his father a second time. Now the gap opens irrevocably between the ‘gallows story’ and the ‘dirty deed’, with the ‘dirty deed’ all that the community see, and they turn violent towards him. The peasantry, thinking that Christy really has killed his father this time – and with them all as witnesses – try to string him up. Pegeen leads them in the effort to bring him to due process of the law. Christy is appalled to see Pegeen turn on him, and she even brands him with a turf ember. But Old Mahon recovers, to Christy’s amazement, ‘to be killed a third time’, and in the end, father and son leave together with considerably more mutual respect, leaving Pegeen to lament in an agony of solitude that she has ‘lost the only playboy of the western world.’

The Recording
This classic production of Synge’s masterpiece stars two of the greatest Irish actors of the post-war years: Siobhan McKenna and Cyril Cusack.

John Millington Synge’s Original Preface:
In writing The Playboy of the Western World, as in my other plays, I have used one or two words only that I have not heard among the country people of Ireland, or spoken in my own nursery before I could read the newspapers. A certain number of the phrases I employ I have heard also from herds and fishermen along the coast from Kerry to Mayo, or from beggar-women and balladsingers nearer Dublin; and I am glad to acknowledge how much I owe to the folk imagination of these fine people.

Anyone who has lived in real intimacy with the Irish peasantry will know that the wildest sayings and ideas in this play are tame indeed, compared with the fancies one may hear in any little hillside cabin in Geesala, or Carraroe, or Dingle Bay. All art is a collaboration; and there is little doubt that in the happy ages of literature, striking and beautiful phrases were as ready to the story-teller’s or the playwright’s hand, as the rich cloaks and dresses of his time. It is probable that when the Elizabethan dramatist took his ink-horn and sat down to his work he used many phrases that he had just heard, as he sat at dinner, from his mother or his children. In Ireland, those of us who know the people have the same privilege. When I was writing The Shadow of the Glen, some years ago, I got more aid than any learning could have given me from a chink in the floor of the old Wicklow house where I was staying, that let me hear what was being said by the servant girls in the kitchen. This matter, I think, is of importance, for in countries where the imagination of the people, and the language they use, is rich and living, it is possible for a writer to be rich and copious in his words, and at the same time to give the reality, which is the root of all poetry, in a comprehensive and natural form. In the modern literature of towns, however, richness is found only in sonnets, or prose poems, or in one or two elaborate books that are far away from the profound and common interests of life. One has, on one side, Mallarmé and Huysmans producing this literature; and on the other, Ibsen and Zola dealing with the reality of life in joyless and pallid words. On the stage one must have reality, and one must have joy; and that is why the intellectual modern drama has failed, and people have grown sick of the false joy of the musical comedy, that has been given them in place of the rich joy found only in what is superb and wild in reality. In a good play every speech should be as fully flavoured as a nut or apple, and such speeches cannot be written by anyone who works among people who have shut their lips on poetry. In Ireland, for a few years more, we have a popular imagination that is fiery and magnificent, and tender; so that those of us who wish to write start with a chance that is not given to writers in places where the springtime of the local life has been forgotten, and the harvest is a memory only, and the straw has been turned into bricks.