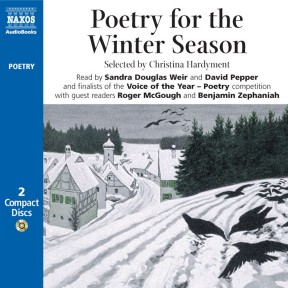 Poetry for the Winter Season

In November 2005, hundreds of people submitted recordings of Shakespeare, Wordsworth and Roger McGough in an attempt to win a prize – participation in the recording of this new poetry collection by Christina Hardyment, historian and audiobook reviewer for The Times. The collection covers a wide range of classics by Shakespeare, Keats, Clare, Blake and others, as well as modern poems by Roger McGough among others. They are read mainly by the male and female first prize winners, but also by the runners-up. Poetry reading is alive and well in Britain!

How very much poetry was and still is meant to be read aloud becomes very obvious in Poetry for the Winter Season. This 2-CD collection is the final release of a poetry series in audio book format read by amateurs rather than trained actors, and also by a few modern poets reading their own work or that of others. This series was inspired by a competition in 2005. Hundreds of people across Britain submitted readings that were collected by Christina Hardyment, audio book reviewer for The Times. The prize for the winners, and a few runners-up, was inclusion in this series. When it comes down to it, we are also winners in the long run because we can spend time being entertained, amused, as well as challenged by the poems that appeared in the series, including by these winter poems that allow us to reflect on this season. Winter is my second most favorite season, surpassed only by fall. The poems in this collection speak to me, but I am convinced they will also speak to anyone who loves poetry, or who may want to discover it. Reading is not always the best way to become familiar with the works of poets, so we must thank Hardyment and Naxos for conceiving this series, ending with the Winter Season. To allow us to hear the words rather than have to rely on our own inner senses to grasp the meaning and intend of these poems. Rather than being listed chronologically, the collection of poems are groups into themes, under the headings The Start of Winter, Winter Fires, Children in Winter and three readings under the heading of Deep Winter on CD 1. Deep Winter is continued on CD 2, followed by Winter Hardship, Romancing Winter, Christmas Time, and finally New Year. There are many poets represented in this collection, too many to list all. Among them are John Betjeman, who starts this collection off with Winter At Home, W. B. Yeats, William Cowper, A. E. Housman, the Chinese poets Shu Hui (A.D. 265-306) and Lu T’ung (A.D. 790-835), John Clare, Thomas Campion, Robert Louis Stevenson, Roger McGough, William Morris, Samuel Taylor, Ogden Nash, Christina Rossetti, Sir Walter Scott, and Robert Burns. Roger McGough, who reads his own works, ends the collection with The Fight of the Year in which Winter and Spring spar for supremacy, and we know who will be the winner in the end. Like so many of us in North America, I watched in awe as a total lunar eclipse on a clear winter night coincided with the winter solstice this year. As this rare event, which last happened in 1638, unfolded, Lu T’ung’s poem, The Eclipse of the Moon, kept running through my mind. I won’t quote the whole poem, but here are the lines that describe the start of the event:

. . . But this night, the fifteenth of the eighth month,

For now we saw a strange thing;

There was something eating it way inside the rim.

The rim was as though a strong man hacked off pieces with an axe,

The cassia was like a snowy peak dragged and tumbled by the wind.

The mirror refined a hundredfold

Till it shone right through the gall

The pearl of the fiery dragon

Which flew up out of its brain

Went back into the oyster’s womb.

Ring and disc crumbled as I watched,

Rubbing out in an instant the last tracks,

And then it seemed that for thousands of ages the sky would never open.

Who would guess that a thing so magical

Could be so discomfited?

disputing which could shine the brightest . . .

Just to hear James Barraclough, a volunteer reader for the Kensington and Chelsea Talking Newspapers in London, read this poem, makes one relive the event over and over again. Perhaps, one hopes, when next the winter solstice and a total lunar eclipse coincide in 2094, this time visible only in the southern hemisphere, someone will still recall Lu T’ung’s poem. Let me close this review written about one of the loveliest of poetry audio books I have so far been able to enjoy with Edward Thomas’ poem:

In the gloom of whiteness,

In the great silence of snow,

A child was sighing: “Oh,

They have killed a white bird up there in her nest,

the down fluttering from her breast!”

And still it fell through that dusky brightness

On the child crying for the bird of the snow

While some long for spring, it is still winter, and one way to enjoy it is to listen to Poetry for the Winter Season, a Naxos poetry audiobook. The 2-CD set offers poems read beautifully by amateurs, which are mostly by English-language poets, but also include some well translated early Chinese poems. All paint vivid images of winter in its many moods. Divided into eight categories, this Winter Season set is the final in a series created by Naxos and selected by Christina Hardyment, audio book reviewer for the Times, following a 2005 poetry reading competition.