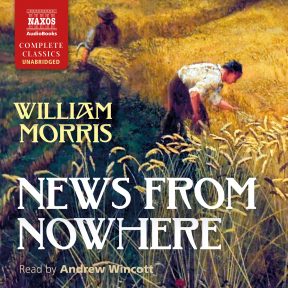 In its strictest sense, ‘Utopia’ signifies an ideal society. The word itself (derived from the Greek words ‘ou’ and ‘topos’, meaning ‘no place’ or ‘nowhere’) was coined by Thomas More in his 1516 work as the name of a fictional island which possessed the characteristics of an ideal society. In some respects, the work was a criticism, albeit an implied one, of aspects of the society of his day. Several examples of literature describing alternative ideal societies followed, notably Voltaire’s Candide and Francis Bacon’s New Atlantis.

William Morris’s News from Nowhere is firmly planted in this Utopian tradition. It outlines an ideal socialist society, albeit in the distant future, in which few demands are made of its population. It reflects Morris’s vision of the society of the future occurring ‘when the words poor and rich… will have lost their own meaning’. As in Utopia, goods have to be in public ownership in order to achieve an egalitarian society. An ethos of concern for others and society at large, rather than self-interest, is only possible in a socialist commonwealth. The book can be seen as Morris’s contribution, even intervention, in the dispute between the different socialist factions of his own day.

There can be no doubt that Morris was much influenced by Edward Bellamy’s Looking Backward, another utopian novel, which preceded News from Nowhere by two years. The two works have several obvious similarities. Most obviously, they both outline a futuristic ideal society. In both cases, the main character is a visitor from another age: Bellamy’s Julian West and Morris’s William Guest.

In Looking Backward, West finds a world in which poverty has been eradicated, and he finds personal happiness with the great-granddaughter of his long-deceased fiancée. Although the book’s popularity has, to an extent, lapsed, it was the second-most popular novel in 19th-century America. Morris certainly read Bellamy’s novel – in May 1899 he even lectured on it (to the Hammersmith Branch of the Socialist League), and he reviewed it, though not completely uncritically, in the following month. Little more than six months later, News from Nowhere started to appear in serialised form.

When comparing the fictional societies in these two books, there are clear differences. For example, in Looking Backward, work is seen as a necessary evil, while Morris is concerned not to minimise labour, but to eliminate the ‘pain’ of labour, suggesting that it is human nature for man to ‘take pleasure in his work under certain conditions’. In Bellamy, labour is handled by machinery, often described in some detail – while in Morris, men enjoy work such as road-mending, and over-mechanisation is seen as undesirable as it reduces men to unskilled workers.

Art is another area in which there are contrasting approaches. In Bellamy’s world, art plays a marginal role – classical music is relayed via telephone, and paintings appear on public buildings. In News from Nowhere, Morris gives a broad definition of art to include anything that is ‘made by man and has form’, and detailed descriptions of man-made objects often appear in the book.

At the end of News from Nowhere, William Guest returns to his own time, finding himself back in ‘dingy Hammersmith’, albeit with enthusiasm to build something better than that which awaits him there. Echoing the end of More’s Utopia, the book concludes with a hope that the society Guest has experienced may be seen as a ‘vision rather than a dream’. Although both books were written over a century ago, both deal with several themes that are still very pertinent to today’s world. And we have now made both available on audiobook, and in compelling readings – by Andrew Wincott in News from Nowhere and Adam Sims in Looking Backward.