Virginia Woolf and The Voyage Out 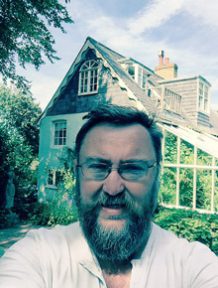 Anthony Anderson at Monk’s House, home of the Woolfs from 1919

On the evening of 30 March this year, viewers of the BBC’s current affairs programme Newsnight would have seen a reading of the following letter by Virginia Woolf, as part of the ‘Letters Live’ week:

I feel certain that I am going mad again. I feel we can’t go through another of those terrible times. And I shan’t recover this time. I begin to hear voices, and I can’t concentrate. So I am doing what seems the best thing to do. You have given me the greatest possible happiness. You have been in every way all that anyone could be. I don’t think two people could have been happier till this terrible disease came. I can’t fight any longer. I know that I am spoiling your life, that without me you could work. And you will I know. You see I can’t even write this properly. I can’t read. What I want to say is I owe all the happiness of my life to you. You have been entirely patient with me and incredibly good. I want to say that — everybody knows it. If anybody could have saved me it would have been you. Everything has gone from me but the certainty of your goodness. I can’t go on spoiling your life any longer.

I don’t think two people could have been happier than we have been.

The letter was found by Virginia Woolf’s husband, Leonard, on 28 March 1941, the day on which she successfully committed suicide. And the reader on that television broadcast was Juliet Stevenson, whose rendition – barely lasting 90 seconds – was imbued with a deep poignancy, reminding us how powerful words can be when read out loud (even where that may not have been the author’s original intention).

Juliet Stevenson has, to splendid effect, read many of Virginia Woolf’s words out loud for Naxos AudioBooks – unabridged versions of Mrs Dalloway, Jacob’s Room, To the Lighthouse and Night and Day precede her newly released audiobook of Woolf’s first novel, published 100 years ago, The Voyage Out.

In general, the reception of the book’s publication was good and amongst its admirers was E.M. Forster, who wrote some years later: ‘It is a strange, tragic, inspired book whose scene is a South America not found on any map and reached by a boat which would not float on any seas, an America whose spiritual boundaries touch Xanadu and Atlantis.’

Evident in the novel is the stream-of-consciousness style that characterises Woolf’s later writing. There are also several themes that are prominent in her later work… most obviously, relationships and marriage, particularly whether a woman can really be fulfilled within that institution. There are several marriages depicted in the book. Clarissa Dalloway seems slavishly devoted to her husband and, although more balanced, Helen Ambrose’s role is one of subservience to hers. And yet there is a note of optimism as the relationship between Rachel Vinrace and Terence Hewet promises more, although it is destined not to be realised.

The impermanence of life is a theme that seems particularly germane to Woolf. It is raised early in the novel when it strikes Rachel: ‘And life, what was that? It was only a light passing over the surface and vanishing, as in time, she would vanish, though the furniture in the room would remain.’ And it is within that overall context that the novel’s chief themes are set, perhaps softening the outcome that Forster found so tragic.