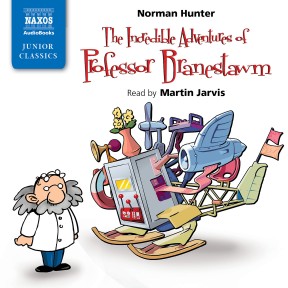 The Incredible Adventures of Professor Branestawm

Eccentric, absent-minded inventor Professor Branestawm embarks on a series of adventures with his friend Colonel Dedshott. Various machines are invented: a time travel-machine, a device to capture and tie up burglars, and a spring-cleaning machine. Inevitably, something goes wrong and Professor Branestawm is again in a pickle, exasperating his housekeeper Mrs Flittersnoop and delighting us. 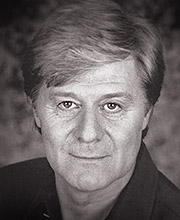 Martin Jarvis starred as Jeeves in By Jeeves on Broadway in 2001. His films include the Oscar-winning Titanic and Mrs Caldicot’s Cabbage War. Countless television appearances in Britain and America include The Inspector Lynley Mysteries, Lorna Doone, A Touch of Frost, Murder She Wrote, Space, Inspector Morse and David Copperfield. He is, uniquely, recipient of the British Talkie award and the U. S. Audie award. His continuing series of BBC Just William recordings are audio classics. He received the OBE in 2000 for his services to drama. He has also read The Wind in the Willows, Metamorphosis, and Three Men in a Boat for Naxos AudioBooks. 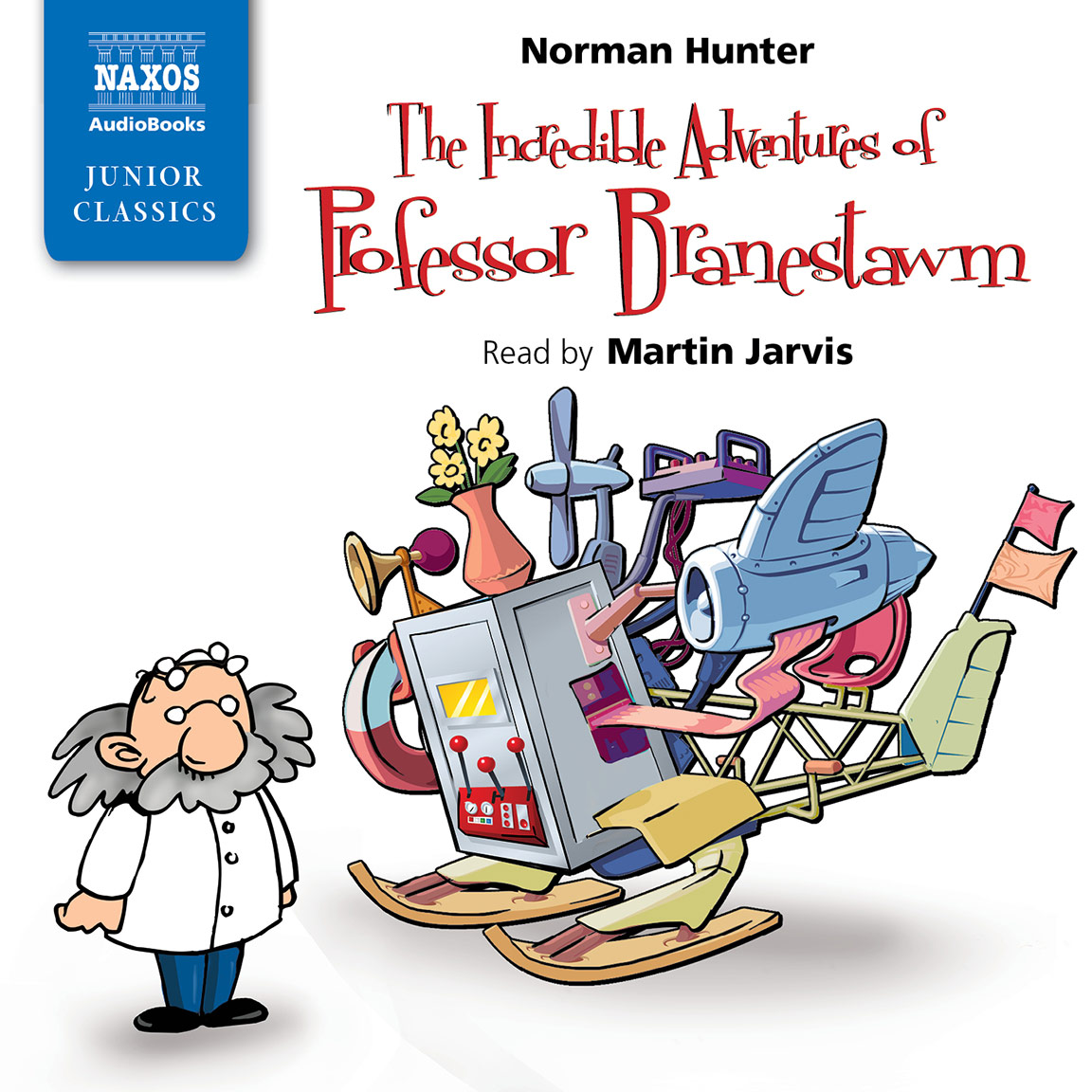 Martin [Jarvis] also reads The Incredible Adventures of Professor Branestawm by Norman Hunter. Unbelievably, these tales were first published in 1933 – and sound as if they’d been written today. Branestawm is the epitome of the mad professor, inventing a machine that gets you where you want to go before you’ve even left, a spring cleaning machine that doesn’t quite work as intended, and all sorts of other things that will have 7–11-year-olds hugging themselves with glee. Beautifully appropriate music, a Naxos signature, adds to the pleasure.

He lives in his own world of inventions, adventures, unexpected occurrences and plans that go very wrong indeed. He spends much of his time, when not adventuring, in his workshop, where his housekeeper Mrs Flittersnoop knows he is busy inventing. His only real friend is Colonel Dedshott of the Catapult Cavaliers, ‘a very brave gentleman who never missed a train, an enemy or an opportunity of getting into danger’.

The first volume was famously illustrated by W. Heath Robinson, who created the classic image of the Professor with his shiny bald head bedecked with glasses. He was often surrounded by inventions of all kinds made with strings and pulleys which you could see were bound to go badly wrong. And soon there were other books about the absent-minded professor: a do-it-yourself handbook, a ‘compendium of conundrums, riddles, puzzles, brain twiddlers and dotty descriptions’; there was even a television series. In fact, Professor Branestawm first appeared in the world (even before the books) on the ‘wireless’, as radio was called in the 1930s, with the stories read and transmitted over the airwaves in the early days of radio.

Norman Hunter, the creator of Professor Branestawm, was an advertising copywriter by profession, but he was always drawn to the world of entertainment. He was a stage magician and he drew on his skills as a prestidigitator for his first book: Simplified conjuring for all: a collection of new tricks needing no special skill or apparatus for their performance with suitable patter was published in 1923. A second book of tricks came out two years later, and more followed: conjuring was a very important part of his life.

During World War Two he lived on a boat on the Thames, and after the war, in 1949, he went to live in South Africa where he continued to work in advertising. His retirement in 1970 prompted a move back to London and he returned to his beloved character of Professor Branestawm, who was enjoying renewed popularity through a television series. Hunter picked up his pen with fresh energy (though he was now in his 70s): he produced one and sometimes even two new collections a year for an eager public. He was 83 when his last book, Professor Branestawm’s Hair-Raising Idea, was published by Bodley Head. He died in 1995, at the age of 95.

It was particularly appropriate that The Incredible Adventures of Professor Branestawm should be read by Martin Jarvis. The distinguished English actor is particularly known for his inimitable portrayal of English characters, from Just William to P.G. Wodehouse’s novels of Jeeves and Bertie Wooster. He jumped at the chance to read The Incredible Adventures of Professor Branestawm, not only because he loves the books and knows them from childhood, but also because he had a personal link with Norman Hunter, as he explains:

It was a privilege to be invited to record this book. I grew up with the idea of Norman Hunter in my mind because he published a lot of books on magic and like many boys aged nine and ten I had a collection of conjuring books, including Successful Conjuring for Amateurs (1951). It was a fantastic book with all kinds of secrets such as slate magic and cabinet magic, the Chinese linking rings, close-up magic and card magic. Actually, you could imagine that some of the explanations for these tricks were written not by Norman but by his alter ego Professor Branestawm.

I had no idea that when I was pioneering some of the Jackanory stories on television I would have the chance to meet Norman Hunter, but I did. I met him and his wife Sylvia in the late 1960s or early 1970s, when a number of contributors to Jackanory were having lunch together and I was fortunate to sit next to Norman. I was able to tell him how I enjoyed those conjuring books of his and how much they meant to me.

It was a wonderful thing for him to say, but I had to admit that I didn’t do conjuring anymore. It would have been extremely interesting to have seen some of his tricks which weren’t in his books, such as how the Indian Moon actually worked; but I didn’t think it was fair to take on this wonderful collection, and that it was better to find someone who would carry on the tradition of performing with these amazing magic tricks. So I didn’t take them, but I do remember his generosity.

When Naxos AudioBooks approached Norman Hunter’s daughter, Mary Grosch, for permission to record The Incredible Adventures, she particularly asked for Martin to read them. The resultant recording, we hope, will become as much a classic as Professor Branestawm himself.