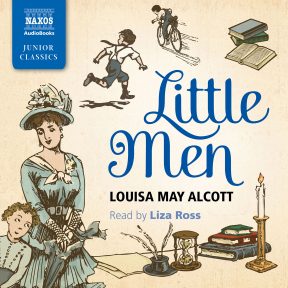 The March sisters are among the most beloved characters in children’s literature, and Little Men picks up the story of fiery, headstrong Jo where Good Wives left off. Intelligent, funny, perceptive and genuinely touching, the novel is set at a rather unusual boarding school run by Jo and her husband, where the pupils are encouraged to pillow fight and keep pets. When the penniless but talented orphan Nat Blake shows up on her doorstep, Jo takes him in, and his arrival sets in motion a chain of events that will affect all their lives.

The characters Louisa May Alcott created in Little Women have proved enduringly popular, featuring in countless films, television adaptations and even a Japanese anime series. Little Men takes one of Alcott’s most beloved creations – Jo March, the most strong-willed and imaginative of the sisters – and picks up her story from where it left off at the end of Good Wives. She has married Friedrich Bhaer, a professor of German, and together they have founded a school for boys, called Plumfield, in the house left to Jo by Aunt March. The narrative is primarily told, however, from the perspective of a 12-year-old orphan called Nat Blake. A talented musician, the shy and introverted Nat initially has a hard time adjusting to life at school, but is eventually welcomed into the Plumfield family.

Plumfield is no ordinary establishment: it’s ‘the nicest place in the world’. Instead of rigid discipline and bullying in the vein of Tom Brown’s Schooldays – published just 14 years earlier –  or Dickens’s Dotheboys Hall, the teachers at Plumfield encourage students to develop as individuals, treating them with kindness and allowing them a certain level of freedom. ‘A holiday isn’t a holiday without plenty of freedom and fun; and they shall have full swing once a week,’ as Jo says, which is why ‘banister-sliding, pillow-fights, and all manner of jovial games [are] allowed under the once decorous roof’. In keeping with the general ethos, the students are given plants and animals of their own to care for: Nat is astonished to discover that they’re allowed to keep a ‘menagerie’ in the garden, which includes rabbits, white mice, dogs and even a selection of lovingly dug-up worms.

Although it is now more than 140 years old, Little Men still entertains and inspires

The children are also encouraged to show initiative. They run their own small businesses, selling things to each other and to the school. At first, Nat feels alienated from this micro-economy, but another pupil, Tommy, explains how it works: ‘Look here, I’ll tell you what I’ll do. If you will hunt eggs for me I’ll give you one egg out of every dozen. You keep account, and when you’ve had twelve, Mother Bhaer will give you twenty-five cents for ’em, and then you can buy what you like, don’t you see?’ Nat – an outsider, sickly, penniless, initially taken on as a charity case – shares the reader’s bemusement at the idiosyncratic school, and we explore it through his eyes. At first he can’t tell ‘whether Mother Bhaer was a trifle crazy, or the most delightful woman he had ever met’, but he gradually recovers his strength and finds himself more at home.

Once Nat has settled in at Plumfield, a new character is introduced – Dan, a friend of Nat’s. Dan, however, is sullen and aggressive, and upsets the delicate balance at the school. He gets the other boys involved in fights, and introduces them to drinking, smoking, swearing and card-playing. He does try to fit in, and the Bhaers make an effort to help him, but he keeps lapsing back into old patterns. After the pupils experiment with smoking a cigar, they accidentally set fire to the house and one of them, Tommy, is seriously injured. Dan is sent away and eventually runs off. He returns a year later, having evidently learned his lesson.

Although Nat is accepted by the other boys, he does have a tendency to lie (‘not very black ones, and often the mildest of white fibs’), and the central conflict of the book focuses on an accusation of stealing. Tommy has saved up a dollar from selling eggs, and shows it to Nat. He then hides it in the barn, but the next morning it has disappeared. The other boys turn on Nat, accusing him of being the thief, and even Mr Bhaer believes he’s guilty. Dan, however, remains loyal, and protects him. Eventually suspicion turns on him, too, and life becomes increasingly difficult for the two boys until another one of the students – Jack, a sly young man the others previously nicknamed ‘Skinflint’ – confesses. Jack runs off home, but is soon returned to Plumfield. The other students are angry with him, but eventually things return to normal.

In many ways it’s not surprising that Plumfield is so unusual. Louisa May Alcott’s (1832–1888) own upbringing, by transcendentalist parents in New England, was hardly typical. Such famous intellectuals as Ralph Waldo Emerson, Henry David Thoreau and Margaret Fuller were frequent visitors to the Alcott household, and when she was two years old her father – an unconventional and strong-willed man who was a feminist, abolitionist and vegan – founded an experimental school. It didn’t last, however, and the family moved several times, including a period spent at an agrarian commune called Fruitlands, founded along transcendentalist lines.

Little Men, with its gentle lesson that no one is irredeemable, no mistake is unforgivable, and that kindness always wins out in the end, is clearly influenced by the transcendentalist, utopian philosophy Alcott’s parents held so dear: transcendentalists were convinced of the perfectibility of human beings, believing that traditional social structures were corrosive and placing significant emphasis on individualism and self-reliance, just as the Bhaers do in the novel. Indeed the connection – and the fundamentally innovative, reformatory spirit of the book – were not lost on contemporary reviewers.

The Alcott family had little money, and Louisa had to work at a number of menial jobs. She began writing professionally in the 1860s, however, and her renown grew steadily. The novels she initially published (under a pseudonym) are little read today, and don’t seem to fit with our image of Alcott as – as Henry James put it in a review dated October 1875 – ‘the novelist of children – the Thackeray, the Trollope, of the nursery and the schoolroom’. Her early novels for adults, mainly Gothic thrillers and romances, proved less popular than her works for young people. Little Men, published in 1871, was extremely well received, not just as a children’s book but as a perceptive study of human nature: ‘[Little Men] is one of the jolliest and most wholesome stories we ever read. The ideas advanced in it about the government and education of children deserve to be read by every parent and teacher, nine-tenths of whom can learn much about boy-nature from its delightful pages’ (The Literary World, 1 June 1871). Some reviewers even claimed it was better than its predecessors, with one (writing in Scribner’s Monthly) enthusing, ‘Charming as was Little Women, Little Men is in many ways better. Artistically, it is done with a more even hand; morally, it has a distincter and surer aim.’

History has tended to disagree with this assessment, and Little Women is certainly Alcott’s most famous novel. However, Little Men does possess many of the characteristics that has made the story of the March sisters so beloved. It is intelligent, funny, often perceptive and – despite its occasional moralising – genuinely touching. Although it is now more than 140 years old, Little Men still entertains and inspires new generations of children, and its characters remain as vivid and memorable as ever. ‘The delightful historian of the little folk’, as one contemporary dubbed Alcott, continues to delight today.