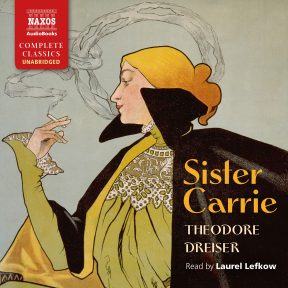 A magnificent portrayal of 1890s America and the harsh realities of a dog-eat-dog world, Sister Carrie lies at the forefront of American Naturalism. When poor young provincial woman Carrie Meeber arrives in Chicago, she little expects to be catapulted from lower-class woman to prominent Broadway actress. Passive and yielding, she lets circumstances coerce her into action and by good fortune she arrives at fame. It is in Chicago that Carrie meets a successful businessman, Hurstwood, who helps her establish her name. Gripped by a strong attraction to Carrie, Hurstwood ends his marriage and moves with her to New York. Their relationship soon ends and, like a fish out of water, Hurstwood finds himself vagrant and destitute on the streets of an unfamiliar city, a poignant counterpoint to Carrie’s rapid rise. Frank, evocative and compelling, Sister Carrie gives us a version of the American dream with a gritty and unattractive reality.

Laurel Lefkow is an accomplished stage, television and radio actress. She has won awards for a number of her audio books and was nominated for best supporting actress for her performance in A Shayna Maidel in London’s West End. Other theatre roles include Alison in Look Back in Anger, Irina in The Three Sisters and Rose in Slow dance on the Killing Ground. Her television and film credits include In Suspicious Circumstances, The Tracey Ullman Show, Spy Game, Inside the Twin Towers and A Perfect Family. She was born in Washington D C and grew up in India, Kenya and France where her father worked as an American Diplomat. She trained at the Webber Douglas Academy in London. Laurel also has an extensive and successful career as a voice-over artist in many well known cartoons and advertising campaigns. She has also read Pollyanna and What Katy Did for Naxos AudioBooks.

Laurel Lefkow gives an elegantly understated narration of Dreiser’s timeless novel of ambition, pride and social class. Lefkow’s pacing adeptly mirrors Carrie’s tentative exploration of city life. Dreiser’s exquisitely rendered details of every strata of social class will resonate with the economic realities of today’s world. Lefkow’s subtle shifts in vocal inflection and pitch give full voice to the characters, who range from Carrie’s solemn sister, Minnie, and the genial but vain Charles Drouet to the sophisticated but ultimately dejected George Hurstwood and the fun-loving showgirl, Lola. At the close of this panoramic novel, the listener may ponder how sympathetic a character Carrie has become. A story to be savoured and treasured.