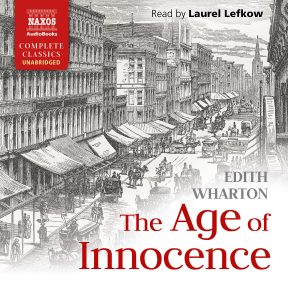 The Age of Innocence

‘The real loneliness is living among all these kind people who only ask one to pretend!’ Awarded the 1921 Pulitzer Prize (the first to be presented to a woman), Edith Wharton’s The Age of Innocence is a powerful depiction of love and desire in New York’s glamorous Gilded Age. When Newland Archer, happily engaged to May Welland, meets his  fiancée’s cousin Ellen, his entire future is cast into doubt: strong-willed, witty, and entirely unpretentious, Ellen is unlike any woman he has ever met. He is torn between his infatuation for her and his duty to marry May. In subtle and elegant language, Wharton delivers a critical look at the social mores of the time.

Laurel Lefkow is an accomplished stage, television and radio actress. She has won awards for a number of her audio books and was nominated for best supporting actress for her performance in A Shayna Maidel in London’s West End. Other theatre roles include Alison in Look Back in Anger, Irina in The Three Sisters and Rose in Slow dance on the Killing Ground. Her television and film credits include In Suspicious Circumstances, The Tracey Ullman Show, Spy Game, Inside the Twin Towers and A Perfect Family. She was born in Washington D C and grew up in India, Kenya and France where her father worked as an American Diplomat. She trained at the Webber Douglas Academy in London. Laurel also has an extensive and successful career as a voice-over artist in many well known cartoons and advertising campaigns. She has also read Pollyanna and What Katy Did for Naxos AudioBooks.

Edith Wharton was looking back to her own innocence when in 1920, in her late fifties, she wrote The Age of Innocence, a story of the cracks that were beginning to appear in old-fashioned fin de siècle New York society. Newland Archer is about to be married when his fiancée’s cousin returns to New York, in search of a divorce from her abusive Polish husband, and his complacent, sedate world rocks on its pedestal. In the best Brief Encounter tradition, the lovers fight their feelings, little realising that their passion is well-understood by their nearest and dearest. It won the Pulitzer prize for fiction, the first awarded to a woman author, and it still has a haunting ‘road not taken’ quality that leaves the listener musing on might-have-beens. Laurel Lefkow, who can sound marvellously raunchy reading such titles as The Devil Wears Prada, adopts a precise well-behaved diction perfectly matched to the novel.

Narrator Lauren Lefkow brings a calm and dignified tone to Edith Wharton’s high-society classic. It’s a novel full of wry comic observations on the social restraints that bind the upper echelon of New York City society, especially its female members. Lefkow contributes a fitting sense of intelligent restraint without sacrificing the warmth and versatility necessary to keep the listener engaged and entertained. Wharton’s strongest asset is her sparkling wit, which proves consistently ironic and fatalistic, and Lefkow seldom misses a beat, ensuring that a character’s twinkling eye or raised eyebrow is available to the attentive listener. Though her character range is understated, a shortcoming noticeable only in scenes with multiple characters, Lefkow’s sensitivity to character gives a constant lift to an insightful classic.