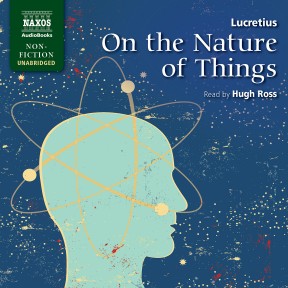 On the Nature of Things

Lucretius was born in 99 BC, and On the Nature of Things is his only surviving work. His aim was to free the Roman world from its two great terrors – the gods and death. Lucretius argues that the gods are not actively involved in life, so need not be appeased; and that death is the end of everything human – body and soul – and therefore should not be feared. But On the Nature of Things is also a poem of striking imagery, intimate natural observation and touching pathos. It is one of the most influential writings in Western thought. 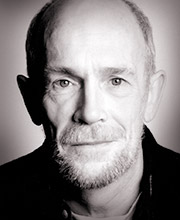 Hugh Ross trained at the Royal Academy of Dramatic Art, and has worked extensively in theatre, film and television. Theatre credits include The Woman in Black at the Fortune Theatre, A Prayer for Owen Meany at the Royal National Theatre, and Bent at Trafalgar Studios. He has acted in Charlotte Grey and Trainspotting, among other films. His television work includes Sea of Souls, Lovejoy and Absolutely Fabulous for the BBC. Hugh is also active as a director, with credits including After Liverpool with The Royal Shakespeare Company. He has also read Aristotle: An Introduction for Naxos AudioBooks.

Titles by Lucretius
On the Nature of Things (unabridged)

The Roman Lucretius was a follower of Epicurus, who taught that knowledge, fraternity, and the practice of virtue lead to the greatest pleasures in life – tranquility and security. Lucretius set forth his interpretation of this philosophy in his only known writing, De Rerum Natura, or On the Nature of Things. It seems modern in its materialism, disdain of superstition, and trust in science, but remote in its phrasing and versification – for it is not only a treatise but a poem. Narrator Hugh Ross goes to great lengths to bring his considerable expressive power to bear on the meaning of the lines but falls short on the poetry. The graceless translation by Canadian scholar Ian Johnston does not help.

In this first-century BCE epic poem, Roman poet/philosopher Lucretius explores the doctrines of Epicurean philosophy, systematically teaching how the universe is not the creation of a supreme being but can instead be explained by natural laws. He also anticipates several modern ideas, as in his theory of atomism, a belief in the existence of atoms that produce the materials we see around us. Ian Johnston, who produced a new verse translation for this recording, captures the poetic force of the original without sacrificing clarity, while narrator Hugh Ross (Aristotle: An Introduction) delivers a clear and lively performance. Though some listeners may have difficulty with the scientific explanations, this audio offers a poetic and persuasive rendition of a philosophical classic and is recommended for academic and large public libraries.

We know little about Titus Lucretius Carus (c. 99 to c. 55 BC) except that he was a Roman poet and author of De Rerum Natura (‘On the Nature of Things’), a work which he appears to have completed but failed to revise or fully prepare for the reader. We assume from the words of the poem itself that Lucretius was a friend of Memmius, a prominent Roman political figure to whom the work is addressed. Other than that we know virtually nothing about him, other than a scurrilous story circulated hundreds of years after his death that he was driven mad by a love potion, created his poem in lucid intervals, and then killed himself.

On the Nature of Things is a long celebration of the philosophy of Epicurus, a view of life which claims that all natural phenomena are to be understood in terms of the movements and combinations of material atoms. From this it flows that gods play no role in natural events or human affairs and have nothing to do with creating or sustaining the world, that the immortality of the soul is a myth fabricated by traditional religions for their own absurd and cruel purposes, and that the highest goal of life is the avoidance of unnecessary pain and the pursuit of appropriate pleasure, especially through contemplation. The poem is thus a long,
impassioned plea for what we would now call classical humanism.

Most of On the Nature of Things is taken up with a wide-ranging materialist explanation for natural phenomena based on atomic theory, aimed at helping us understand how the world works without reference to divine planning or intervention. We can then accept how, like all other things, human beings, including our minds and souls, are made up of elements which combined when we were born and which will dissolve back into particles when we die – as will the earth and our cosmos eventually. The notions of the immortality of the soul and of an afterlife of rewards and punishments are therefore specious. The gods do exist, and we can learn to contemplate them, but they are supremely uninterested in human beings and do not interfere at all in earthly matters.

Lucretius offers us a vision of the world rather different from the one our scientific traditions present. His world is in constant motion, driven by the mechanical forces of production and dissolution, and intensely vital. At the heart of it lies the random swerve (clinamen) of basic particles (atoms), so that there is nothing deterministic about why things occur the way they do. Nature has its regular phenomena, of course, but at the heart of it lie unpredictable motions. These can make our existence precarious and short-lived. But nature is also intensely beautiful, awe-inspiring, and worthy of contemplation. Lucretius argues that we should have the courage to accept this condition and reorientate our lives so that we are not misled by false ambitions, unnecessary fears, and superstitions.

Interesting as Lucretius’ vision of nature is, in many respects it offers few specific contributions to modern scientific knowledge and, for that reason, is generally ignored in histories of science. He is at his best when he is refuting some of the theories of other materialists and when he is arguing for the existence of atoms and their properties. These account for the ways in which a limited number of atomic shapes can produce the variety in materials we see all around us and also explain their variations in colour, smell, and other sensations. From the point of view of modern science, one of the most telling deficiencies in Lucretius is his lack of interest in universally binding theoretical explanations for natural phenomena. Having focused on a particular perception, he will then offer a list of alternative, often very ingenious theories. All those which might conceivably happen in a materialistic universe are acceptable, provided they are not contradicted by our senses; and there is no use, according to Lucretius, trying to sort out one possible theory from another.

However grave the weaknesses in Lucretius’ scientific theories, what really matters here is the eloquence of his plea for a materialistic understanding of the world and of human life. The poem is, first and foremost, driven by an urgent ethical concern that human beings accept a materialistic understanding of themselves, so that they can live better lives, free from the fears of traditional religion and the false values of political ambitions. And the enormous influence of the work stems from the emotional quality of that plea. Hence, while Lucretius may not rank among those who have contributed important theories to science, he ranks in the forefront of those who have encouraged later thinkers to adopt a materialistic vision of the world and to base their lives on the values of classical humanism.

The Latin text of Lucretius was first published as a printed book around 1473, and the first English translation appeared in the mid-17th century. Since the first appearance of the Latin text in print, the list of those who have acknowledged Lucretius as an important influence reads like a ‘Who’s Who’ of Western culture. It includes, as one might expect, those who welcome the poet’s attacks on organised religion and his endorsement of reason and sense experience in pursuit of a life of moderate pleasure. But it also includes some pious Catholics, who seem to have experienced little difficulty with the anti-religious sentiments in the poem; leading Romantic poets; and a slew of 19th-century figures. Thomas Jefferson, it seems, owned eight copies of On the Nature of Things, declared himself a firm disciple of Epicurus, and may have derived that phrase ‘pursuit of happiness’, at least in part, from his reading of Lucretius. The poem’s influence can be linked to a range of 20th-century poets and philosophers. So pervasive has its presence been in the intellectual climate that for one critic at least (Stuart Gillespie), Charles Darwin’s claim that he had not read Lucretius is rather like Milton’s claiming that he had not read Genesis.