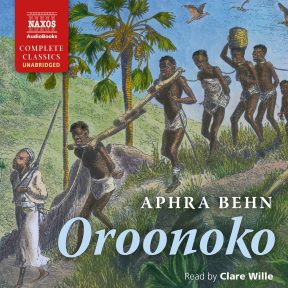 A vivid love story and adventure tale, Oroonoko is a heroic slave narrative about a royal prince and his  fight for freedom. The eponymous hero, Oroonoko, deemed royalty in one world and slave in another, is torn from his noble status and betrayed into slavery in Surinam, where he is reduced to chains, fetters and shackles. But his high spirit and admirable character will not be suppressed… The book was groundbreaking at the time and is considered to be one of the first novels written in English (by one of the first English women to earn her living by writing). Its condemnation of slavery and Europeans, and striking portrayal of sexuality and violence, shrouded Behn’s name in controversy for years after it was published.

Clare Wille’s performance may help listeners appreciate Behn’s tragic romance despite the story’s 17th-century prose. It features the star-crossed love of a noble (and highly emotional) African king who is tricked into slavery. Wille’s pace can be a touch quick, but she aids understanding through her clarity of enunciation and her astute interpretations of emotion, expression, and emphasis. There is some staginess in her reading, but it fits the audiobook’s melodramatic tone; in particular, her cultured-sounding English accent fits the book’s high rhetorical style. She doesn’t overdo it, a choice that helps the text to seem merely ornate and high-flown rather than purple and overwrought. While not for every taste, Oroonoko is a notable piece, and Wille does a fine job of presenting it at its best.