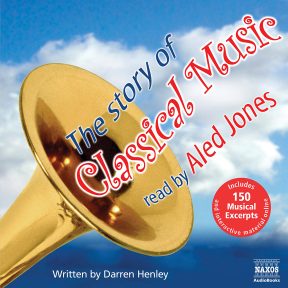 The Story of Classical Music

The lives and music of the great composers of classical music unfold in this entertaining account, introduced by singer and presenter Aled Jones. In 1200 years, classical music grew from the chanting of medieval monks through the symphonies of Beethoven and the grand operas of Wagner to the huge orchestral sound-world of the 21st century, with its electronics and its film music. In his easy-going style, Aled Jones paints vivid portraits of over 80 composers, each one illustrated with some of his, or her, most famous music.

This all-encompassing introduction to classical music also includes a wealth of biographical and instrumental information online: to find pictures, articles, sheet music, quizzes and more, visit n-ab.com/socm and enter the password given on page 2 of the accompanying booklet. 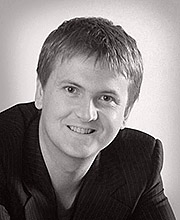 Aled Jones is the presenter of the Sunday breakfast show on Classic FM and Sunday morning interview programme on BBC Radio Wales. On television, he is one of the main presenters of BBC One’s Songs of Praise and also hosts the BBC One Wales arts programme On Show. As a boy soprano, he sold more than six million records worldwide. In 2002, he returned to performing, this time as a baritone. His albums Aled and Higher have each sold more than 300,000 copies and his most recent album is New Horizons. His other recordings for Naxos Audiobooks include The Story of Classical Music.

I’m not sure what age child this Junior Classic audio is aimed at. The incidental sound effects, squishy slicing noises when Charles I is beheaded, suggests pretty young. If so, I’m impressed that it includes so much serious music, not just Classic FM chestnuts. The message is clear. Catch them young and, it goes without saying, make them practise.

Music does survive in another way: the oral tradition, where tunes are handed down personally from musician to musician, taught by listening and copying. This is used for folk music, which can survive very accurately, as well as be refreshed by every generation. However, it generally works only for music that involves just one or two parts. After that, it gets too complicated to remember. When you have a piece involving about ten or more parts, the only way to make it last is to write it down. That is why musical notation became so important.

As we learn on this recording, notation began in the eighth century for music sung in churches. It has developed a lot since then to include different instruments, different keys, and to show more accurately things like the length of notes, the speed, whether it’s loud or soft… even silence can be notated: you just write lots of rests instead of notes!

Notation made it possible for the music of great composers to survive: the music of Johann Sebastian Bach, Wolfgang Amadeus Mozart and Ludwig van Beethoven lives on today because of notation. Of course, it is not just the paper and the notes that made sure their music survived: it had to be good! Everyone knew, when Mozart was alive, that his music was especially good – well, almost everyone. When his opera The Magic Flute was first performed, the Emperor of Austria actually said to him: ‘Too many notes, Mr Mozart!’ Not the nicest thing to say to a composer immediately after a first performance! And he was wrong. The Magic Flute turned out to be a hit opera for 200 years.

New composers of today are adding to classical music all the time. Some of this will be forgotten in ten years’ time or even sooner.

Everyone knew too that Beethoven was the most important composer of his time. Of course, he really needed notation because his deafness stopped him from enjoying the music in the way we do – by just listening to it. He could look at the notes on the page and hear the music in his head.

And Bach? Well, Bach was so busy writing music and playing the organ that he didn’t have much time to think about the future of his music; but other people came to know how valuable he was. Mozart studied his music, then Mendelssohn studied his music, and, later, Bruckner did too. So did many others. Once again, it was all thanks to musical notation: all that scribbling done in Bach’s time became like gold dust.

Notation was important also for Schubert. Poor Schubert! Music poured out of him – he had melodies in his head all the time – and he wrote it down as fast as he could, anywhere, on anything. In one day alone, he wrote eight songs. But only a few friends realised at the time what a unique and talented composer he was. He heard performed a lot of the songs that he wrote and much of the chamber music, but his symphonies were never performed professionally for him – though that didn’t stop him writing nine! He simply had to compose: he had to put down on paper the sounds he heard in his head.

Schubert died just one year after Beethoven, in 1828. His friends carried on playing some of his music, but most of it was beginning to be forgotten. Then one day, Robert Schumann was browsing through a library in Vienna, looking at old manuscripts that were there, and he came across Symphony No. 9 by Franz Schubert. It was in Schubert’s own handwriting. He started to look at it (he could hear the sounds clearly in his head because he was a pianist and composer himself). He realised that there, sitting in a library box, silent and forgotten, was a masterpiece. It was exciting and full of bright tunes and rhythms that stick inside your head. He was so excited he got a copy made and sent it straight off to Felix Mendelssohn, telling him that this was such a remarkable symphony it should be played. So Mendelssohn agreed and arranged a performance. He did this for some of Bach’s pieces, too, which were being neglected.

So in this way, music that is preserved in silence on a page for years, sometimes for generations or centuries, comes alive again. It is not usually possible to play it exactly as the composer wished, because every performance of a work is slightly different. It depends on the players: some violinists, for example, play without much vibrato while others play with more; some play slightly faster or more smoothly, while others play more slowly or in a more bouncy way. This is what performance is about: making the music come alive here and now. And this is the miracle of classical music – that hundreds of years after it was written, it still can sound as fresh and lively as if it was written yesterday.

Fashion does not really come into classical music. Some music is very fashionable for a time, but then is forgotten: it is important only for the people of a particular century or year, or moment. Classical music, on the other hand, is music that has lasted through the centuries, and has been loved and played by many different generations of people. These people have worn different kinds of clothes, behaved in different ways – but still enjoyed the same classical works. Bach, Mozart and Beethoven (and others) have survived to the 21st century, so it is likely they will go on to the 22nd, 23rd, 24th centuries and beyond… with the help of musical notation.

New composers of today are adding to classical music all the time. Some of this will be forgotten in ten years’ time or even sooner. Some will not even be noticed by most people until well after the composer is dead – but then, gradually, it will come back to the concert hall, like a forgotten friend coming out of the mist.

There is so much wonderful music to discover from all the centuries, it is difficult to know where to start. Hopefully, this introduction will give you some pointers. You might hear a composer or a style and think you like that best: you can then listen and discover more. You could even play the music yourself: by playing the cello, or perhaps the clarinet or the piano, you are right in the middle of the musical experience.

Aled Jones himself knew what it was like to be in the centre of music-making when he was a young boy. As a chorister, he sang every morning, rehearsing and then performing. He had to get up early, but the musical standard was high and it was fun. He was fortunate enough to have a particularly beautiful voice and to be a born performer: he really loved big concerts and important moments. That is why he had such an extraordinary career as a young musician, selling millions of records and singing to audiences all over the world. He even sang with the famous conductor and composer Leonard Bernstein!

Now, as an adult, Aled is equally active. He is still a singer (though his voice is much lower now – somewhere between baritone and tenor) and he travels the world, performing. He is a radio and television presenter too: he introduces classical music to hundreds of thousands on the British radio station Classic FM, and introduces musical programmes on television. For him, playing, introducing and listening is all part of an active musical life. He knows that classical music is a journey that goes on for as long as you listen and play.