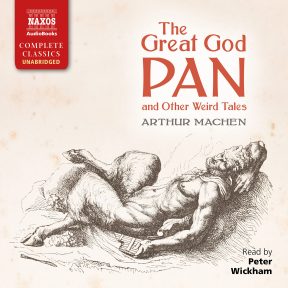 The Great God Pan and Other Weird Tales

Dubbed the greatest horror story in English by Stephen King, The Great God Pan is an eerie and otherworldly mystery about a diabolical operation and its terrifying repercussions. After rescuing a young woman from the streets of London, Dr Raymond uses her as a test subject for brain surgery aimed at ‘lifting the veil’ of reality, to see the supernatural and the ‘great god Pan’. The operation is a disaster and leaves the subject lobotomised. Years later, London becomes afflicted with a strange series of male suicides connected to a beautiful but sinister woman named Helen. Just who is she, and what is her connection to Dr Raymond’s failed experiment? First published in 1890, The Great God Pan influenced many writers of the genre, including the unrivalled master H.P. Lovecraft. It makes perfect listening for a dark and rainy evening. The collection also includes: The White People, The Green Book, The Inmost Light, The Novel of the Black Seal, The Novel of the White Powder, The Red Hand, The Shining Pyramid and A Fragment of Life.

In a comfortable, approachable style, actor Peter Wickham creates the feeling of relaxing in a 19th-century English drawing room while swapping tales of the macabre, fairy folk, and undiscovered worlds. In a tone that is equal parts beguilement and wonder, Wickham leads listeners through this late-19th-century collection of nine short stories, including the title tale and the superb White People. The works focus on Arthur Machen’s early influences: his vast knowledge of Welsh folklore, the occult, and a short stint in medical school. Long a favourite of horror meisters from H.P. Lovecraft to Stephen King, Machen was one of the primary architects of modern horror and dark fantasy. This collection is an excellent introduction to his gentle and eerie worlds.