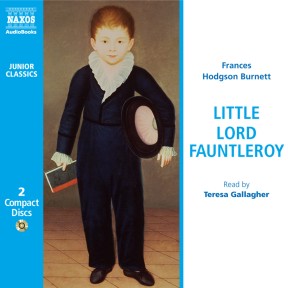 Since its first publication in 1885, Little Lord Fauntleroy has become a favourite with children. The move from New York to his ancestral castle comes as a shock to both Cedric and his new-found relatives, and while he comes to terms with aristocratic ways, they become more aware of compassion and social justice. The text is read with elegance by Teresa Gallagher, a much-admired Naxos reader, whose own childhood was divided between the US and UK.

The image of Little Lord Fauntleroy as a pampered, golden-curled boy in a ridiculous suit of velvet and lace is a travesty of the original and hugely successful 1855 story. Eight-year-old Cedric inherits riches: a castle and a title. He has to leave America where, despite his own poverty, he has befriended unfortunates, to join his old Scrooge of a grandfather in England. Of course his innate goodness and generous little heart win over the curmudgeonly old man. The unsentimental narration – and the drifts of Elgar – lift it into the realm of fable.

This meticulous abridgment does a good job with Burnett’s classic rags-to-riches story. Kindly fate transports an American boy, Cedric Errol, to England when he is discovered to be heir to the earldom of Dorincourt. Prepared to hate the American upstart, the crusty earl finds he can’t resist his grandson’s love. Teresa Gallagher’s gentle, refined voice brings the precocious Cedric into listeners’ hearts with arresting success. Equally well depicted are the pithy sayings of the ancient earl and Cedric’s mother’s bell-like tones. Characters and significant dialogue appear seamlessly, and there are few continuity issues in the abridgement. Narration and script combine to present a merry audiobook.