All Change at the Helm

Two decades ago, in 1994, Klaus Heymann and I started Naxos AudioBooks as a literary addition to the rapidly growing classical label Naxos. Its purpose was clear: to provide top-quality audiobook recordings along the theme of ‘Classic Literature with Classical Music’. But this month marks my departure. 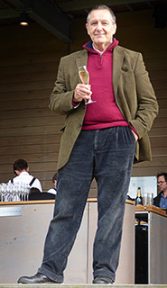 Twenty years on and we have 800 titles of classics ranging from Homer and Dante to James Joyce, Samuel Beckett and Haruki Murakami. Other statistics: 5,232 hours of audio presented by over 400 readers. In short, you could listen to Naxos AudioBooks for 218 days consecutively.

Of course, it has never been about numbers. Classic literature is, by definition, the finest because it has withstood the test of time. Generation after generation has come afresh to Jane Austen, Charles Dickens, Laurence Sterne, George Eliot, Alexandre Dumas, Victor Hugo, Arthur Conan Doyle, Marcel Proust… and been engaged, moved, entertained and intellectually enriched.

The list is as varied as it is as long, and of course continuously growing. Since we started names have been added to the genre ‘classics’, whether it is Rosemary Sutcliff or Georgette Heyer, Murakami or Cormac McCarthy, Alan Garner or Jan Morris.

So can you imagine what these last 20 years have been for me? I have revelled in the finest literature day after day and often night after night! I have said that for me it has been more of a cause than a business, a phrase that has made the personages in the vital business wing of the company – finance, sales, duplication – go pale. I have also said that to be gifted with so much fulfilling enjoyment I must have done something reasonably fair in my previous lives!

After all, it has been so unbelievably uplifting. Can you imagine what it was like right at the start when I sat in the studio and Anton Lesser – one of England’s finest classical actors with that unmistakeable, soulful voice – embarked upon Milton’s Paradise Lost:

It was the first of many great classics he has read for us: Dickens, Sterne, Homer, poetry, Hamlet – a very long list. Every one a winner. 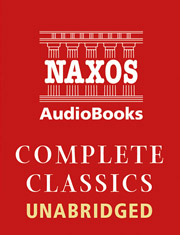 And just a few days later, Juliet Stevenson sat down on the same chair and started To The Lighthouse (the first of many great works she has read for Naxos AudioBooks, including most of Jane Austen and her incomparable reading of Middlemarch):

Even now I remember vividly the thrill that went through me sitting in the control room of the little studio in Buckinghamshire on those two separate days. And it was just a week or so afterwards that a very young Michael Sheen showed himself to be an exceptional talent as he read Crime and Punishment with a vigour and intensity that electrified the dilemma of Raskolnikov. In his case, too, it was the first of a series of important classics that he read for Naxos AudioBooks. He was part of the policy of using young actors who were new to the world of spoken word – as this format was more widely called then.

The spoken word/audiobook world was very different then. The books were abridged and were sold mainly on cassette, though we were the first audiobook label to release everything on CD as well. With the background of the rapidly expanding Naxos music label, we could draw upon the classical music catalogue and make more of an attractive production of our recordings. I felt it really helped to have chamber music from the classical period to set the scene for Austen, viol consorts for Milton, or dramatic Russian music for Dostoyevsky.

With the unstinting and patient support of Klaus Heymann, who was constantly encouraging, Naxos AudioBooks expanded rapidly, extending to junior classics, non-fiction and even expensive drama: Shakespeare, Ibsen, Wilde, Sophocles and more. And, as the music label forged ahead into adventurous territory with Boulez and Ligeti, so we went into James Joyce and Samuel Beckett.

Times and formats were changing. The growth of digital technology with ever-increasing download speeds and efficient MP3 players, and the very bold and sometimes controversial download company that became audible.co.uk/.com, unabridged audiobooks became the dominant format. So we found ourselves going back to those classics and doing them in their entirety.

A joy all over again! 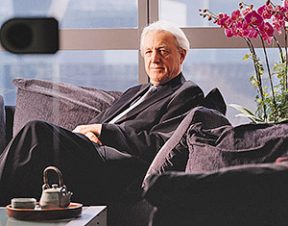 In came Juliet Stevenson and Anton Lesser; in came Neville Jason to do the entire Remembrance of Things Past (which he had already abridged and read), as well as War and Peace, The Once and Future King, and much more; David Timson had already got going on the unabridged Sherlock Holmes, so he continued until he finished – and discovered that, when put together, the stories were longer than War and Peace. With that behind him, it was on to Dickens and Gibbon’s The Decline and Fall of the Roman Empire; and, as we speak, he is finishing Spenser’s The Faerie Queene.

Our Shakespeare was always unabridged (or almost always), and it attracted the stars: Kenneth Branagh as Richard III, Paul Scofield as King Lear, Fiona Shaw directing Macbeth and playing Lady Macbeth. They were recorded (along with hundreds of books) at Motivation Sound Studios in Hampstead, an established audiobook and drama studio run under the direction of Peter Walton, with Norman Goodman as the principal engineer (he played a crucial role in many a Shakespeare production). Other Shakespeare recordings released over the years include Michael Sheen and Kate Beckinsale’s Romeo and Juliet, and The Tempest with Ian McKellen as Prospero (along with a young Benedict Cumberbatch as Ferdinand and Emilia Fox as Miranda – directed by John Tydeman).

While on Shakespeare, I must mention Chiwetel Ejiofor and Ewan McGregor who provided an electric Othello through the exceptional prism of Michael Grandage and his Donmar Theatre – abridged maybe, but you will be on the edge of your seat if you listen!

The list is very long and I could go on for pages and pages. It has been the most remarkable journey for me. I grew up with many of the classics we have recorded, of course, but to come to them again, in the hands of such vibrant talent, has been one of the most enriching experiences of my life. It has made me immensely respectful of the art of reading, and of those actors who know how to shine in the intense, concentrated environment of the audiobook studio.

Often they are not ‘stars’ in the sense of household names, but they are truly great. I have mentioned many in my monthly blogs over the years and I feel impelled to mention them again. Oh, it is difficult, and invidious, because so many I won’t mention will be upset – and rightly so. But can my final blog here go without highlighting a few with whom I worked regularly over the years: Sean Barrett, Bill Homewood, Rupert Degas, Laura Paton, Nigel Anthony, Roy McMillan, Teresa Gallagher, David Horovitch, Derek Jacobi, Liza Ross, Garrick Hagon and William Hootkins (sadly deceased, but his reading of Moby Dick is unmatched). And my son, Benjamin Soames, who, after studying at LAMDA, became a mainstay of our Junior Classics range and set me first upon the road which led to Naxos AudioBooks. A spotlight also falls upon our James Joyce team, readers Jim Norton and Marcella Riordan, and director Roger Marsh.

Every year has had its highlights for me, including 2014, my last year. Leighton Pugh has read The Diary of Samuel Pepys in the complete authoritative Latham and Matthews version – it comes out next year in three volumes (some 90 CDs). A major undertaking! My strongest personal discovery (I didn’t know it) has been George Eliot’s Adam Bede read so sensitively by Georgina Sutton. It was Eliot’s first novel; what a debut!

But after 20 years I feel I need a new challenge, and also that the label itself can do with fresh hands at the helm.

Anthony Anderson, who for many years has looked after Naxos in the UK, takes over as Managing Director of Naxos AudioBooks, with Genevieve Helsby as Publishing Manager and Samuel Howard as Publishing Executive. Arthur Jenkins, who has run this website so skilfully for so many years – it was the first independent audiobook label with its own download site, and certainly the only one offering M4B files as well as MP3 – remains in the IT seat.

I would also like to thank our principal editor, Sarah Butcher, who so ably married meticulous sound-editing skills with unerring taste in the choice of music to go with words and situations; Genevieve, who though formally managing Naxos Multimedia injected her high editorial standards into our neighbouring office; Hannah Whale, our cover and booklet designer, for her unfailingly imaginative artwork; and Sylvia Helsby for her razor-sharp proof-listening ability that ensures what you listen to is what the author wrote! Also, Anthony for steadying the ship when it threatened to capsize during a few storms and William Anderson who has run our US wing for many years with unfailing commitment.

Finally, and particularly, Klaus Heymann who never lost faith in a project we started in a 10 minute conversation after a wine-rich supper in Cannes on 23 January 1994. These things do happen.

I am sure the label will thrive with this team, who will, I hope, introduce new ideas and directions. My best wishes go to them, and I look forward to the new recordings which will emerge in the coming years.