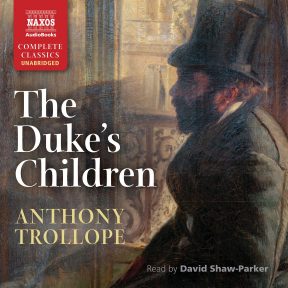 The Only Complete Edition

Bereft of his beloved wife Glencora and his role as Prime Minister, Plantagenet Palliser enters the realm of family politics as he struggles to guide and connect with his three wayward children. Lord Silverbridge, the Duke’s first born and natural inheritor, expelled from Oxford, a gambler at the racetrack and an elected Conservative, further troubles his father when he becomes engaged to Isabel Boncassen, a vibrant and witty American heiress of low social status. Lady Mary, his daughter, falls in love with a penniless young gentleman named Frank Tregear, while his second son, Gerald, displays similar behaviour to his brother. The beleaguered Duke must set aside his pride and accept their desires in order to restore happiness and harmony in the Palliser home. The Duke’s Children brings Trollope’s Palliser saga to a satisfying conclusion, and is here presented in its entirety, with over 65,000 words restored from the original manuscript by Steven Amarnick, assisted by Robert Wiseman, with Susan Humphreys.

Those who have been following narrator David Shaw-Parker’s journey through the Palliser novels have come to expect excellence, and they will not be disappointed with this concluding instalment. The Duke of Omnium is now a widower, so we miss Lady Glencora’s fine Scottish voice, but there is a new assortment of interesting characters for Shaw-Parker to bring to life. And he does so marvellously. Our old friend the Duke is now concerned with the marital plans of his two oldest children, his duty toward them and to his own heritage, and his duty to the country. This is Trollope, so we can pretty much count on a happy ending of some sort, but the trip is great fun, with a few tears along the way.