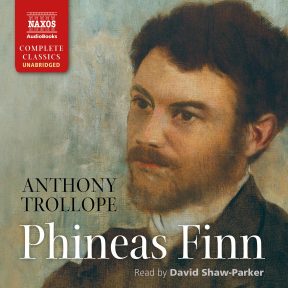 Phineas Finn, a handsome young man of 23, comes to England to make his fortune in parliamentary politics. But despite all his aspirations, Finn is haunted by ethical questions as his personal convictions conflict with his duty towards his party. Loyalty versus honour, love versus money, and privacy versus prominence: our eponymous hero faces a variety of dilemmas as he navigates his way through the House of Commons. The second installment of Trollope’s celebrated Palliser series, Phineas Finn is a delightful and humorous look at the complexity of human relationships and the politics surrounding the Second Reform Bill of the 1860s.

Naxos continues its fine unabridged releases of Anthony Trollope’s six Palliser novels with Phineas Finn, a tale of parliamentary shenanigans at the time of the Second Reform Bill. It is a comfort in our present parlous state. The dashing young member for Loughshane is soon entangled politically and amorously, most memorably with the immensely seductive Madame Max.

In the second title in Trollope’s Palliser series, set in Victorian London, a young Irishman with few prospects arrives to study the law and make his fortune – until he decides that Parliament may better suit his talents and interests. Shaw-Parker’s splendid and stylish reading enlivens both characters and story, and underlines Trollope’s droll wit. In his rich baritone, Shaw-Parker navigates the complexities of British politics and the twisty plot. He animates the large and diverse cast with a range of English and Irish accents and focuses on Finn, a fickle young man whose multiple love affairs add a pleasant diversion. Everyone knows Charles Dickens’s novels from the same period, but few have discovered the pleasures of Trollope’s entertaining novels of English social and political life. This is a good place to start, especially paired with the beautifully filmed BBC production The Pallisers, starring Susan Hampshire and Philip Latham.

If David Shaw-Parker isn’t the most subtly funny Duke of Omnium ever, let’s give up. The Duke’s self-important basso as he courts Madame Max seems to come out of his shoes, and it’s an amazing surprise, because by the time Omnium really enters the story, Shaw-Parker has created so many varied characters and voices that you can’t imagine he’s still got a trick you haven’t heard. Phineas Finn is a rich comedy of manners and politics. It is also every bit as much a marriage story as anything from Jane Austen, but with a young man from the provinces seeking advancement and security in a world where many women have more money and influence than he. This is a deliciously entertaining listen.